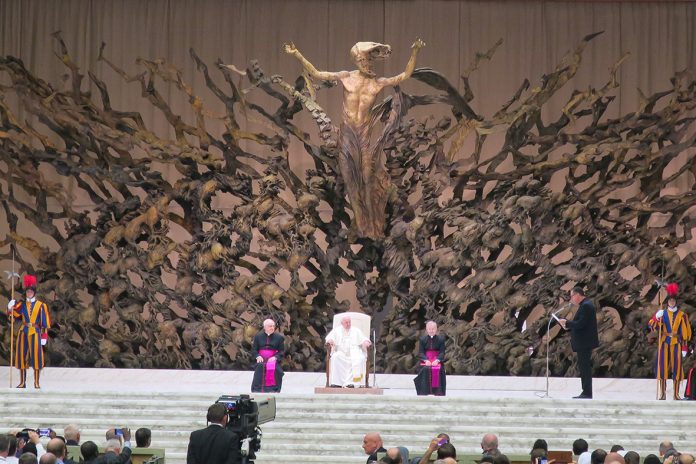 Together with the General Council of the Salesians of Don Bosco, the Rector Major Emeritus, Fr. Pascual Chávez Villanueva, Cardinals,  Bishops, and various Salesian Provincials, also present were the Superior General of the Daughters of Mary Help of Christians, Mother Chiara Cazzuola, with the Councilors in the office; the President of the FMA Past Pupils World Conference, Maria Carmen Castillon; the President of the World Confederation of Don Bosco Past Pupils, Mr. Bryan Magro; the World Coordinator of the Salesian Cooperators, Mr. Antonio Boccia; various representatives of the Salesian Family Groups, young people from the Salesian Youth Movement and families, as well as Matteo Benassi, Mayor of Boretto (RE) with a group from Zatti’s hometown; a group from Viedma, Argentina, where he made the journey of holiness; and one from the Philippines from where the  person who was miraculously cured comes.

As the Rector Major underlined, the protagonists of this event – invited by him to reach Rome from all over the world and present in 600 – are those who share the same vocation as the new Saint, the Salesian Brothers. “The gift is a gift of a great celebration for all of us. Tomorrow will be a very special feast for you consecrated lay Salesians, the Salesians whom Don Bosco wanted in shirt sleeves.”

Taking his cue from a sentence by Romano Guardini, “The stories of faith are as many as there are believers, since each one gives themselves with their own personality.” He continued saying, “so it was for Zatti: faith as personal adherence to God was a personal story for Artemis, leading him to holiness in concrete work, in the care of the sick, in the world of health care”.

He then outlined the figure, taking up the testimony that the Coadjutor himself gave on the occasion of the inauguration of a funerary monument in memory of Fr. Evasio Garrone, a Salesian missionary he considered as the benefactor of his vocation, in which we find the words of the motto of the Canonization, “BELIEVED, because he knew by reputation that Mary Help of Christians helped him in a visible way. PROMISED, because it was always my desire to be of help to my neighbor in some way. And God, having listened to His servant, HEALED.”

At the end of the Eucharistic Celebration, animated by the choir with the Novices of the FMA International Novitiates of Rome and Castelgandolfo, with the students of the SDB Post-novitiate of Rome San Tarcisio, and the young people, directed by Fr. Francesco De Ruvo, SDB, there is a moment of listening to the testimonies while waiting for the arrival of the Holy Father.

Fr. Pierluigi Cameroni, SDB, Postulator General of the Causes of Saints of the Salesian Family, reads the biography of the new Saint, enriched by the testimonies of the doctors and the Chronicle of the School of Viedma, which documents his death with the prophetic words, “One less Brother in the house and one more Saint in Heaven.”  Fr. Cameroni also shares the miraculous fact that determined the success of the Cause, inviting to his side Mr. Renato Narvaez, whose inexplicable recovery led to the Canonization of Artemide Zatti, and his brother Roberto, Salesian Coadjutor, who immediately entrusted him with faith to his intercession.

The arrival of Pope Francis is greeted by the anxious assembly, on the cheering notes of the song “Giù dai colli”, certainly known to him from his Salesian past. The Rector Major, Fr. Ángel Fernández Artime, greeted him, thanking him for having granted this special audience to the pilgrims and devotees of Zatti.

In his discourse, the Holy Father recalls the figure of Artemis from four points of view: as a migrant, his ‘kinship’ with all the poor, as a Salesian Brother, as an intercessor for vocations.

“He lived the total donation of himself to God and the consecration of all his strength to the good of his neighbor. The intense work and tireless availability for the needs of the poor were animated by a profound union with the Lord: constant prayer, prolonged Eucharistic adoration, the prayer of the rosary. Artemis is a man of communion, who knows how to work with others: sisters, doctors, nurses; and with his example and his advice he forms people, shapes consciences, converts hearts.” These are some of the most significant traits, accompanied by his personal experience:

“From when we began to pray through his intercession, while he was Provincial of the Jesuits of Argentina, the number of young coadjutors increased significantly; and they preserved and were very committed”.

Pope Francis ends by emphasizing the importance of this vocation: “Brothers have a special charism that is nourished in prayer and work. And they are good for the whole body of the Congregation. They are people of piety, they are cheerful, hardworking. (…) To you, dear brother coadjutors, thank you, thank you! May you too be always grateful for the gift of this call, which bears a special witness to consecrated life, and thus offer it to young people as a form of evangelical life at the service of the little ones and the poor”.

With the apostolic blessing imparted to all present, this beautiful Family moment closes, preparing all to live the following day with joy and great gratitude to God, the historical event of the elevation to the honors of the altars of Blessed Artemide Zatti, the first non-martyr Salesian Brother to be proclaimed a Saint.

Video of the day

Via Crucis on Good Friday: children are the protagonists

Webinar on the future of Christianity