The Superior General is the bond of communion and the center of unity of all the Communities and Provinces. (cf. C 116)
In her service of animation and government, she is faithful to the Salesian charism and is attentive to the urgencies of the Church and especially to the educational challenges of the new generations so that the Institute may achieve the purpose for which the Holy Spirit raised it: “as a response of salvation to the profound hopes of the young”. (C 1)
She carries out her mission of animation and government, of formation and spiritual guide in the spirit of St. John Bosco and of St. Mary Domenica Mazzarello, being inspired by her who was a Mother and sister among her sisters. She shares her mission with the General Council in a journey of co-responsibility at the service of the FMA Institute.
Mother personally visits the Institute on the five Continents in order to reinforce the bond of communion, strengthen the commitment of fidelity to the Constitutions, and encourage the development of the Salesian charism and of the works in response to the challenges of the Church and of the territory, in the spirit of the Salesian Preventive System.

She is the 10th Superior General of the Institute of the Daughters of Mary Help of Christians.

Born on January 14, 1945 in Plouénan in France, she began her formation for Salesian religious life in Paris, where she was admitted to the Postulancy in 1963. After the Novitiate in Lieusaint (France) and in Casanova di Carmagnola (Turin), she made her religious profession as an FMA on 5 August 1965.

At that time she also accompanied the development of FMA presence in Gabon in Port Gentil, a house opened in 1971, and later enriched by other communities: Oyem and Libreville. Since then, Sister Yvonne feels called by the missionary mandate of Jesus: “Go into the whole world to announce the Gospel”.

Her missionary vocation matures over time and finds confirmation in the explicit request of Mother Marinella Castagno, then Mother General, to go to Lomé in Togo, as Delegate of the Provincials of Spain and France to coordinate the first communities of Project Africa.

She started in April 1990 and in 1991 was appointed Superior of the new West Africa Preprovince, Mother of God based in Lomé (Togo), which at that time included five nations: Togo, Ivory Coast, Mali, Gabon, Equatorial Guinea . Subsequently, the communities of Benin and Camerum will open.

On 5 August 1992, she was appointed Provincial of the new Mother of God Province. During her service of animation, she favored a cordial and formative relationship with the sisters, the accompaniment of the young in formation, and the opening of communities in which to welcome them and prepare them for the mission, the formation of animators and local councils, the creative promotion of works for the education of children, the poorest youth, and women, and collaboration with the various groups of the Salesian Family.

In 1996, at General Chapter XX, she is elected as a Visiting General Councilor. During the six-year period, she visited the communities, meeting the FMA of six Latin American, four European Provinces, and one Korean Province.

In 2002, at General Chapter XXI, she is elected Vicar General.  She collaborates in the animation and government of the Institute with the Mother General, Mother Antonia Colombo; follows the communities directly dependent on the Superior General with wisdom and dedication; coordinates the preparation of formation meetings for new Provincials; encourages the collaboration of the FMA Institute with the Association of Salesian History Historians (ACSSA).
In 2004, she visits the communities of St. Teresa Province of Madrid and in 2005, the Province of Our Lady of Africa in the Democratic Republic of the Congo.

At the XXII General Chapter of 2008 she was elected Mother General and in 2014 (the 6th in which she participated) was re-elected as Mother General for a second six-year term. At the request of her acceptance of the mandate by Sister Ciriaca Hernández, the Chapter Member oldest in Religious Profession, Mother Yvonne emotionally replied: “I accept! Thank you for your trust. The biblical expression that supports me is: “When I am weak, then I am strong”. I entrust myself entirely to Mary and accept her invitation: “Do whatever he tells you”.

Since then, Mother continues to animate and govern the Institute in a spirit of authentic Salesian fraternity and service to life, which she intends to promote in people and in the educating communities; she visits the various Provinces of the world and nourishes everywhere the joy of being an FMA and being called to give life for the proclamation of the Gospel especially to the little ones, to the poor, to women.

Among her guidelines of animation there are some priority considerations: the missionary dimension, vocational animation, the path to holiness, the shared mission with young people and the laity, collaboration with the various groups of the Salesian Family, openness to the Church.

In 2018 she was elected President of the Italian Union of Superiors General (USMI).

The World Feast of Gratitude IFMA

Past Pupils networked with the FMA – Circular

It is time for gratitude

Webinar on the future of Christianity 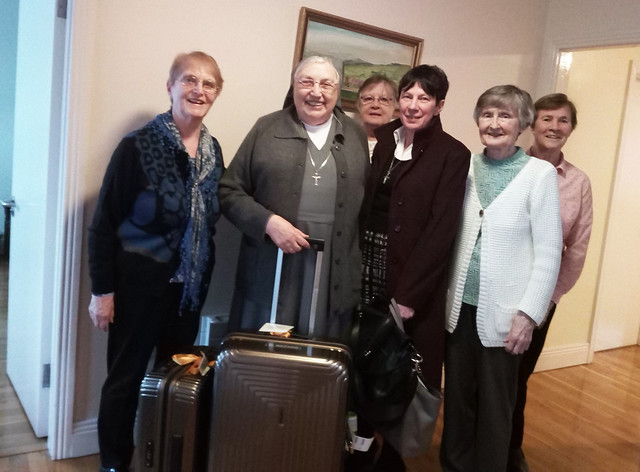