Home Councilor for the Salesian Family

Councilor for the Salesian Family

Since 2008 this Sector is animated and coordinated by Sr. Maria Luisa Miranda, Councilor for the Salesian Family.

Was born in Pueblo, Mexico in 1951.  There are two other sisters in her family who will become like her, Daughters of Mary Help of Christians, and a brother.  Degreed in Spanish Language and Literature, with energy and love she dedicated the first years of her religious life to the young as a teacher in the Middle School.

She later held positions as school Principal, local Councilor, Coordinator of educational ministry on the Provincial Team. She was nominated Community Animator in three different periods and took on the role of Provincial of Mother of the Church Province based in Monterrey from 1993 to 1999. She lived several experiences preaching spiritual exercises and formation courses for the FMA, teachers from various Salesian schools (FMA and SDB), especially on issues related to the Preventive System and Salesian Spirituality. She is invited to participate as a speaker at conferences, study meetings for parents and teachers. While she is the animator of St. John Bosco community in Saltillo, Mexico, during General Chapter 2008, where she is present as Delegate of her Province, the Chapter Assembly elects her as Councilor for the Salesian Family.

At General Chapter XXIII, the Chapter Assembly confirmed her for a second six year term. In accepting the mandate from Mother General, Sr. Maria Luisa said: “Mother, you told us that this is a week of faith. In faith I accept. I entrust myself in a special way to Mary: she will help me to give the feminine and Marian face to the Salesian Family”.

Sr. Maria Luisa is assisted by a Team of Collaborators in the animation of the Sector:

Sr. Gabriela Patiño Osorio, FMA World Delegate, represents the Institute in the Formative animation and accompaniment  of the Past Pupils FMA.

Sr. Lucrecia Uribe, FMA World Delegate of the Salesian Cooperators (ASSCC) and World Animator of  ADMA, collaborates in the Marian animation of the Institute.

The team for the Salesian Family

The Sector for the Salesian Family (AFS) was established at the XX General Chapter in 1996.

The Councilor for the Salesian Family will offer guidelines to enable the Institute  to bring its unique, feminine Marian contribution to growth in communion and collaboration in the Salesian Family.  She will accompany the Past Pupil Association with particular attention  so that its members may live their vocation as lay persons in a responsible and autonomous manner (C. 129 bis).  She will promote rapports with the other groups and movements that work for the promotion of women and in defense of life.

The Acts of GC XX specify the various tasks of the Councilor for the Salesian Family Sector:

At the beginning of its establishment, the Salesian Family Sector dealt with the FMA Past Pupils Association, the Association of Salesian Cooperators, VIDES International, and gave particular attention to the promotion of young women and women in general, promoting the feminine and Marian style of the Institute.

From 1996 to 2008, under the guidance of Sr. Maria de los Ángeles Contreras, Councilor for the SF, the Sector developed and consolidated in its identity.

In these years the Sector, in addition to the ordinary accompaniment of the Associations, offers a very important contribution to the realization of the Project promoted by the UISG (International Union of Major Superiors) to constitute the Talità Kum Network, with the aim of coordinating and strengthening activities against the trafficking of persons on the five continents, favoring collaboration and exchange of information between consecrated persons in 70 countries.

The Sector concretizes the commitment of GC XX, XXI to be present where the fate of the young is decided and the need to defend the rights of all, especially the invitation to witness to the foreseeing love of God in the new frontiers.

In June 2008, the United Nations (UN) recognized the Institute of the Daughters of Mary Help of Christians (IIMA) as an Association with Advisory Status on matters concerning educational issues, and with the possibility of having a voice at the UN Human Rights Council in Geneva and in New York. The same recognition is given to VIDES in 2003.

In this period, the JPIC dimension (Justice, Peace and Integrity of Creation) refers to the Salesian Family Area. The objective of this dimension is to promote and support the integration of the JPIC dimension into the life and mission of religious institutes, members of USG and UISG, at an international level.

In the six-year period from 1996 to 2008, the Sector works to promote synergy between the various subjects and integrate into the Sector with its own specificity.

In GC XXIII, in examining the Constitutions, the Assembly considered it appropriate to leave to the Salesian Family Sector the sole task of coordinating and animating the various groups of the Salesian Family, and giving to the Youth Pastoral Sector Vides International, the Office of Human Rights, and JPIC.

The Councilor for the Salesian Family will offer guidelines to enable the Institute  to bring its unique, feminine Marian contribution to growth in communion and collaboration in the Salesian Family.  She will accompany the Past Pupil Association with particular attention  so that its members may live their vocation as lay persons in a responsible and autonomous manner (C. 129 bis).

At GC XXIII, in dialogue with the Rector Major Fr. Pascual Chávez, it was considered appropriate to resume the animation of the Association of Mary Help of Christians (ADMA).
At the end of the Chapter, the field of work and animation of the Salesian Family Sector remained well defined: the interrelation with the Salesian Family and, in particular, the animation and accompaniment of the three Associations: FMA Past Pupils, SSCC, and ADMA

This is an organ of animation, formation, and coordination established by  GC27 of the Salesians of Don Bosco and directly dependent on the Rector Major. Its purpose is to animate the Congregation with regard to the Salesian Family and to promote the communion of the various groups belonging to it, respecting their specificity and autonomy.

The members of the Secretariat are:

The Salesian confreres who have tasks of animation in the groups of the Salesian Family for which the Salesian Congregation has charismatic responsibility.

Charismatic Families in and for the Common Home 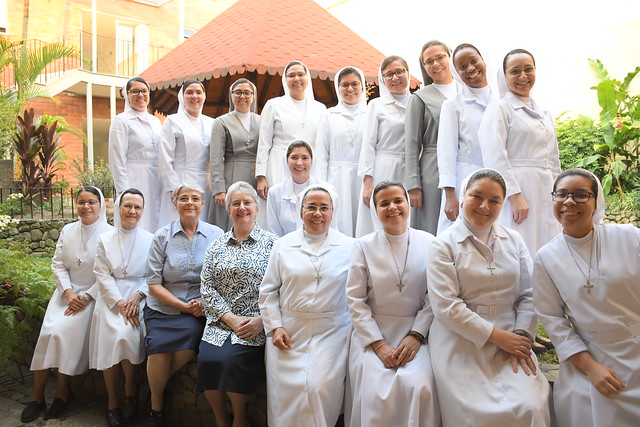