“The Councilor for formation animates and promotes the integral and ongoing formation of the Daughters of Mary Help of Christians with regard to the values and needs of our specific vocation in the Church.  She will devote particular attention to the period of initial formation.” (C. 128)

She was born in Santa Cruz de Tenerife in the Canary Islands, Spain on 27 October 1952.

She is a student at Hogar Escuela of Tenerife. In this Salesian environment, she carries out her studies from Primary School up to High School. Her great desire is to carry out the mission of teacher and educator, giving the children the good she has received

The experience of those years helped her form herself as a Salesian educator. At school, she not only studies but is fully involved in the oratory, in sports, and participates in faith formation groups, where her knowledge of and enthusiasm for Jesus grow more and more. Together with the sisters and other young women, she dedicates herself to the mission in the peripheries, where she meets many poor children and works as an animator in the Oratory. Everything that lives, challenges you in your search for God’s plan for you. These rich experiences lay the foundation for her life and prepare her to say ‘yes’ to the call of God, attracted also by a great love and enthusiasm for Don Bosco and for Mary Mazzarello. She made her first profession on August 5, 1978 in Madrid.

During the period of Temporary vows, she attended the two-year Salesian Spirituality Course at the Pontifical Faculty of Educational Sciences “Auxilium” in Rome. She later obtained the Degree in Theology at the Theological Studies Center of Seville.
She attended a three-year Formation Course for Directors of Spiritual Exercises at the University of Salamanca, organized by the Jesuits. This very valuable experience provides her with elements and qualities to carry out her future mission to accompany and animate the Spiritual Exercises for the Sisters and for the young.

She assumes tasks of animation in various communities of the Province, above all in houses of formation, accompanying the formation of aspirants and postulants.
From the very beginning, she collaborates in the realization of Mornese Project in Spanish and accompanies the animation of the different groups of sisters, laity, and young people, organized both by the Center of the Institute and by her own Province.
In the period in which she is Provincial Coordinator for Formation, she coordinates the ongoing formation course for the FMA of Spain and Latin America at Sanlúcar la Mayor.
She was elected Councilor for Formation during General Chapter XXIII. In giving her adherence to the request of Mother, Sister Nieves says: “I learned from Mother Mazzarello to always say YES, even when things go beyond what may seem possible for my strength. Thus we see God’s action clearer. With this trust I say YES”.

In the animation of the Formation Sector, Sister Nieves is assisted by collaborators:

The Formation Sector undertakes to adopt a style of animation that promotes the vocational unity and quality of the educational mission. It implements coordination for communion through reflection and research, in collaboration with the other Sectors and with the Visiting Councilors.

Special care is taken of the formators so that, in fidelity to the criteria dictated by the requirements of the charism, they can be accompanied in their journey of growth and in the assumption and implementation of the ministry entrusted to them, also through formative proposals offered by the Sector.
It promotes the inculturation of the Formation Plan, taking into account the internationality of the presences and the intercultural face of the communities.

Formation is in itself a “progressive assimilation of the sentiments of Christ”. It is a journey that lasts throughout life and involves the whole person, heart, mind, and strength to make it similar to the Son who gives Himself to the Father for humanity. It is “participation in the action of the Father who, through the Spirit, molds in the heart […] the sentiments of the Son”.

In our life as FMA formation assumes the characteristics of the specific experience of the Holy Spirit that Don Bosco and Mother Mazzarello transmitted to us and which we personally and in community, have the duty to live and develop in harmony with the Body of Christ which is in continual growth (C. 77).

A Yes that lasts over time

Today Mother writes a letter for You!

The personal encounter: a tool for personal and community growth

Being and becoming new wineskins 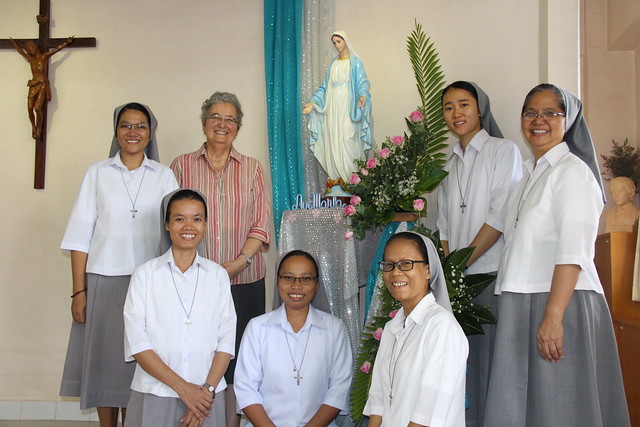