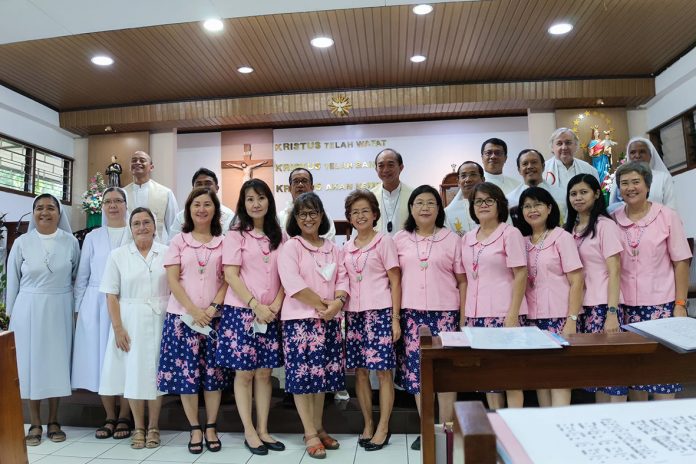 Giacarta (Indonesia) – On 24 September 2022, in the monthly commemoration of Mary Help of Christians, nine aspirants from the parish of St. John Bosco in the north of Jakarta, made the promise as members of the Association of Mary Help of Christians (ADMA). After a year of preparation with formation sessions and activities, the first ADMA Queen of Peace group of Jakarta was officially born.

The Eucharistic Celebration was held in the chapel of the headquarters of the Vice Province of San Luigi Versiglia (INA) of the Salesians of Don Bosco of Sunter, presided over by the Vicar, Fr. Lino Belo, SDB, and concelebrated by other SDBs, including Fr. Noel Villafuerte, Provincial Delegate of the Salesian Family and Fr. Tarsisius Trianto, ADMA Delegate. Also present were the Daughters of Mary Help of Christians of Queen of Peace Community of Jakarta, seat of ADMA, of the Province of St. Mary D. Mazzarello (TIN), including the ADMA Spiritual Animator, Sr. María Dolores Ruiz, FMA, some Salesian Cooperators and their families.

ADMA, founded by Don Bosco in 1869, is an association of lay people who all over the world faithful to the Founder’s Charism, make their commitment to live daily life by imitating Mary and placing themselves as children under her mantle. The Association of Mary Help of Christians offers an itinerary of sanctification and the Salesian apostolate. Don Bosco founded it to involve the laity in the spirituality and mission of the Salesian Congregation as the second group of his Work. It values in a special way the cult of the Eucharist and devotion to Mary Help of Christians, in all forms, public and private, approved by the Church. Don Bosco’s entrustment to Mary Help of Christians finds in the Association one of the simple and practical expressions for the propagation of the faith of the working class. ADMA works in communion and fidelity to the Pastors of the Church and in collaboration with other ecclesial groups, especially with those of the Salesian Family.

ADMA members feel Don Bosco’s words alive: “We Christians must unite in these difficult times. Being among the many who do good animate us without realizing it.” The experience “shows us the very bright world that Mary continued from heaven and with the greatest success, the mission of Mother of the Church and Help of Christians that she had begun on earth.”

ADMA lives the maternal and active presence of Mary and the commitment of the members at the service of the Kingdom of God, now also in Jakarta, where Christianity is a minority, but it is lived in an authentic way.

In October 2022, another group of 8 ADMA aspirants began formation and the 9 members of ADMA Queen of Peace, their companions on the journey as courageous pioneers, entrust themselves to the prayers of the whole Salesian Family so that Mary Help of Christians, Mother and Teacher, may continue to spread her mantle over this city of 10 million inhabitants, mostly Muslim, and over all of Indonesia.

Reading marathon to give women a voice

Message of the Rector Major to the youth of the SYM