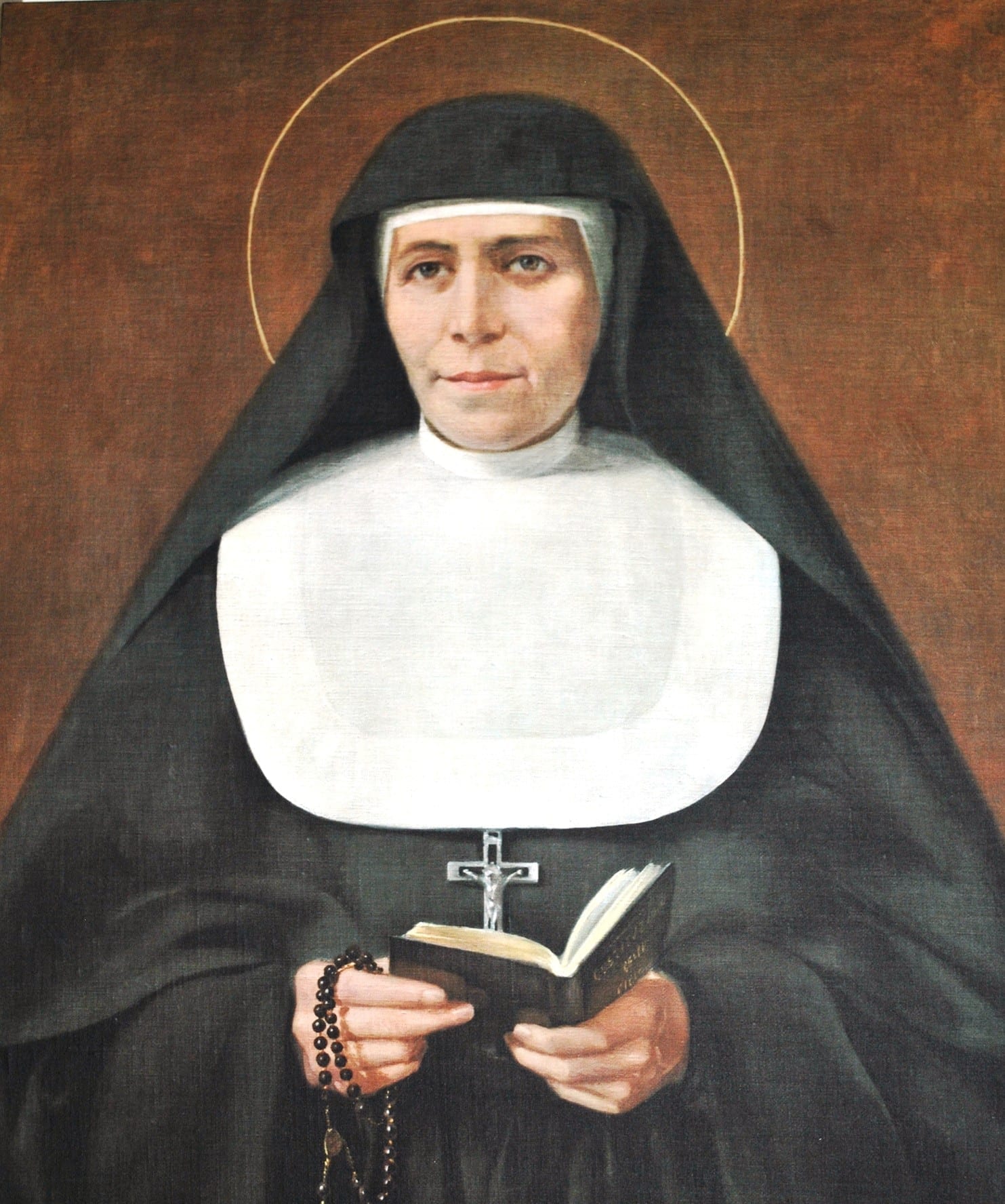 St. Mary Domenica Mazzarello born May 9, 1837 in Mornese (Italy) and died May 14, 1881 in Nizza Monferrato (Italy). Co-founder, together with Don Bosco, of the Institute of the Daughters of Mary Help of Christians. Beatified November 20, 1938; Canonized June 24, 1951.
Mary Domenica was born into a large peasant family. Equipped with uncommon physical strength, as a girl she worked in the fields with her father Joseph. In the family she is formed to a profound sense of God, tireless industriousness, and in that marked practical sense and depth of judgment which she later manifested also as Superior. In 1855 she enrolled in the Association of the Daughters of the Immaculate, cultivating a profound apostolic spirituality.In 1860 the town of Mornese is struck by typhus. Her confessor, Fr. Domenico Pestarino, suggests that she go to take care of some relatives in need of assistance. Mary accepts, although she is aware of catching the infection, and in fact, she becomes ill. She recovered, however, she is forced to leave her farm work, not only due to the loss of the physical strength that she enjoyed before, but also because a clear intuition arises in her that she considers a call from God. She dedicates herself to the education of the girls of the town by opening a sewing workshop, a festive oratory, and then a home for girls without a family. She involves her friend Petronilla in her project and learns the skill of a seamstress to teach poor girls not only to sew, but above all to know how to love God. Later, in a mysterious vision, she sees a large building with lots of girls running around a courtyard, and hears a voice: “I entrust them to you.”
She then welcomed the first orphans whom she cares for tenderly like a mother, assisted in this mission by some other young women belonging to the Daughters of the Immaculate. In 1864 Don Bosco from Turin arrived in Mornese with his young people on the occasion of an autumn walk and, meeting Fr. Pestarino who had become Salesian the year before, felt the need to support his desire to open a school for the boys of the town and of the surrounding areas. On that occasion, Mary Domenica perceived that she was in the presence of a saint and said: “Don Bosco is a saint, and I feel it.”
Pope Pius IX encourages Don Bosco, who for years has cultivated in his heart the project of founding a female institute, to decide to do for the girls what he is doing for the boys. With the wise collaboration of Fr. Pestarino, he chose the first fundamental stones of the future Institute from among the Daughters of the Immaculate. They will live in the newly built school in Mornese, which becomes the home of the new foundation.On 5 August 1872 the first eleven young women made their religious profession in the hands of the Bishop of Acqui, Monsignor Giuseppe Sciadra, in the presence of Don Bosco. The Institute called Daughters of Mary Help of Christians grows rapidly and Sister Mary Mazzarello as the Superior proves to be a skilled formator and teacher of the spiritual life. Between her and Don Bosco there is a profound harmony on a charismatic level.  Mary Domenica has a strong educational ability, the gift of serene and reassuring cheerfulness, and the art of involving other young women in the commitment to dedicate themselves to the promotion of women so that they can be in the family, in the Church, and in society good Christians and honest citizens.
In 1877, sharing the missionary ardor of the Salesian confreres, the first six FMA left for missions and founded the first community in Uruguay, which was followed by houses in Argentina after a year.
Sr. Mary Domenica, at 44 years of age contracted a severe form of pleurisy, and died on May 14, 1881 in Nizza Monferrato, where the first FMA community had been transferred two years earlier, from then it is called the Motherhouse.
To her Daughters, she left behind an educational tradition imbued with Gospel values: the search for God known through enlightened catechesis, ardent love for Jesus in the Eucharist, and filial trust in Mary Help of Christians, sense of responsibility in work, honesty, humility, joy, moderate lifestyle, and total self-giving in the search for the true good of the girls, especially the poor and needy both at home and in the various mission countries .
Mornese, places of the Saint
1 of 12