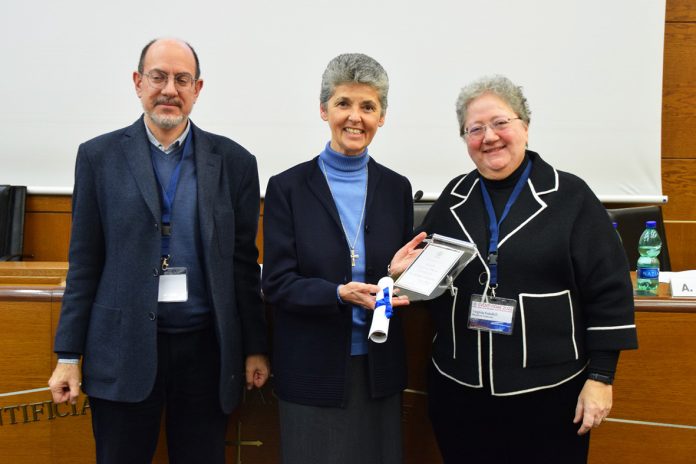 Rome (Italy). On 23 November 2022, during the 77th National Assembly of FIDAE, the Italian Federation of Catholic Primary and Secondary Schools,  held in Rome at the Pontifical University of Santa Croce from 23 to 25 November 2022, on the theme: Let’s reimagine together the face of the educational future –

FIDAE Merits were awarded to seven Institutes and Congregations and to two religious engaged in the educational mission.

Among these, the Institute of the Daughters of Mary Help of Christians received a merit for the 150th anniversary of the Foundation (1872-2022). This is the reason for the conferral:

“The inspiration comes from afar and has its roots in a small town in Monferrato, Mornese, where a group of young women is dedicated to the education of girls, taking care of their harmonious religious and moral human formation. On 5 August 1872, the Institute of the Daughters of Mary Help of Christians took shape from the meeting of Mary Mazzarello with Don Bosco. Don Bosco speaks from the beginning of “pupils to be instructed and educated” and, in fact, the educational action of the FMA immediately finds in the school a concrete form of service to girls and boys of the working class and a precise methodological modality and didactic.

In a period in which the inadequacy of the municipalities in providing elementary education is manifested, among other things, also in the quantitative and qualitative insufficiency of the premises that were used as classrooms, and the provision of good teachers, so much so that in 1877, the The Municipality of Mornese is studying the possibility of entrusting the municipal girls’ schools to the FMA. Thus the FMA Institute fits into the commitment of Catholics to respond to a necessary cultural elevation of the working class and of women, in particular by ‘doing for girls what the Salesians do for boys’.

Because Don Bosco is convinced that in education cultural formation, the discovery of the meaning of life and the ability to relate adequately with others and with reality are not only useful but essential. He considers education as a dutiful response to the vocation and mission that God entrusts to each person with a view to their fulfillment and that of the society in which they are inserted. Mother Mazzarello and the first sisters followed him, embodying his educational method with an exquisitely feminine genius.

The schools multiplied in a few years, spreading rapidly in small as well as large provincial centres. Today they are present on all continents, from nursery schools to secondary schools and universities. In Italy their presence is still important”.

The Vicar General of the FMA Institute, Sr. María del Rosario García Ribas, in the name of the Mother General, Sr. Chiara Cazzuola, of all the FMA, and of the Educating Communities, accepted the recognition, awarded by the FIDAE President, Virginia Kaladich, as she expressed her gratitude, “Thank you because these words of the future, of creativity, of hope, are also the words that guide us every day. Thank you for everything you do”.

With these merits, as explained by Fr. Vitangelo Denora, Member of the FIDAE National Council and President of FIDAE Sicily, we wanted to “give credit to the many people who are involved in daily school life, giving voice to those concrete witnesses of the beauty of doing school by rewarding faces and stories”.

The FMA of the SLK Province celebrate the 150th anniversary of...