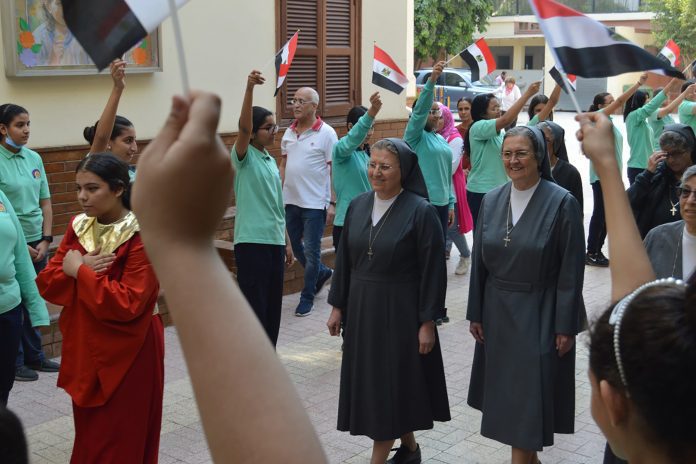 Holy Land. From 12 to 25 November 2022, the Superior General of the Institute of the Daughters of Mary Help of Christians, Mother Chiara Cazzuola, is visiting the Province of Jesus Adolescent (MOR), which includes seventeen Houses in five Middle Eastern countries: Lebanon, Syria, Jordan , Israel, Egypt.

On the evening of 21 November, having visited Lebanon, Jordan and the Holy Land, Mother Chiara was welcomed at the Cairo airport in Egypt, by the FMA of Sacred Heart Community of Heliopolis and by the Provincial of the MOR Province of the Salesians of Don Bosco, Fr. Alejandro Leon José Mendoza.

On 22 November the Provincial presided over the Holy Mass, comparing her visit to that of the prophets Joseph, Jacob, and Moses, and the visit of Jesus and the Holy Family to the land of Egypt. He concluded by saying, “Today the Holy Mass is offered for her, so that she can walk according to the will of the Lord.”

Subsequently, Mother met teachers, students, and past pupils of  Mary Help of Christians School from whom she received a warm welcome and some gifts. Mother Chiara thanked everyone for their educational commitment. Then there was  time for  meeting with each FMA.

In the afternoon, she met the staff, thanking them for the work they put into making the environment welcoming. She was welcomed by the Educating Community and by the students of Mary Help of Christians School in Cairo, Shubra, with a solemn ‘pharaonic march’ and an Egyptian queen’s dress. She wished them to live their experience in the School with docility to the teachers and sisters who take care of them, “Your joy is very contagious. You are the most important thing in this house,” she told them.

On 23 November Mother Chiara was accompanied by the Provincial, Sr. Charlotte Greer, to Mary Help of Christians Community of Alexandria. The pupils and some teachers welcomed her along the road with flags, posters, and joyful expressions. Also present was the Head of the Catholic Schools of Egypt.

Arriving at the FMA House, they accompanied her to attend a small event offered by the School with balloons left to soar upwards as a sign of hope, fraternity, and joy. At the end, Mother turned to those present, taking up the words of the last song, reminding them to have their feet on the ground and their hearts in heaven, in order to be able to live their profound ideals realistically and to have lofty goals to achieve with a big heart.

Mother Chiara also had the opportunity to visit the Library of Alexandria in Egypt, the oldest in the world, welcomed with all the honors by the Director General. In the afternoon, she received the sisters of the two communities of Alexandria and in the evening she returned to Cairo, to Mary Immaculate community of Heliopolis.

On 24 November she visited the pupils, teachers, and staff of Saint Clare’s College, celebrating her arrival. In the late afternoon, the FMA of the three communities present in Cairo gathered for a time of fraternity and for a conference with Mother, who spoke of the post-chapter journey, emphasizing the word “presence” as closeness to the young, to listen to them and take care of them. She also said that young people want the presence of an authentic Daughter of Mary Help of Christians, therefore one should not be afraid to be close to them.

She then underlined the importance of formation, which takes place where one lives, saying that the holiness of daily life consists in being a presence that listens and accompanies like Mary. In order to be this way among young people, one must first experience it in the Community, trying to to be motherly and to have positive relationships of help and support. She also said, “The land of Egypt is so beautiful and so rich in culture and history. You are called to bring the best; may that light never go out. It could be an Olympic flame or the light of a small candle, no matter the size or the effect, but may the light always shine.” The day ended with Holy Mass celebrated by Fr. Peter Oluwatosin of the African Missionary Fathers.

The visit of Mother Chiara Cazzuola concluded on 25 November  with the Eucharistic Celebration presided over by Msgr. Claudio Lorati, Apostolic Vicar of Alexandria of Egypt. The Community bid farewell to  Mother, thanking her for this visit which left so much joy in the hearts of the FMA and all the people who met her. She was accompanied to airport by the Provincial, Sr. Charlotte Greer.

Visit of Mother Yvonne Reungoat to “Our Lady Queen of Ireland”...