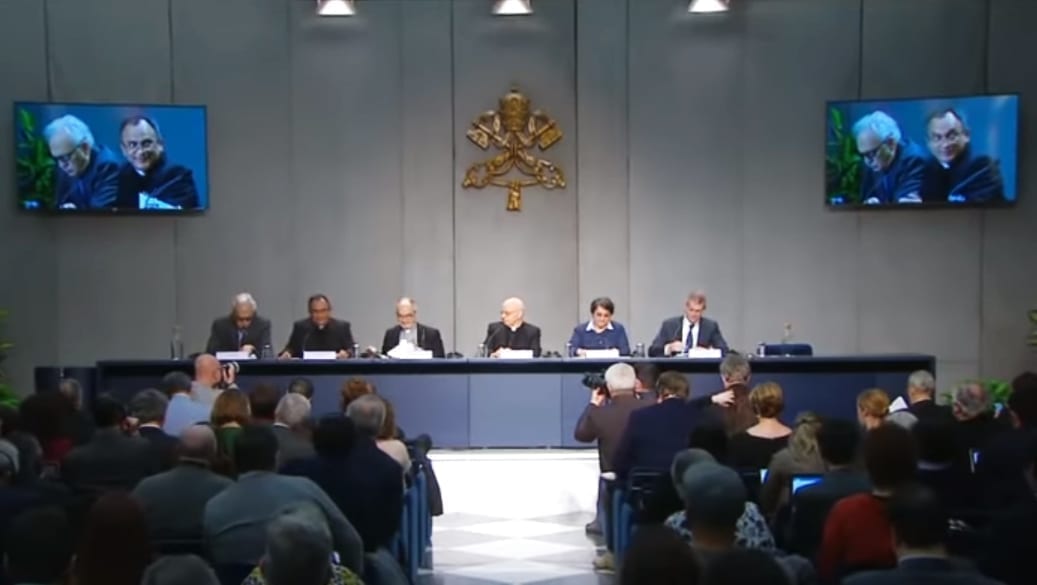 Rome (Italy) On 12 February 2020, the Post-Synod Exhortation Beloved Amazon,   was presented at a Press Conference for journalists in John Paul II Hall of the Press Office of the Holy See.  Card. Lorenzo Baldisseri, Secretary General of the Synod of Bishops, had the task of tracing the path of the Special Synod for the Pan Amazon Region: new paths for the Church and for an integral ecology, from the preparatory phase to the celebratory phase, from 7 to 27 October 2019 in Rome, which ended with the drafting and approval of the Final Document, up to the publication of the Apostolic Exhortation. With Querida Amazonia, the Holy Father offers the resonances that this Synod has provoked in him, and in this light, re-read the entire synodal process and the Final Document.

A video prepared by the Migrants & Refugees Dicastery for the Service of Integral Human Development helps us to enter into the contemplative dimension, hoped for by Pope Francis, which favors a real, non-ideological understanding of the text.

The Holy Father addresses Querida Amazonia to the whole world, “on the one hand, to help awaken affection and concern for this land which is also ‘ours’ and invite us to admire it and recognize it as a sacred mystery; on the other, because the attention of the Church to the problems of this place obliges us to briefly resume some themes that we should not forget and that can inspire other regions of the earth in the face of their own challenges” (QA 5).

Fr. Adelson Araujo dos Santos, Theologian and Professor of Spirituality at the Pontifical Gregorian University, originally from Manaus, Brazil, shows his appreciation for the poetic expressions and quotations of Latin American poets that enrich the exhortation. Then he comments on the document from the theological point of view, starting from the title Querida Amazonia, “which indicates that the Pope has wanted from the beginning of the exhortation to tell the people of the Amazon that they are loved by him, together with all the other creatures, of the biodiversity present there. It is this loving that made him take the initiative of convoking a special Synod on that Region, calling us to take care of this vital part of the planet, following the example of Jesus ‘who first takes care of us, and teaches us to take care of our brothers and sisters and of the environment that He gifts us with every day’ (QA 41) because those who love take care.“

Instead of presenting concrete conclusions or proposals on this Region, Pope Francis prefers to share four dreams about the Amazon – a social dream, a cultural dream, an ecological dream, and an ecclesial dream – using the four dimensions of the Synod that he himself identified in the talk to the first General Congregation, 7 October 2019. It is not the first time that the Pope speaks of dreams and “recalls the value and importance of dreaming and not being afraid to dream differently, to show other dreams that this world does not offer us; dreams of generosity, of service, of purity, of strength, of forgiveness, of fidelity to one’s vocation, of prayer, of struggle for justice and for the common good, of love for the poor, dreams of friendship.”  Already Pope Emeritus Benedict XVI used the same linguistic resource in his Magisterium, teaching young people that “No dream is unattainable when the one who arouses it and cultivates it in the heart is the Spirit of God.” It is language that follows the biblical tradition, which sees dreams as a privileged tool through which God reveals His Will. In every dream shared by the Pope, the call to conversion can be recognized.

Sr. Augusta de Oliveira, Vicar General of the Servant Sisters of Mary Reparatrix, who are present for 100 years in the Amazon Region, sees in the Pope’s 4 dreams the 4 pillars that make up the Common Home, which allows us to walk in synodality: “We dream with and for the Amazon”. In the Exhortation, Pope Francis also speaks of the strength and the gift of women: “many communities and villages along the river and in the forests exist and are maintained thanks to the strength and perseverance, courage and generosity of many women who transmit faith through catechesis, baptism, in missionary groups, and an active pastoral presence. In the most difficult and remote areas, we meet the female presence that animates, supports, and serves.”  The religious also mentions the presence of the missionaries and the numerous martyrs – men and women religious, priests, and lay people – who have given and continue to give life to the point of shedding their blood. Precisely today, we recall the martyrdom of Sister Dorothy Stang, murdered in Anapu, in the Brazilian state of Parà, on February 12, 2005, who represents the commitment of many women in this region to the point of giving their life.

Professor Carlos Nobre, Scientist, Nobel Prize 2007, Member of the Environmental Sciences Commission of the National Council of Scientific and Technological Development, expresses his gratitude to Pope Francis for the openness to the participation of scientists in the Synod and for this Apostolic Exhortation that could be considered ‘the daughter of Laudato sì’  and says: “On behalf of the scientific community, I would like to fully support the socio-ecological proposals of Querida Amazonia.”

Msgr. David Martínez de Aguirre Guinea, Bishop of the Vicariate of Puerto Maldonado, Special Secretary of the Synod, speaks from Puerto Maldonado via direct video: “The exhortation is a love poem, dedicated to the entire universal Church and to all men and women of good will. It is a poem that weeps over crimes and injustices, which also marvels at the beauty of these forests and their inhabitants. The Pope does not offer us a goal, a closed path; he wants it to be light on a path that continues. In this way, the exhortation generates processes.”

Cardinal Michael Czerny, Under-Secretary of the Migrants and Refugees Section of the Dicastery for Integral Human Development, Special Secretary of the Synod, clarifies the nature of the two documents. Querida Amazonia is a Magisterial Document and belongs to the authentic Magisterium of Pope Francis, with the authority which derives from it. “Amazon: new paths for the Church and for an integral ecology” is the final document of a Special Assembly of the Synod of Bishops, consisting of proposals that the Synod Fathers voted on and approved and which were entrusted to the Holy Father. In the introduction of Querida Amazonia, the Pope encourages us to read the final document to let ourselves be enriched and challenged by this work.

“I dream of an Amazon region that fights for the rights of the poor, the original peoples and the least of our brothers and sisters, where their voices can be heard and their dignity advanced.

I dream of an Amazon region that can preserve its distinctive cultural riches, where the beauty of our humanity shines forth in so many varied ways.

I dream of an Amazon region that can jealously preserve its overwhelming natural beauty and the superabundant life teeming in its rivers and forests.

I dream of Christian communities capable of generous commitment, incarnate in the Amazon region, and giving the Church new faces with Amazonian features”. (QA 7)

Assembly of the AMCG-Charismatic Families