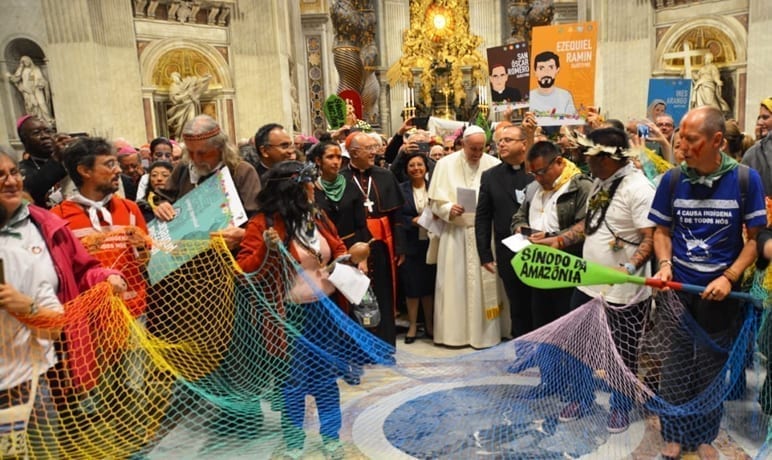 Rome (Italy) On February 12, 2020, at 1.00 pm, in John Paul II Hall of the Holy See Press Room, the press conference will be held to present the post-Synodal Apostolic Exhortation of Holy Father Francis.

Querida Amazonia – Dear Amazon, an adjective that expresses a strong closeness, as though Pope Francis addressed her as a person – is the title of the Exhortation, the result of the Special Assembly of the Synod of Bishops for the Pan-Amazonian Region of the Amazon: new paths for the Church and for an integral ecology held in Rome from 6 to 27 October 2019.

The awaited document comes at the end of a journey inaugurated by Pope Francis on 15 October 2017, when he announced the convening of a Special Synod for the Amazon, which was followed by his visit to Puerto Maldonado in the heart of the Peruvian Amazon rainforest, on 19 January 2018. The synodal listening process and a survey among the Amazonian communities, which began in the same Region, led to the drafting of the Working Document of the Synod of 17 June 2019. After the three weeks of the Assembly, from the discussion among the 184 synod fathers, including 55 auditors coming mostly from the Pan-Amazon region, the Final Document was produced.

Among the participants at the Synod as auditors, there were two Daughters of Mary Help of Christians, Sr. Maria Carmelita de Lima Conceição, Provincial of Laura Vicuña Province  of Manaus (BMA) and Sr. Mariluce dos Santos Mesquita of St. Teresinha Province (BMT).

February 12 is also a significant date on which occurs the anniversary of the death of Sister Dorothy Stang, missionary of the congregation of the Sisters of Notre Dame of Namur, killed with six pistol shots at dawn on February 12, 2005 in Brazil,  in the middle of the Amazon rainforest, where she had become a humble presence and a reference point for peasant families at the mercy of the great economic interests that sought to wrest the land from them.

He does not forget the cry of the poor

28th Day of prayer and fasting in memory of the missionary...