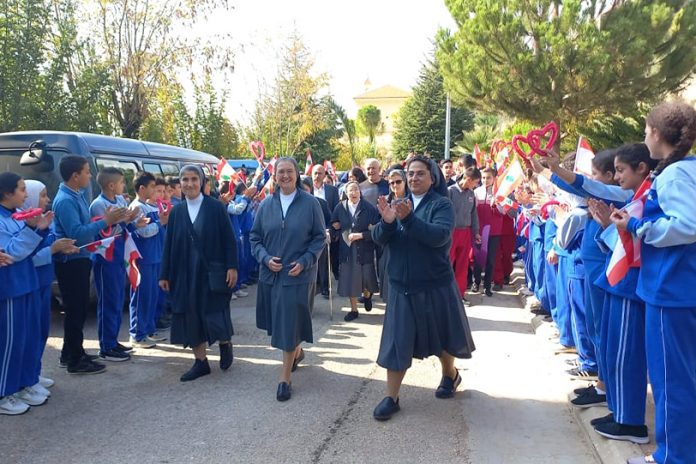 Lebanon (Middle East). From 12 to 25 November 2022, the Superior General of the Institute of the Daughters of Mary Help of Christians, Mother Chiara Cazzuola, is visiting the Province of Jesus Adolescent (MOR), which includes seventeen Houses in five Middle Eastern countries: Lebanon, Syria, Jordan, Israel, Egypt.  Mother General had not visited this Province since 2008.

12 November, Mother Chiara arrived at the airport in Beirut, Lebanon, late in the evening. She was welcomed by the Provincial, Sr. Charlotte Greer, and the Animator of Mary Immaculate Help of Christians Community of Kahale, Sr. Lina Abuna.

The following day began with prayer with the community, followed by a meeting with a first group of sisters from Lebanon and some from the houses in Syria who for bureaucratic reasons could not be included in the visit and yet were able to join her in Lebanon.

In an atmosphere of joy and fraternity, Mother specified the objective of the encounter in which she would give priority to listening to all the sisters in the different situations where they find themselves living. After giving some news on the FMA Institute and on the activities of the General Council, specifying their attention and prayer for the most difficult realities of the world, Mother underlined the importance of being in the midst of young people, even of different cultures and nationalities, without being afraid to dialogue with them.

Returning to the category of “presence” of the 24th General Chapter, she said, “it is a rediscovery of what our identity is as Salesian FMA, strongly Marian. Our Constitutions ask us to be helpers too; it means to bring help. To bring help you need to ‘be there’; this is why the need for presence is underlined. This is how Mary is at Cana.” Mother then reiterated how fundamental the community is in the life of the FMA. “The community is constitutive. If we lose the emotional connection, we would be pieces of marble! We are people, with the need to love and to be loved. So, the community relationship is fundamental for us, it constitutes us.” She then left room for some resonances.

During the day, she began to receive the FMA personally, also finding the way to meet a group of Salesian Cooperators and animators of the oratory-youth center, whom she encouraged to continue collaborating with the sisters for the good of many young people.

On November 14, Mother Chiara reached Bl. Laura Vicuña Community of Hadath-Baalbek, where she was welcomed triumphantly by the students of the School. She left them a message, “I see that you have very beautiful eyes, and this means that you are good people. I wish you to grow not only in stature, but in your inner life! I thank your teachers and your Sisters so much for their commitment with you, and because they love you so much.” In Hadath-Baalbek, she also met the second group of Sisters in Syria.

In the late afternoon, she went to Mary Help of Christians Community of Kartaba. In the Good Night, she spoke of the importance of the community encounter and the role of the community animator, placing the emphasis on community Holiness.

On November 15, Mother’s day began with a pilgrimage, together with the Provincial, to the Shrine of Our Lady of Lebanon in Harissa, the most important in the country, where she entrusted the FMA of the Province to Mary.

She then joined Mary Help of Christians Community of Tabarja, making herself available to the FMA and was also welcomed by the pupils of the primary school. Among the pupils, there was a little girl who has a mother from the Ukraine. Her Mother took a picture of her with her, as a sign of unity and solidarity, promising prayers for the country tormented by war. The little girl thanked her with tears in her eyes. The meeting ended with the offer of sweets, always appreciated by the children.

After lunch, Mother Chiara concluded her visit to the Lebanese land, expressing her gratitude and encouraging the communities to persevere in the faith, despite the difficulties, relying on the importance of the presence of the FMA among the people. She was then taken to the Beirut airport, from where she departed for Amman, Jordan.