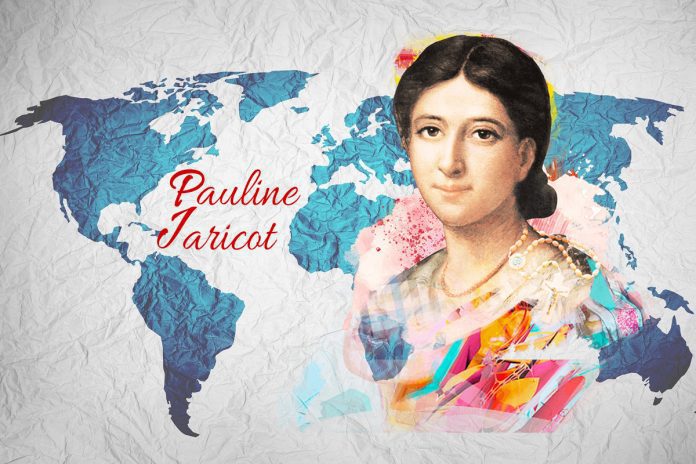 Rome (Italy). On 22 May 2022 at Lyon, France, the Venerable Pauline Jaricot (1799-1862), founder of the Living Rosary Movement, and of the Association for the Propagation of the Faith, today Pontifical Work of the Propagation of the Faith, will be beatified during the Eucharistic celebration presided over by the Prefect of the Congregation for the Evangelization of Peoples, Cardinal Luis Antonio Tagle.

The Missions Sector of the Institute of the Daughters of Mary Help of Christians marks this important ecclesial moment in the missionary journey of the universal Church, with numerous initiatives throughout the world to make her charism and her evangelizing work known.

Coming from a wealthy Lyonnais family, Pauline underwent a dazzling conversion at the age of 17. She consecrates her life to God with a solemn vow in the chapel of the Virgin of Fourvière in Lyon. She undertakes to alleviate the miseries that surround her, multiplying initiatives such as the Living Rosary, a chain of prayer within everyone’s reach with three objectives: to pray for those who find it difficult to pray; to fight with prayer against the evils that afflict society; to form centers of missionary communion.

Having learned of the critical situation in which many missions around the world were living, she decided to get in touch with the missionaries, to make their needs known, and to support them through prayer and material help. At the age of 19, she organized a ‘fundraiser’ for the missions together with her father’s workers, thus inventing the first missionary social network.

Organized in groups of ten, one hundred, and one thousand, the donors met to personally offer their money and exchange news on the missions, creating in turn dozens more. The system was institutionalized in 1882, with the creation of the Work of the Propagation of the Faith, and very rapidly it expanded throughout France, Europe, and then throughout the world.

In 1922, one century after its foundation, Pope Pius XI transformed the Work of the Propagation of the Faith inspired by Pauline in Pontifical Work and its headquarters was moved to Rome. In 1926, the same Pope paid homage to Pauline’s missionary genius and introduced the cause for her Beatification.

In the same year, for the first time, the Church is called to celebrate World Mission Sunday, established for the penultimate Sunday in October. This young laywoman invented the first missionary social network and encouraged everyone to be creative and to create networks in the local Churches, involving the laity and all the people of God.

One of the aspects highlighted by Pope Francis in the Message sent to the Pontifical Mission Works on the occasion of the opening of the General Assembly which takes place in Lyon from 16 to 23 May 2022, recalling the imminent Beatification of Pauline Jaricot, on the Bicentenary of the Pontifical Society of Propagation of the Faith, is missionary conversion:

“The goodness of the mission depends on the journey out of oneself, on the desire not to center life on oneself, but on Jesus, on Jesus who came to serve and not to be served (cf. Mk 10:45). In this sense, Pauline Jaricot saw her existence as a response to the compassionate and tender mercy of God. From her youth she sought identification with her Lord, also through the sufferings she went through, in order to ignite the flame of His love in every person. Here lies the source of the mission, in the ardor of a faith that is not satisfied and which, through conversion, becomes imitation day by day in order to channel God’s mercy onto the roads of the world.”

Pauline Jaricot, creativity at the service of the Universal Church

The Pontifical Mission Societies (PPOOMM) are a worldwide network at the service of the Pope to support the mission and the young Churches with prayer and charity. There are four Pontifical Mission Societies. The Society of the Propagation of the Faith, the Society of the Holy Childhood and the Society of St. Peter the Apostle were born in France in the 19th century, two of which from initiatives of women who were passionate about mission. In particular, Pauline Jaricot, the founder of the 1st Society in 1822, expressed the fundamental principle: to pray and offer for the work of evangelization of the Church. The fourth Society, the Pontifical Missionary Union, was born in the early 1900s. In 1922 Pope Pius XI gave the Societies the title of “Pontifical”. Thus the Pope recognized the charisma of the Societies, made them his own and made them his instrument for supporting, with prayer and charity, the missio ad gentes of the Church. Through them the Pope takes care of the many pastoral needs of young Churches.

Be “networks of salvation” for victims of trafficking