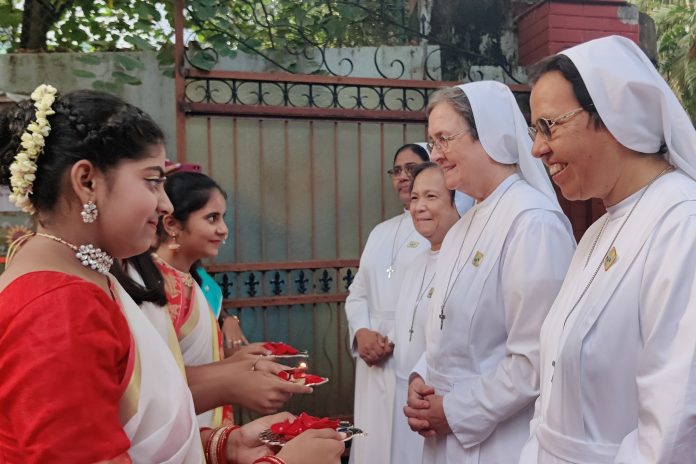 Bombay (India). On 27 August 2022, on the occasion of the 100th anniversary of the presence of the Daughters of Mary Help of Christians in India, an event prepared for a long time with various initiatives and events by the five Provinces of the PCI Conference, the Superior General of the FMA Institute, with the Councilor for  Youth Pastoral, Sr. Runita Borja, and the Councilor for the Missions, Sr. Ruth del Pilar Mora, arrived at the Bombay airport, seat of the Province of St. Mary Mazzarello (INB) for a short visit.

The Provincial, Sr. Meenakshi D’Silva, and some Provincial Councilors welcomed Mother and the Councilors and accompanied them to the Provincial House of Bombay Bandra where, despite the late hour, the whole community was waiting for them in celebration.

The visit began with a short Marian pilgrimage to the Shrine of Mount Mary in Bandra to ask for her blessing and accompaniment, and to visit the nearby Congregation of the Hospitallers, a sacred place for the FMA, since the first pioneers had stayed there. In the late afternoon, at the Auxilium of Pali Hill, Bombay, Mother and the Councilors lived the Eucharistic celebration presided over by the Bishop of the Archdiocese of Bombay, Msgr. John Rodrigues. In the introduction, symbols and words highlighted the 150 years of fruitfulness of the Institute, the 100 years of presence in India, and the 40 years of the Bombay Province.

In the evening, the illustrious guests were able to appreciate a cultural program with folkloristic dances from Gujarat, Rajasthan, Maharashtra, and the crowning dance of the woman. The Educating Community, the FMA from all over the Province, the students and the Past Pupils, the Salesian Cooperators and the benefactors were present with the gift of shawls, bouquets, and garlands of flowers. The evening ended with Mother’s words of the Goodnight.

On 28 August, Mother and the two Councilors were welcomed at the Mazzarello Youth Welfare Center in Wadala, in the AMAR Auditorium, with a presentation of the origins of the Province and with the welcome by the Animator of the Community, Sr. Ritha Dora Thomas. In her greeting, Mother Chiara, taking up Mary’s “I entrust them to you” of Mary Domenica Mazzarello, reminded all the FMA that the call is not only once, but continues by being generators of life, as were the pioneers.

In the Eucharistic Celebration, presided over by the Provincial of the Province of St. Francis Xavier (INB), Fr. Savio Silveira, the anniversaries of religious profession of two FMA were celebrated: the 50th anniversary of Sr. Marina Fernandes and the 60th anniversary of Sr. Annette Nelliyanil. A memorable moment of festivity followed for the Jubilarians in the presence of Mother and the General Councilors.

The day continued with the encounter with the Novices of Sacred Heart Novitiate of Nashik who, accustomed to seeing Mother through the media, were struck by her spontaneous and maternal presence. She asked them, “Are you happy? Are you happy?” And they replied, “Yes, dear Mother Chiara, we want to make sure that joy is significant in our journey as Novices and to become happy and committed FMA.”

It was then the turn of the Temporary Professed FMA, who greeted her with joyful song and dance. Mother Chiara made the encounter more familiar by giving them the opportunity to ask their questions and, recalling her experience as the new Superior General, she encouraged them to never feel alone and to work only for Jesus, to please Him alone.

Late in the evening, Mother and the Councilors reached the Goa region, welcomed at the airport by the Animators of the Goa and Karnataka Communities.

On 29 August, the FMA from the region of Goa and Karnataka gathered at St. Francis Xavier House in Benaulim and welcomed them warmly. Sr. Chiara Cazzuola began with these words, “It is one thing to see the maps, another thing to see the places; it is one thing to see the names on the pages of a book; it is quite another to see the face behind each name. Life changes when we meet people rather than communicate from afar.” Subsequently, the students of the different grades of the School performed with songs and dances. Also present were some Sisters of the Congregation of the Sisters of Mary Immaculate (SMI) and other members of the Salesian Family, who expressed their joy and gratitude to Mother for her presence among them.

Sr. Runita Borja then turned to the SF and the Educating Community saying that, as a Family, the mission is to work to uplift others, especially the poor and the young, and she left the acronym LIFT. L stands for “Listen”, to listen first, to be able to reach out to help. I stands for “Include” all without competition, without differences of caste, creed, color; every individual is important. F stands for “Find”, looking for solutions, no person, however educated, has the solution to all problems, all must participate. T for “Take Action”, transform and improve the situation by taking action.

The Eucharist was celebrated by Fr. Felix Fernandes, SDB, Provincial of the San José Vaz Province (INP), who in his homily spoke of the life of St. Mary Mazzarello comparing it to Abraham, father of faith, because she allowed God to lead her where He wanted, and urged all to imitate her virtues.

Before returning by plane to Bombay, the guests had the opportunity of a cultural visit to Goa, where the most significant place is Old Goa, where the relics of St. Francis Xavier are kept.

On 30 August, the day began with Holy Mass in the crypt of the sanctuary of Mary Help of Christians in Matunga Don Bosco, celebrated by Fr. Ashely Miranda, Vicar of the INB Province, and continued with a visit to the Auxilium School of Wadala, with more than 2000 students. The pupils of the Primary and Infant Schools and of the Secondary School performed songs in English, Marathi, and also in Italian. Mother then met the students and staff of the ASA (Auxilium Skills Academy).

The afternoon was dedicated to the cultural visit to Bombay. Sr. Philomena D’Souza, the guide of the pilgrimage, accompanied Mother and the Councilors to some of the most important historical places where the FMA pioneers passed: the Gateway of India, the famous international hotel Taj Mahal, the Sewri cemetery where the FMA are buried.

With the prayer of thanksgiving for the days of grace of her visit, the first visit of Mother Chiara Cazzuola to the INB Province ended, with the presence of all the FMA from the Bombay houses gathered in the provincial house of Bandra. In her turn, Mother thanked all the Sisters for the moments they lived together and for the fidelity of each Sister.

On 31 August 2022, Mother and the Councilors continued their journey to St. Thomas Apostle Province of Chennai (INM).