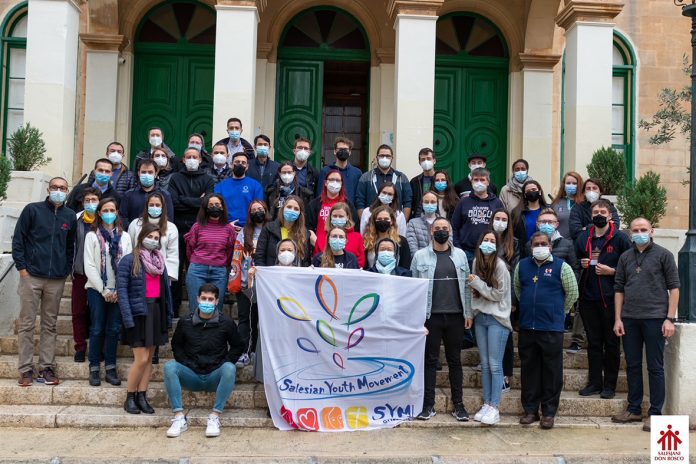 Sliema (Malta).  From 26 to28 November, on the Island of Malta at St. Patrick’s Oratory of the Salesians of Don Bosco of the Preprovince Mary Help of Christians (MLT) there took place the General Assembly of the Salesian Youth Movement (SYM) of Europe and the Middle East on the theme: Moving Beyond Ourselves. SYM Samaritans today.

The meeting was attended by about 50 young people from 13 countries of the Europe, led by the SYM Coordination team, “Small Team”, Salesians of Don Bosco and Daughters of Mary Help of Christians including Sr. Runita Borja, Councilor for Youth Ministry of the FMA Institute and Sr. Lolia Annie, collaborator of the Sector.

The objectives of the Assembly were: to resume and strengthen the bases of the SYM at local, national, and European level and to prepare the European Confront, the meeting of all the young people of the SYM groups which will take place from 11 to 16 August 2022 at Colle Don Bosco (Asti). During the Assembly, the official logo of Confront 2022 was chosen and the first steps in the organization were made.

Sr. Runita Borja accompanied the participants throughout the weekend, guiding reflection on the value of the Confront, on the history of the SYM, and on the theme of the Assembly. She presented some reflections starting from the Encyclical of Pope Francis Fratelli Tutti, linking them to the reality of the Salesian Youth Movement:

“The parable of the Good Samaritan speaks to us of an essential, often forgotten, aspect of our humanity: we were created for a fulfillment that can only be found in love. We cannot be indifferent to suffering, we cannot allow someone to spend their life as an outcast. Instead, we should feel challenged to come out of our comfortable isolation to allow ourselves to be changed by contact with suffering, which we must not be afraid of, because in taking care of others we somehow grow in humanity. Salesian Youth Spirituality is a spirituality of responsible service.”

Fr. García Morcuende Miguel Ángel, SDB, General Councilor for Youth Ministry, spoke via streaming to reflect on the guidelines of  SYM and project towards the future.

A significant moment of the Assembly was the Good Night of Sr. Ausilia De Siena, newly elected Councilor for Social Communication of the FMA Institute, who encouraged the young people of the SYM saying: “You are special young people because you are leaven for other young people, for the present and for the future of society, for a better world. Feel called by the Lord to this beautiful mission and never give up, even in the difficulties you encounter! We have a lot of faith in you! ”

Taking up again the Message for the 36th World Youth Day, “Get up now! to appoint you as a witness of what you have seen!” (cf. Acts 26:16). He desired them, in the words of Pope Francis, to open themselves to the surprises of God and to His voice, “In this way we will help one another to get up together again, and in this difficult historical moment, we will become prophets of new times, full of hope! ”

The participants lived days of meetings, of testimonies, of prayer, of celebration, a sign that the Salesian Youth Movement is alive and continues to be a point of reference for the young people of the world.