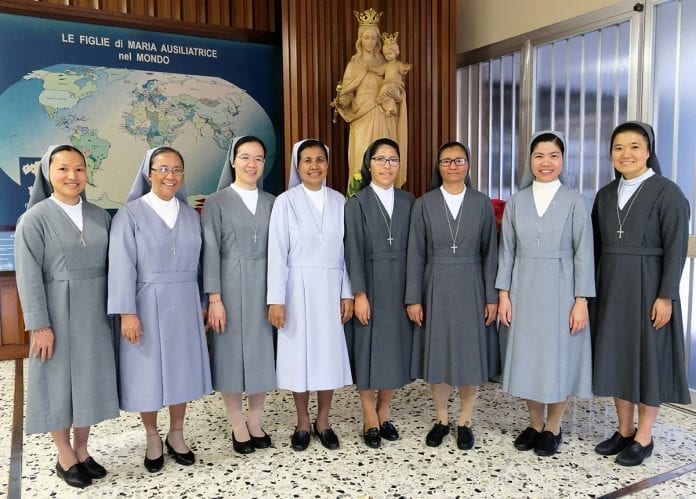 Rome (Italy). On the solemnity of Don Bosco, January 31, 2019, Mother Yvonne Reungoat, Superior General of the Daughters of Mary Help of Christians, communicated to the General House Community, the destination of the 8 new-missionary sisters.

The new-missionaries coming from 6 provinces and 2 continents, accompanied by the Councilor for the Missions, Sr. Alaíde Deretti, from January 22 to 31 lived the period of discernment in view of their destination that will be effective in July.

In her meeting with the community before announcing the destinations of the new-missionaries, Mother Yvonne said. “The feast of Don Bosco is a grace for each of us; being the monument of Gratitude to God renews our vocation and our missionary fervor.  We thank the Lord and Our Lady that the Institute may continue to be missionary.  We give praise for the gift of the new-missionaries who accept the Lord’s call to leave their own Country to bring the charism to other contexts and Nations.  Let us accompany them with prayer so that they may transmit God’s love to the littlest ones and to the poor”.

At the end of Mother’s Good Night, the Councilor reached all the Provinces to give the official communication.  In her letter, Sr. Alaíde, recalling the words of Pope Francis, writes: “We become a mission by inspiring ourselves from Mary, Mother of Evangelization. She, moved by the Spirit, welcomed the Word of life in the depths of her humble faith. May the Virgin help us to say our ‘yes’ in the urgency of making the Good News of Jesus resound in our time”.

The Councilor expressed her gratitude for the generous yes of each new-missionary and for the Provinces of origin, who had sent the sisters, even in their precarity and poverty so that the charism may be spread in other realities and reconfirm the educative-missionary identity of the Institute.

In fact, when Don Bosco founded the FMA Institute, he was motivated by a strong missionary impulse.  Never before as today, are the FMA invited to maintain the missionary fervor of the origins (6).

Following are the destinations of the new-missionaries:

The sending of these sisters is significant in 2019.  The Missions Sector is already preparing to live, together with all the FMA communities, Celebrations to ensure the missionary vitality not only of the Institute but of the whole Church.

During this year, there will be various recurrences to be lived with in an attitude of ‘outreach’:

With this missionary sending, every FMA is invited to renew her adhesion to the “Da mihi animas, cetera tolle” and the entrustment “I entrust them you to you”. It is the great opportunity to live as missionaries of hope and joy, as requested by General Chapter XXIII, with a broadened vision towards the world’s peripheries, where there are the neediest young people who await the miracle of life and a prospect for the future.

The Missions Sector wishes a fruitful Missionary Year to all the educating communities, so that it may be lived in hope, joy, and the gift of hearts and minds with a missionary imprint!

“Going out, like the disciples of Emmaus, further strengthened in faith and hope, we go with courage and joy to the marginalized youth, in need of the light of the Gospel”. (Acts GC XXIII, 62)

Living Monument of gratitude to Mary Help of Christians

Novena to Mary Help of Christians