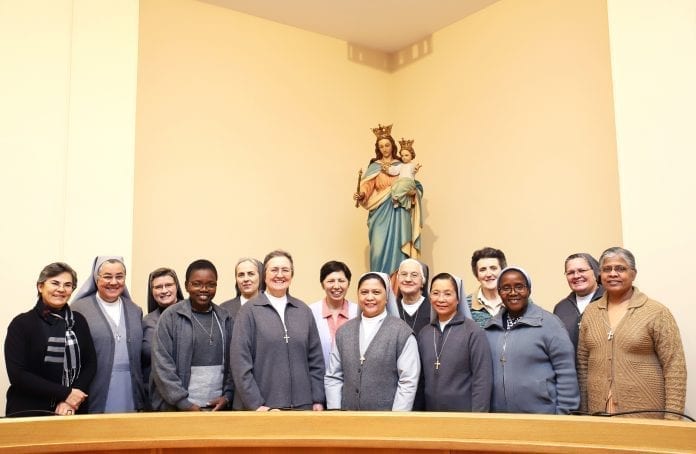 Rome (Italy) A commission convened by the Mother General of the Institute of the Daughters of Mary Help of Christians, Sister Yvonne Reungoat, and coordinated by the Vicar General, Sr. Chiara Cazzuola, is working to develop the Working Instrument of GC XXIV, from January 7 to January 31, 2020, at the FMA Generalate in Rome.

The Commission is International and is made up of 13 FMA, including 6 Provincials, coming from the various provincial realities of the different Continents:

At this time they are developing the Working Instrument for General Chapter XXIV, in constant dialogue with Mother and the General Council, starting from the precious contribution of the Provincial Chapters, the summary of the contents that emerged, prepared previously by the group of Collaborators of the Animation Sectors of the FMA Institute, and the results of the online survey “Communities that generate new life in the heart of contemporaneity.”

The elaboration of the Working Instrument is a very important phase in the immediate preparation for General Chapter XXIV, in fact it is a matter of approaching the ‘sacred ground’ of the FMA Institute with respect and attention, contemplating with amazement all the richness and charismatic vitality that the Educating Communities express in the Church and in the territory, with the challenges, weaknesses, and potentials, limitations and difficulties which must also be considered. It is certainly an exciting though demanding task.

The Commission will end its task on January 31, 2020, in the name of Don Bosco, to then return to their own Communities and Provinces.

The FMA Institute invokes the blessing of Mary Help of Christians on these sisters so that She who has done everything, will still be the Guide and the Inspirer as at Cana, Valdocco, and Mornese.

The XXIV General Chapter will begin in Rome, at the FMA Generalate, on 18 September 2020 and will end on 8 November 2020. The theme of GCXXIV is: “Do whatever he tells you” (Jn 2,5). Communities that generate life in the heart of contemporaneity.

The objective of GCXXIV is: to re-awaken the original freshness of the Institute’s vocational fruitfulness.

Sr. Chiara Cazzuola, Vicar General, was appointed as the Moderator, and assumes the responsibility of accompanying the preparation and development of GCXXIV.