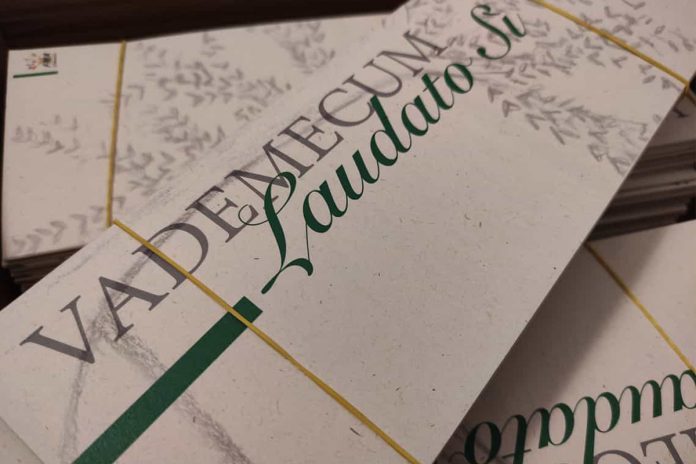 Milan (Italy). The Laudato Si’ Commission of the Lombard Province of the Holy Family (ILO), with the task of reflecting on the themes of Pope Francis’ Encyclical and of elaborating a plan of initiatives to help the Educating Communities of the Province to translate the journey into concrete steps of integral ecology, has elaborated a Vademecum Laudato Si‘ with the indication of small daily actions for a ‘sustainable’ lifestyle in line with Laudato Si’.

In fact, the Lombard Province allowed itself to be challenged by the resolution of the Assembly of the XXIV General Chapter to “involve the whole Institute in a more concrete and permanent path of conversion to integral ecology, taking up the 7 objectives of Laudato Si’, in the style of the preventive system” and by the exhortation of Pope Francis to commit oneself to the care of the Common Home.

The Commission then supported the reflection of the Educating Communities with proposals for moments of prayer, materials, and formative meetings, including that with Fr. Armando Cattaneo, a priest of the Diocese of Milan called by the Archbishop to ‘stay close’ to the realities that seek to actualize the Pope’s Encyclical that affirmed, “In Laudato Sì there is already everything; we do not need further study; we need action, we are already too late”.

Hence the idea of drafting a Vademecum of possible actions to offer to the Communities, so that each could decide the scope and concrete choices to be implemented, starting with some proposals by Fr. Armando that arise from the pop exhibit “Laudato Si’. Effervescent natural, which he conceived and was created by the artist Luigi Belicchi.

To put the tool into practice, the Commission then took a look at concrete choices made within and outside the provincial realities, overlapping them with the seven objectives of the “Laudato Sì Initiative Platform”.

The seven objectives have been classified into 4 groups, according to the indications received from the Youth Ministry Sector of the FMA Institute: General objectives (Response to the cry of the earth – Response to the cry of the poor); Goals for greater sustainability (Ecological economy – Sustainable lifestyle adoptions); Goals towards an ecological conversion and a cultural revolution (Ecological education – Ecological spirituality); Synodal process from below (Resilience and valuing the community).

With the conviction that the commitment to live what is proposed by the Vademecum LS is, is first of all a responsibility that the EC take on towards young people, to bequeath them a better common home, the graphic project was then assigned to Prof. Michele Casadio, who was able to involve the 1st C students of the 1st year secondary school of Mary Help of Christians Institute of Lecco. The final product was eventually printed on recycled paper.

The Vademecum wants to be a flexible, inspiring, useful, modifiable, expandable tool. It is therefore not a question of rules, but of concrete proposals for actions that can change everyone and the world. As Pope Francis says, “Furthermore, such actions can restore our sense of self-esteem; they can enable us to live more fully and to feel that life on earth is worthwhile” (LS 212).

On 15 October 15, 2022, the Vademecum Laudato Si ‘of the ILO Province was consigned to the Animators of the FMA Communities by the Provincial, Sr. Stefania Saccuman, who writes in the letter of presentation:

We too wish to commit ourselves, in our educational realities, convinced that, as Pope Francis affirms, “it is very noble to take on the task of taking care of creation with small daily actions and it is wonderful that education is able to motivate them to the point of giving shape to a lifestyle “(LS 211). Starting from small gestures, such as turning the light on or off, how to apologize, how to turn off the tap when the water does not need to flow. These are small things that give shape to a lifestyle that regenerates our life together.

We hope that from reflection and action the change in our educational realities will begin, so as to be able to offer “to those who will come after us, to the children who are growing up” concrete and achievable reasons for life and hope for a happy life.