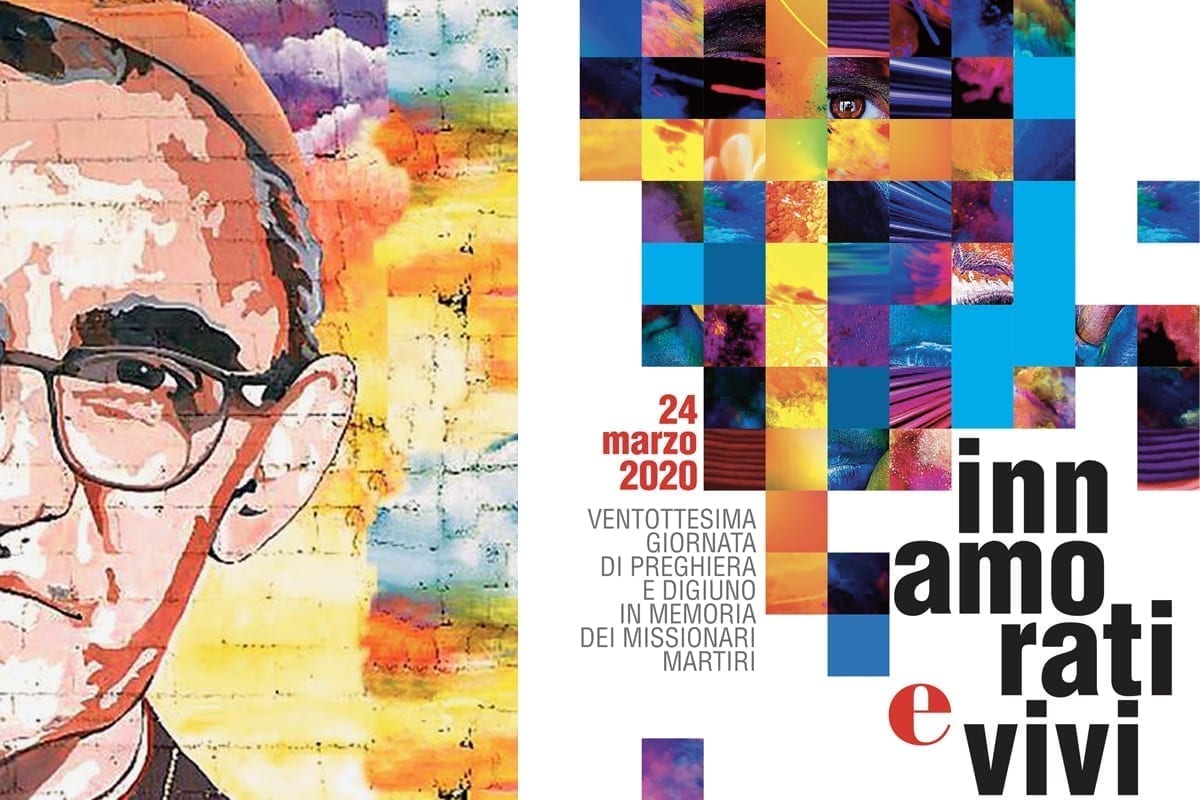 Rome (Italy) On March 24, 2020, the date on which 40 years ago, the Archbishop of San Salvador St. Oscar Arnulfo Romero was assassinated, the 28th Day of Prayer and Fasting is celebrated in memory of the missionary martyrs.

The theme chosen for this year, In Love and Alive, has a double meaning, explained by the Missio Foundation, the pastoral organism of the Italian Episcopal Conference (CEI) established in order to support and promote, also in collaboration with other entities and bodies, the missionary dimension of the Italian ecclesial community:

“The first, in the qualifying meaning, fully describes those who ardent in love for God the Father and His creatures have invested all their time to take care of them. Real gardeners of the Kingdom. Passionate about the world and those who live there. The second is a real imperative, the legacy that the martyrs have received from Our Lord by transmitting it to us today. Only those who fall in love are willing to abandon the superfluous in order to grasp the essence of life. This promise is not only hope for the future but above all a guarantee for the present.”

The Day of Prayer and Fasting in memory of the missionary martyrs has been celebrated since 1993, the year in which the Missionary Youth Movement – today Missio Giovani – proposed to the Italian Church to transform into an annual appointment this spontaneous celebration to remember all the martyrs killed for bringing the Good News.

During 2019, according to the data collected by the Agenzia Fides, information body of the Pontifical Mission Societies, 29 missionaries were killed worldwide: 18 priests, 1 permanent deacon, 2 religious, 2 sisters, and 6 lay people. Among these, two Salesians of Don Bosco: Father Antonio César Fernández Fernández and Father Fernando Fernández, both killed in Burkina Faso three months apart. The highest number of martyrs, as in 2018, belongs to the African continent.

Remembering martyrs killed in odium fidei does not simply mean commemorating them in their sacrifice, but transmitting the spiritual heritage of so many witnesses of the faith who find fulfillment in a life following Christ. A testimony that becomes, as Pope Francis underlined in the Angelus of 26 December 2019, the feast of Saint Stephen, “a source of inspiration for the renewal of our Christian communities, called to become increasingly missionary.”

This time of particular emergency due to the Coronavirus, has forced the Bishops to suspend any celebration or gathering, thus the Day in 2020 will not have any public initiatives.

Giovanni Rocca, National Secretary of Missio Giovani, in the letter of introduction to the Day, invites us to remain united in prayer, “Convinced that each of us is a worker in the vineyard of the Lord, on March 24 we join in prayer and fasting in memory of the sisters and brothers who gave their lives and continue to be In Love and Alive.”

On the Web Site of Missioitalia various resources are available to explore the theme of the day and proposals for concrete initiatives of prayer and solidarity.

Celebrating with Mary Help of Christians

World Day of Prayer for Vocations

Day of Solidarity and Prayer