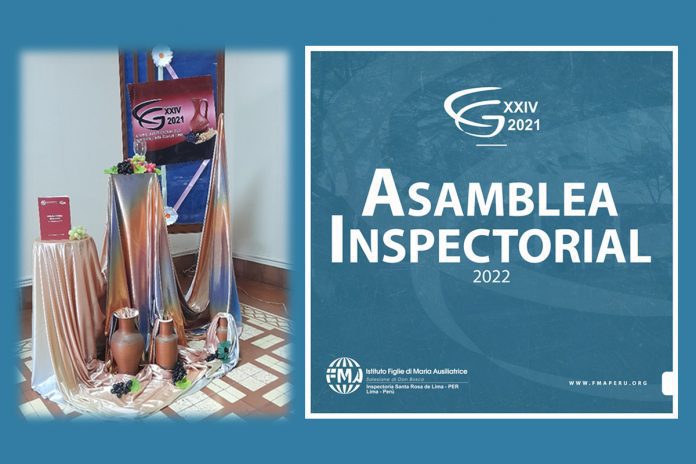 Lima (Peru). From 17 to 21 January 2022, in online mode, the Provincial, Sr. Elsy Núñez, and the Delegate, Sr. Rosa Mollo, shared the experience of the 24th General Chapter with the Daughters of Mary Help of Christians and the laity of the Educating Communities of Province of St. Rosa of Lima (PER).

A few days earlier, on January 13, the first monthly commemoration of Mother Mazzarello on the 150th anniversary of the foundation of the Institute, an online provincial meeting had taken place with the consignment of the Acts of the Chapter, in which all the FMA of the Province and some lay representatives of the various groups: young people, educators, parents, and members of the Salesian Family participated.

Each community was asked to set up the “Chapter Corner”, to celebrate the consignment of the Acts of the Chapter. After invoking the Holy Spirit and seeing a video on the passage from the Wedding at Cana, everyone was invited to bring a glass of water, the water of their own existence and the contribution of each one, to the “the Chapter Corner”, which would become wine.” The Animators then distributed the Document to each Community so that everyone could prepare themselves personally.

160 participants, including FMA and lay people, were connected online to the Provincial Assembly, which took place from 17 to 21 January, to welcome, learn about, reflect on the Chapter experience, starting from which to elaborate the Provincial Plan.

In the first three days, Sr. Rosa and Sr. Elsy alternated respectively in the presentation of the introductory part of the Document: Presence that listens, walks together, outgoing and online community, and on the priority choices: Formation, Missionary Synodality, Integral Ecology. The different moments were followed by sharing in small groups through the platform. On the 4th day, the Chapter Deliberation was presented.

The last day was dedicated to synthesizing the resonances and outlining the objectives, taking into account the priority choices of the FMA Institute and the provincial realities.

The Assembly ended with a moment of prayer, during which the participants tasted the wine: the water left at the beginning at the “Chapter Corner” was transformed into good wine, into the new wine that every Educating Community of Peru wants to be.

The Chapter’s online transmission meetings took place in the mornings, while in the afternoon a team composed of the two Chapter members met with Oscar Becerra, who for several months has been leading the preparation of the Provincial Plan by the “Wedding at Cana” Team, constituted to guide the drafting of the new Plan, and by a group of FMA ‘facilitators’, with the task of guiding the group work during the chapter transmission and carrying out the synthesis work in the afternoon.

It was an intense, fraternal, serene week, in which the participants let themselves be led and enlightened by the chapter narrative. As Mother Chiara Cazzuola writes in the presentation of the Acts:

“The XXIV General Chapter is not over, now it continues in the history of each FMA, of all the Educating Communities, in the places where we share life and mission together with the young people and the laity. It will truly be realized and bear fruit if we are docile to listening to God, to his Word, to reality, to people, ready to do ‘All that He will tell us.’ Only in this way will Jesus be able to continue transforming the water of our existence into new and good wine, giving us courage to be people and communities that generate life, to face the challenges we will encounter, and to implement the choices we have indicated”.

Online Meeting of the FMA in southern Brazil