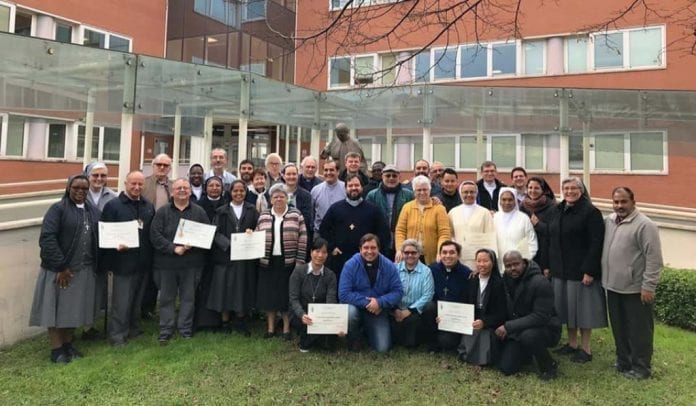 Rome (Italy) – On December 5, 2019, the XXIII Course of Ongoing Formation in Missionary Pastoral concluded, held at the Pontifical Salesian University (UPS) in Rome, from September 30th  to December 5th 2019.

Beginning with the study of the sources of the Salesian charism at Valdocco and Mornese, the Course saw the participation for a period of three months of 34 missionaries – 13 Daughters of Mary Help of Christians (of whom 3 are new missionaries), 2 Franciscan nuns, and 19 Salesians of Don Bosco – from India, Congo, Cambodia, Argentina, Syria, United Kingdom, Italy, Spain, Philippines, and Brazil.

The day before the beginning of the course – September 29, 2019 – some of the participants, during the Eucharistic Celebration of the 150th Missionary Expedition in the Basilica of Mary Help of Christians in Turin, received the Missionary Cross from the Rector Major of the Salesians, Fr Ángel Fernández Artime, in the presence of the Mother General of the Daughters of Mary Help of Christians, Mother Yvonne Reungoat, and of Sister Alaíde Deretti, Councilor for the Missions.

The lessons aimed at highlighting the theological foundations, the contexts, the ways, and the practices of the missions, had the objective of making the challenges facing the mission of the Church today grasped from various perspectives: Mission and care of the common home, Mission and ecumenism, Mission and information, Globalization and mission, Communication and evangelization, Mission and education, Family and mission, Missionary sanctity, Catechesis in the evangelizing process of the Church, … were some of the themes addressed. Furthermore, the opening of the Course to more Congregations and the sharing of personal missionary experiences enriched the formation path, highlighting the ecclesial sense of the experience.

One of the religious participating in the course, Sister Liliane Kaputo, FMA, underlined that it was not only a time of reflection and study on missionary, theological, pastoral, and ecclesial themes, but of “an experience of spirituality with the Spiritual Exercises at the Fraternal Domus of Sacrofano which spontaneously invited us to prayer and depth.”  In fact, in addition to the 200 hours of formation with the intervention of experts on different contents concerning the missionary commitment, the participants were able to experience significant moments directly in the places where some great spiritual figures were born and lived. Assisi and Siena, the city of origin of St. Francis and St. Catherine; Subiaco, where St. Benedict of Norcia spent a period of eremitical life; and Rome, were the goals of pilgrimages. “The pilgrimages not only motivated us, but also invited us to enter into communion with these great saints of the Church. Visiting the Catacombs of San Callisto, walking in the footsteps of St. Paul, and seeing the excavations up close of the Tomb of St. Peter in the Vatican, allowed us to enter into harmony with a Church of martyrs, a minority Church, an outgoing Church.”

For a group of participants, the journey culminates in the footsteps of Jesus in the Holy Land, from 7 to 14 December 2019, a destination of pilgrimage par excellence.  We could not miss attending the Wednesday Audience – November 13, 2019 – in St. Peter’s Square: “We could see him up close, feeling in deep communion with him, and sent as missionaries.”

Sister Liliane Kaputo at the end of the course states: “There are still many challenges, but we are sure that after this time of formation, reflection, and prayer, we can start with more enthusiasm and trust in God. We are all mission.”

With Mary, Woman of Faith

Do whatever he tells you