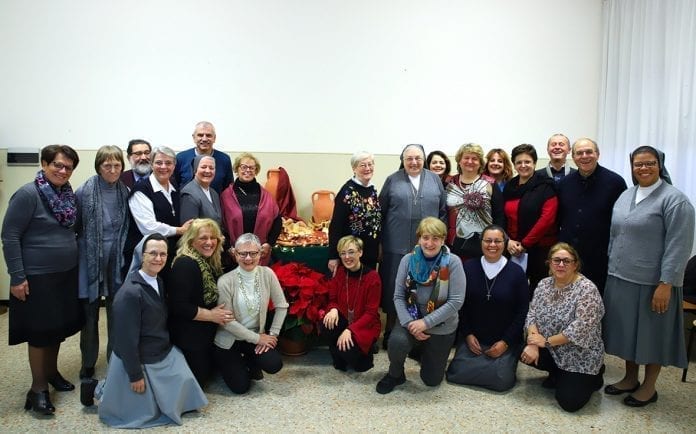 Rome (Italy). On December 13, 2019, at the Generalate of the Daughters of Mary Help of Christians in Rome, representatives of the Groups of the Salesian Family gathered together with Mother General, Sister Yvonne Reungoat, to exchange Christmas greetings.

The World Confederation of Past Pupils represented by the President Mrs. Maria Maghini and some Councilors; some members of the Council of the NGO ‘Non Uno di Meno’; the Director of Unione Magazine, Mrs. Concetta Apolito; Mr. Antonio Boccia, World Coordinator of Salesian Cooperators with some members of the World Secretariat; Mrs. Marina Pompilli and Mr. Fabio Marzola, representing VIDES International, expressed their gratitude to Mother for her encouragement and attention to the different Groups of the Salesian Family.

Present at the meeting were the World Councilor for the Salesian Family, Sr. Maria Luisa Miranda; the Animator of the Generalate, Sr. Bernarda Santamaria; the Delegate of VIDES International, Sr. Audate Annecie; the Delegate of the Past Pupils, Sr. Gabriela Patiño; and the Salesian Cooperators Delegate Sr. Leslye Sàndigo.

The nativity scene set up in Romero Room and the moment of prayer had as the theme the passage of the Wedding at Cana, in which Jesus is the good wine for humanity.

Mother General urged those present to listen to Mary’s invitation: “Do whatever He tells you” and let yourself be transformed by Christ, like water changed into wine.

She recalled the particular historical importance of this moment, in which the Institute of the Daughters of Mary Help of Christians is preparing to live the XXIV General Chapter and to celebrate 150 years of life. An anniversary that, in the uncertainty and crisis of values ​​of the present, is a call to the past, to the rediscovery of its charismatic identity and also a challenge for the future, lived with and for the young, the hope of the Church and of the world.

“Young for the Young”