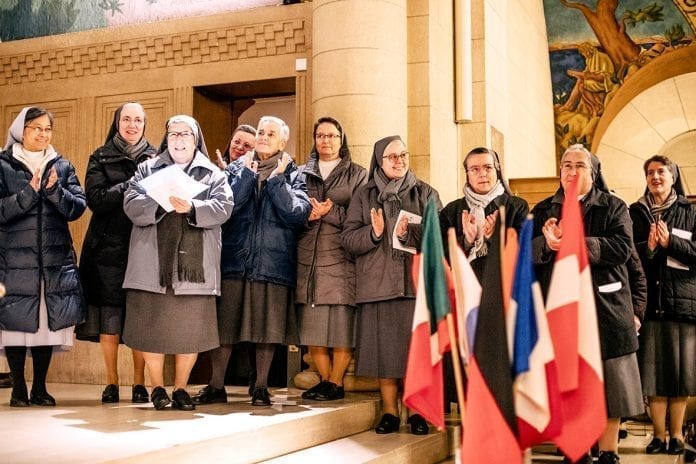 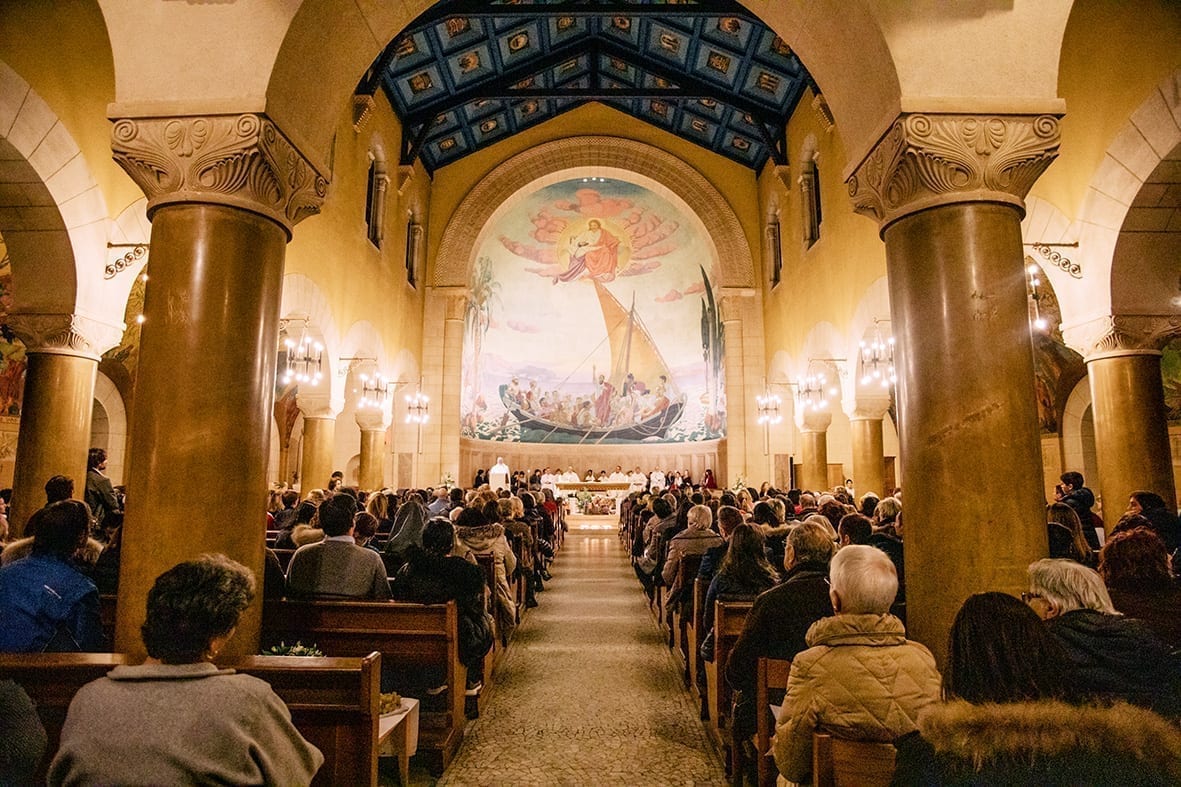 The Eucharistic Celebration in the Church of Saint Paul in Geneva, presided over by the Bishop of Lausanne, Geneva, and Friborg, Monsignor Charles Morerod, Bishop Emeritus Monsignor Pierre Farine, and some concelebrating priests, animated by the students of the La Salésienne Nursery School, and with the participation of many parents and supporters of the work concluded the year of celebrations.

Before the beginning of the celebration, the Provincial, Sr. Maria Teresa Cocco, welcomed those present, expressing her gratitude to the civil authorities, the Bishop and the concelebrants, to the Committee of La Salésienne, and to the entire Educating Community. Her words then accompanied the gesture made by a child who placed a vase containing the soil of Geneva at the foot of the altar:  “Thank you for the ‘Yes’ of our first missionaries who arrived here in 1919, leaving their Countries to take care of the children of Italian immigrants in Geneva. Sister Luisa, Sister Jeanne, Sister Marie, and Sister Ida transmitted the Salesian charism by living the family spirit in everyday life, so dear to Don Bosco, making their house a home that welcomes, educates, and evangelizes. In a hundred years of educational presence in Geneva, thousands of hearts and minds have opened up to better serve God and their brothers and sisters in the contemporary world, and to be elements of peace, solidarity, fraternity, and justice in society”.

The Mother General of the FMA, Sr. Yvonne Reungoat, made herself present with a message sent to the Animator, Sister Lucia Corbetta, and to the Community, encouraging them to continue their mission in a renewed journey of holiness:  “I address the wish that in full synergy with those who take care of the human and Christian growth of young people, especially those in situations of poverty or hardship, can write a new, wonderful page of history, a page of the living Gospel reflected in your community. May yours be a presence that generates life and radiates hope, so that the children and young people to whom you offer educational, formation, and volunteering opportunities, and any other person who shares your mission, can look to the future with confidence and that the young people themselves may become responsible builders for a new humanity. (…) I entrust your present and your future to Mary Help of Christians, so that the community may continue to be fertile ground for the educational mission and for the proclamation of the Gospel of Jesus in this time of interesting and unprecedented possibilities. You are given a precious heritage of 100 years of history. I am sure that your heart is open to welcome it, develop it, and honor it with your life witness”.

The centenary year opened on 31 January 2019, on the Solemnity of Don Bosco with the Eucharistic Celebration with the entire Educating Community. In April 2019, there was a concert open to all on the theme of gratitude by the well-known Belgian singer-composer Théo Mertens, in which even the pupils of the last year sang and made small videos, later presented throughout the school. To deepen the Salesian charism, on September 14, 2019, two buses of families from the school went on pilgrimage to Colle Don Bosco in Morialdo, a hamlet of Castelnuovo Don Bosco, a town in the province of Asti (AT), the place where St. John Bosco was born. All the initiatives were carried out thanks to the collaboration of the laity and the Committee of La Salésienne. 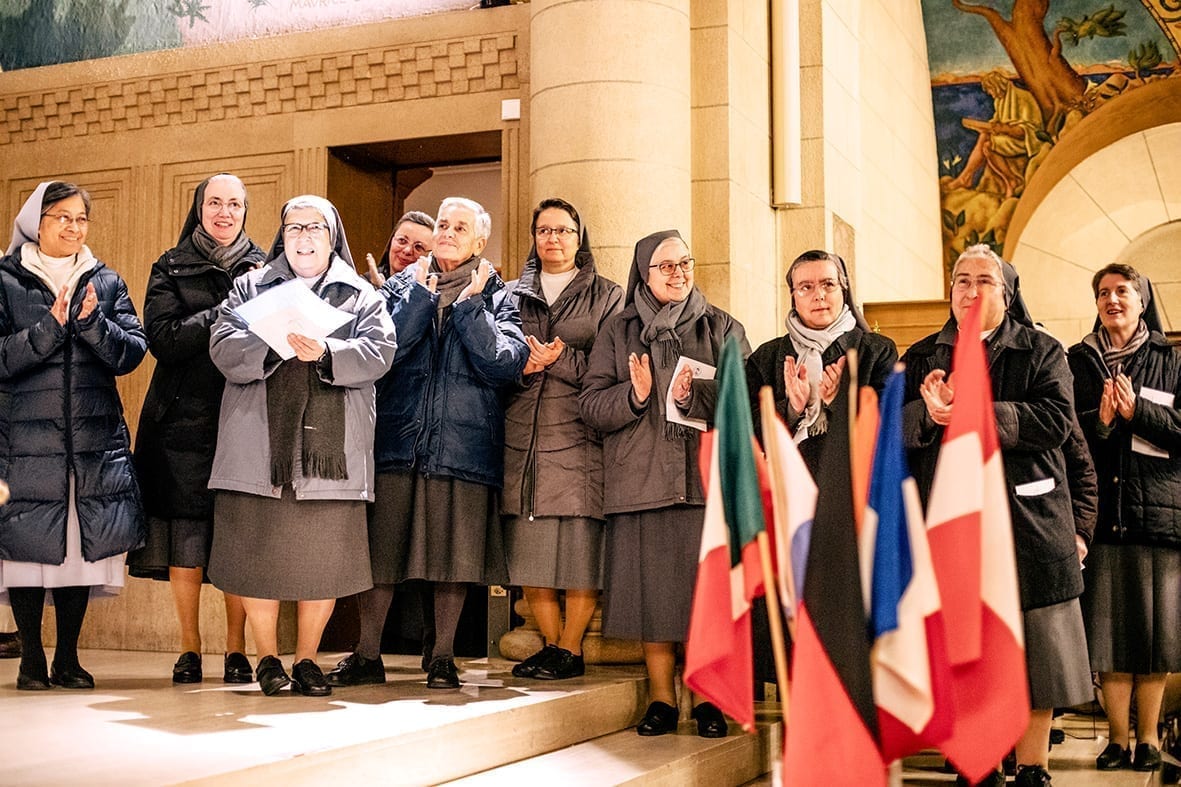 The sisters from Turin were sent by the Superior General, Mother Catherine Daghero. At that time, the mission was part of the French Sacred Heart Province. The chronicle of that year reports that the Sisters had to wait at the border of 12 hours due to the passports and arrived in Geneva cold and hungry.

The following day, Miss Goria prepared the activities they were to carry out: looking after the Italian children and emigrants, catechism in the parish, the oratory – a typically Salesian work in which the whole community was engaged, conferences for the women.

Meanwhile the house, due to the greater numbers of children became too small. It was necessary to move to Rue de la Servette in Geneva. The children were constantly increasing.

It is the sad period of the war. Switzerland, a neutral country, is surrounded. At the train station an office is created specifically to deliver mail to Countries at war. The sisters also have the task of getting the mail to the post office and having it arrive to the Superiors in Turin so they could give news to distant family members.

In 1945, the house where they are living is put up for sale. They had three months to look for another house and they find accommodation at No. 48 Rte de Meyrin. The house needs to be made habitable, but fortunately a neighbor rents two rooms that serve as classrooms. In this period they receive the visit of the Superior Fr. Pietro Berruti who sees their difficulties and encourages them to continue to carry out the educational mission among the Geneva youth.

On January 4, 1951, the Sisters arrive in Veyrier with some residents, to settle there. The house is very poor, everything is missing, but they can accommodate a larger number of children. The number of students increases rapidly: the majority are from immigrant families, sometimes without rights, single-parent families or divorce petitioners who need to place their children safely in a boarding school. The decision is made to build a prefabricated school and leave the house for the residents.

In 1966 the new school opened its doors in the presence of civil and religious authorities and took the name ‘La Salésienne’.

From this moment, the number of students increases rapidly. The FMA meet many difficult situations of hardship and material and moral poverty. During the summer they welcome young people who wish to learn French.

In 1991 the gym was built, suited to the needs of the pedagogy of the time. A large party organized by a promotion committee and the gift of an Italian benefactor’s villa cover a large part of the cost.

In 2011, the ROLEX Foundation, Hans Wilsdorf, makes a large contribution to the construction of a big, bright, and spacious Primary School. In 2017 there is a Nursery School with a new dining room and modern kitchen. The Hans Wilsdorf Foundation still bears a large part of the expenditure.

Today the students who are preparing to be “good people of faith and honest citizens” are about 400, of all social strata and of different origins and religions.