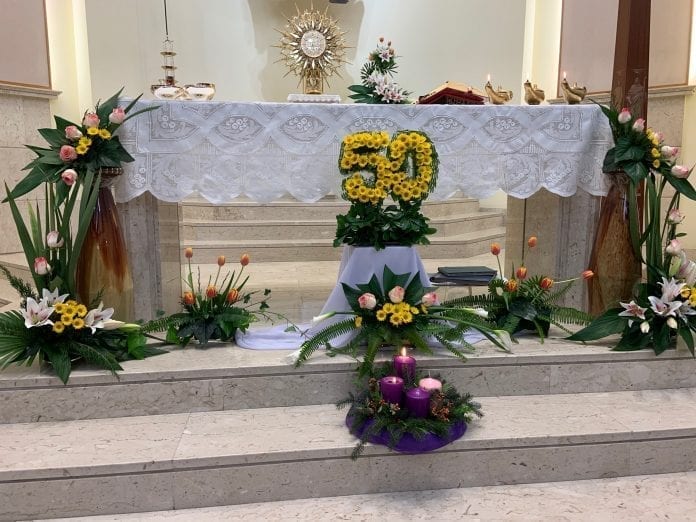 The celebrations for the 50th anniversary of the Generalate of the Daughters of Mary Help of Christians were opened on 11 October 2019, with the Eucharistic Celebration presided by the Salesian Bishop Msgr. Enrico Dal Covolo, and continued on 7 and 8 December 2019.

The First Vespers of the Solemnity of Mary Immaculate, presided over by Fr. Cristiano Ciferri, SDB introduced the commemorative moment recalling Mary’s ‘Yes’ and her spiritual beauty.

“It was she who did everything” (Don Bosco) was the slogan chosen. And to Mary everyone returned to celebrate this important anniversary:  the sisters of the Generalate Community, Mother General Sr. Yvonne Reungoat and the General Councilors, the FMA, the Sisters of the Communities of the Preprovince of Mary Mother of the Church (RMC), the Provincial, Sr. Angela Maria Maccioni, and the neighboring communities of the Province of St. John Bosco (IRO), the Novitiates of Via Appia (Rome) and Castelgandolfo, the Collaborators with their families, and the Benefactors of the Salesian Family and entrusted the stories, life experiences, projects, hopes of the Superiors and Sisters, past and present, of all parts of the world, a sign and prophecy of communion.

“This house has no vocation, it is a vocation; it has no mission, it is a mission, that of entering into dialogue with the Daughters of Mary Help of Christians, with the Institute, with the Collaborators, with the Church. It is a house at the service of the mission and every FMA here is “the servant of the Lord”. Here the intercultural experience of the Salesian charism is made”.

These are the words of the homily of Fr. Francesco Cereda, Vicar of the Rector Major, Fr Ángel Fernández Artime who, on 8 December 2019, presided at the Solemnity of Mary Immaculate, the Eucharist for the 50 years of Foundation of the FMA Generalate, recalling that the most important things for Don Bosco began with the Immaculate Conception, the “all beautiful”, proposed by the Saint to young people to speak to them about beauty after the proclamation of the Dogma in 1854.

The celebration, animated by the FMA of the Generalate, ended with the Magnificat of thanksgiving, accompanied by a dance. Then in the entrance hall, the traditional Marian circle was held to commemorate, together with the whole Salesian Family and the Educating Communities of the world, the birth of the Oratory (8 December 1841) with the Hail Mary recited by Don Bosco together with Bartolomeo Garelli.

An exhibit  set up for the occasion, recalled through the main historical stages and the succession of Mothers  General and Councils, the important events that marked the life of the more than 550 Daughters of Mary Help of Christians who lived in this House.

In the afternoon, the time of celebration in the Auditorium of the Generalate was introduced by the Animator, Sr. Bernarda Santamaria who, after the words of gratitude, said: “Here are so many Daughters of Mary Help of Christians, from all countries and continents. They form a multi-colored fabric of cultures, languages, traditions. In the simplicity of everyday life, they offer their commitment to study, work, and serve the Institute. And what makes life beautiful here is the joy that never fails, despite the toils and the inevitable difficulties. Together we help to ‘color’ with creativity the design of love that Our Lady gave to Maìn: I entrust them to you”.

A short time of commemoration followed to recall the experience of the Community of the Generalate in the 50 years of its life and mission, an international community, life-giving, synodal at the service of the Institute.   It was a joyful and multicultural thank you, of dances with the typical clothes of different countries of the world, videos with historical photos and moments of fraternity lived, a song His Home. Memory becomes concrete life in a community that lives in the heart of contemporaneity with the attitude of Mary, to live the generative force of the Salesian charism, sustained by the joyful and unshakable certainty that the Holy Spirit pours out and infuses into the daily life of the Generalate a new vitality and creativity, full of the hope of the new wine that springs from faith. 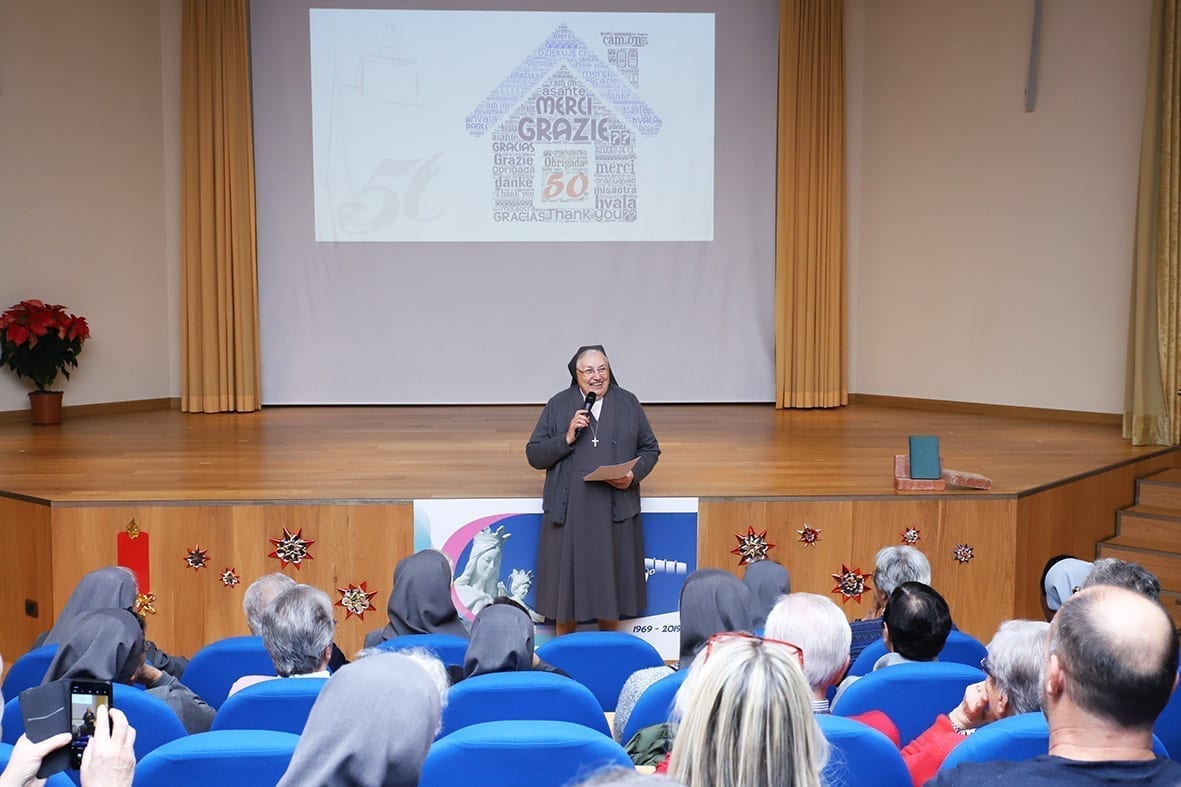 “This is the home of every FMA, of each and every young person, of the lay people who collaborate in different roles, and of everyone who enters”. With these words, Mother Yvonne Reungoat introduced her talk. “Not only are each of us part of this House, but each is home. Here you cannot have a small heart, because the heart is always called to be a home that welcomes the world”.

She then briefly traced the main stages of the history of the Generalate, which is the third Mother House after Mornese and Nizza Monferrato.

It was born as a house on the periphery, just as Pope Francis asks today, “an experience that wants to be an invitation to live hospitality all over the world,” a place where knowing how to do, how to be home, among ourselves and for who those who come”.

She ended by saying: “I think our prayer today is an action of thanks to the Lord. So much life took place here, that from here radiated into the world. We do not know what the many people who have passed through here, who live here, who come and go from this house, which is a center of world radiation, have experienced in their hearts. But we are sure that the Lord always gives birth to new life, He multiplies it starting from an experience of fraternal sharing lived out of love, in acceptance. Our Lady continues to walk in this house, in all the houses of the Institute, and in the homes of those present, to cover them with her mantle so that they may be faithful to the dream that the Lord put in the heart of Don Bosco and Mother Mazzarello, to the mandate “I entrust them to you.”  Our Lady always entrusts us with someone to make happy”.

25th of the mission of Abidjan (Ivory Coast)