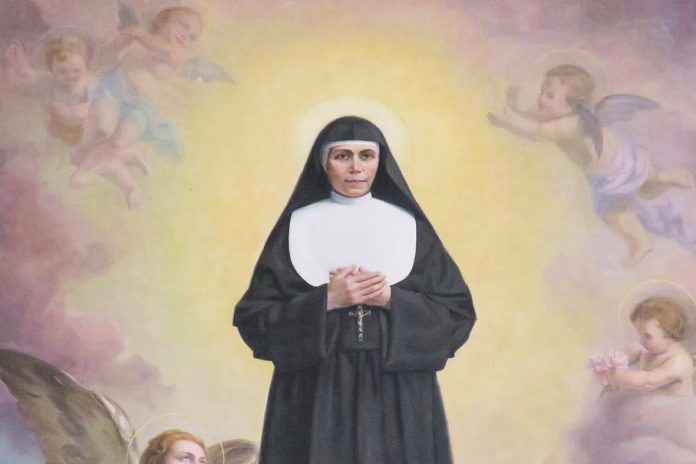 Rome (Italy). On 13 May 2022, the Salesian Family celebrates the Solemnity of Saint Mary Domenica Mazzarello, Co-founder of the Institute of the Daughters of Mary Help of Christians. In the Triduum in preparation for the Feast, “a large and generous heart” in the 150th anniversary of the foundation of the Institute (1872-2022), Sr. Eliane Petri particularly emphasized the aspects of generativity and maternal and educational ‘presence’.

Taking up the Acts of Chapter XXIV, on the presence that takes care, one can also recognize in her the traits of a woman who, like Mary, expresses her feminine identity in the active concern for her sisters and young people both on earth and from Heaven (Cf. no.4). Like Mary, she is a concrete woman who listens deeply, welcomes the cry of those who suffer (n. 6) and provides (n.7). Like Mary, she is a helping presence both in life and in death (n. 20).

The General Secretariat of the Institute of the Daughters of Mary Help of Christians offers some episodes taken from the life of the FMA on the way to Holiness, which present Mary Domenica Mazzarello as a mother who cares, listens deeply to needs, and is also a helper from Heaven.

Here is an episode concerning the Servant of God Sister Antonietta Bohm when she was in Argentina, her first missionary destination:

“One evening, Sr. Antonietta, while she was closing the door of the house, saw a sister standing next to the water tank in the courtyard covered by half a meter of snow. She immediately sent two young men to call her, but they realized that the sister was not touching the ground. They knelt down and said, “Oh, Mother!” The same impression of something that seemed beyond reality then struck Sr. Antonietta as well, who was standing in the doorway.

The Sister she had sent the men to call to come into the house, was not just any Sister. She was one who could not suffer the cold of the night; she was (all three were convinced) their Co-founder. … Yes, really, it was she who was at home in the Junìn community. The sisters loved her and trusted in her protection.

In her brief ‘memoirs’ of Argentine missionary life, Sr. Antonietta herself writes, “I was struck by the great devotion my sisters felt for our Co-founder. She helped them in a tangible way and this was almost natural to them. Another time, when the sisters had finished their scarce provisions, none of those who should have replenished them are seen. Days pass and the ghost of hunger begins to appear, even for the intern students.

At one point, two people were interested: Mother Mazzarello and a real friend named Manuelito. Manuelito set up some wagons with their horses and drivers. On their return, halfway to a community called Catanlill, during a rest stop, these drivers happily gave themselves to wine, forgetting the urgency of their mission. Suddenly, they saw a sister appear beside them, accompanied by a girl. The sister called them to order and they were struck by the peremptory nature of her words. In a hurry, without even drinking the last glass, they hitched up the horses and off they went. Then, in Junín, Mr. Manuelito saw an image of Mother Mazzarello in the porter’s lodge. “This is the sister who scolded us”, he observed.  “Who is she?” “She is our co-founder, but she has been dead for at least sixty years”. The good Manuelito’s hair suddenly turned white. “(COLLINO M, Sr. Antonietta Böhm, Editors Velar Bergamo 2013, 28-29).

“On the night of 12 August 1926, Sr. Laura had a severe asthma crisis. She faithfully invoked the Co-founder Mary Domenica Mazzarello, because she felt faint and she had no voice to call someone. She then heard repeated knocks on the front door, but with regret she realized that no one had woken up. With a candlestick she had on her nightstand, she began banging against the wall.

Finally, Sr. Maria Mazzoli woke up. Sr. Maria, while she was about to go down the stairs, saw a reddish light from the glass window of the chapel. She screamed for help, the sisters ran and began to throw water, trying to put out the fire. The chapel was ruined, the rest saved, including the people. Sr. Laura, as soon as they began to put out the fire, “got up healthy and well” and the knocking ceased when Sr. Mazzoli woke up. Despite the investigations made, no one ever managed to find out who had persistently knocked on the door. All were convinced of an intervention by Mother Mazzarello” (Positio super virtutibus of Mother Laura Meozzi).

Festivities for the 150th at Mornese