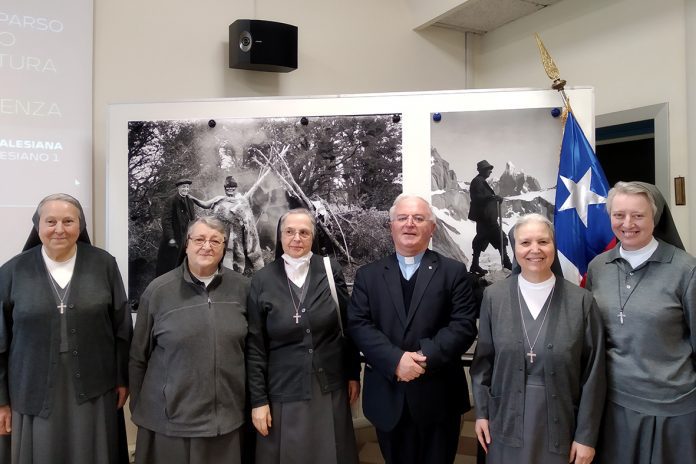 Rome (Italy). From 25 to 27 April 2022, at the Salesian Pontifical University (UPS) in Rome, the International Study Conference on “Don Alberto Maria De Agostini (1883-1960) was held. Man, nature, art, science,” promoted by the Salesian Historical Institute, by the Congregation of the Salesians of Don Bosco, and by the Faculty of Social Communication Sciences of the UPS.

Along with numerous scholars, a group of Daughters of Mary Help of Christians also participated, interested in the topic, recalling that since 1880, Mother Angela Vallese and the first missionaries arrived in Patagonia, the land of Don Bosco’s dreams. Still today, they continue to love the land Darwin called ‘cursed land’, but for Salesian educators, is ‘blessed land’.

As his great-grandson Dr. Giovanni De Agostini said, Fr. Alberto had not only red and white globules in his blood, but a passion for climbing! From an early age, he cultivated this passion, thanks also to the stimulating family context; his brother Giovanni, 20 years older than him, is the well-known publisher De Agostini of Novara, famous for the publications of atlases and cartographies.

Fr. Alberto, fascinated by Don Bosco’s dreams of Patagonia, became a Salesian and a missionary in 1909. He arrived in Punta Arenas in 1910. A multifaceted, but silent and shy man, with a strong charge of pioneering adventure, he spent 50 years in the South of South America, at the ‘end of the world’, not only educating young people and dedicating himself to evangelization, but climbing mountains and dedicating himself to mapping southern Patagonia. He was therefore, as he was defined: Climber of souls and mountains. Ancient and modern man, a link between Piedmont (he was born in Pollone-Biella in 1883) and Tierra del Fuego.

The Salesian missionary, in collaboration with expert mountaineering guides, dedicated a large part of his life to exploring the Magellan lands by photographing them, filming them, divulging knowledge of unknown places and native peoples, from the Darwin mountain range to the Balmaceda and Paine groups, mountains that enchanted him for their beauty and majesty. This is what he wrote while contemplating Mount Sarmiento, “The place is one of the wildest and most grandiose. Forests, lakes, rivers, waterfalls, form the pedestal of this fantastic turreted castle, with gigantic walls, armored with glaciers, surmounted by terrifying spires that offer so much seduction to the audacity of mountaineers … “.

One of the most complex tasks of the mission in Patagonia, which Fr. De Agostini undertook together with other famous Salesians, such as Bishop Giuseppe Fagnano, was to protect the indigenous communities of the region, the especially Onas and Alacalufes enslaved by European landowners. The FMA and SDB missionaries sought to know them, protect them, and understand the richness of their culture.

As Dr. Nicola Bottiglieri outlined at the end of the Conference, Fr. De Agostini inaugurates the “culture of the gaze” that makes him current and modern. His is a contemplative gaze that knows how to see places and people in depth, discovering the signs of the Creator, the charm of Infinity, a romantic gaze always in search of beauty, even when it is beautiful-horrid; the dreamlike gaze of Don Bosco who dreams of horizons that extend beyond all imagination; the gaze of the missionary who knows how to understand reality, welcomes it, promotes it, and prepares a new future.

In these days, thanks to the various expert reports, our gaze has also become brighter, more penetrating, more open and grateful to God who fills his daughters and sons with gifts and never ceases to fascinate us with His beauty, always surprising and yet all to be discovered.

It is the time of “Missio ad gentes”