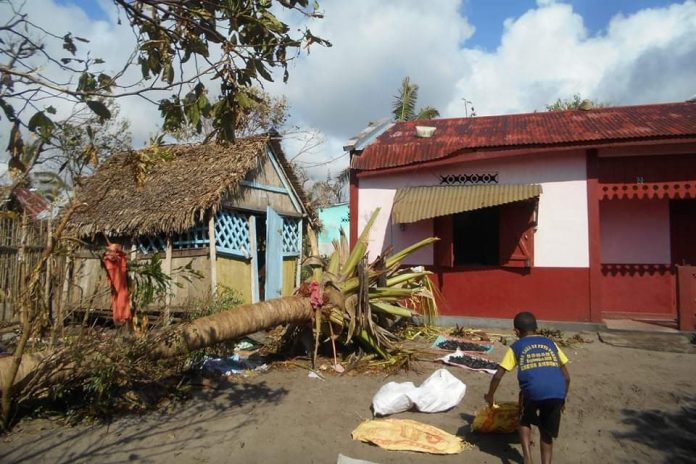 Madagascar. In the night between 5 and 6 February 2022, Typhoon Batsirai hit the south-eastern coast of Madagascar with winds of up to 165 km per hour, devastating everything in its path.

Two days before it reached the island, the population had been alerted by the National Bureau of Risk and Disaster Management (BNGRC) of the intensity of this Typhoon, predicted with a greater power than others that had already hit Madagascar. The people living on the east coast had prepared by reinforcing the roofs of the houses with sandbags and moving to safer places, but the gusts of wind, the big waves, and the heavy rains left nothing intact. Even the roofs of the shelters were blown away with unprecedented fury and the displaced people doubly affected.

The regions of Vatovavy, Fitovinany, Matsiatra Ambony, and Amoron’i Mania suffered extensive damage: houses destroyed, roofs of structures uncovered, roads cut off, fallen bridges, rice fields and several hectares of crops completely flooded. According to estimates, there are over 100 victims and around 30,000 displaced.

Blessed Laura Vicuña Community of the Daughters of Mary Help of Christians of Fianarantsoa, of Mary Source of Life Province (MDG) did not report any damage to people and structures, even if several trees fell in the courtyard of the House and School.

Unfortunately, however, among the families of the students of the School, of the staff, and of the FMA, there were victims, or people who had their homes destroyed and flooded. Some have lost everything to the floods. People are beginning to repair what is recoverable, but in the face of such devastation they need concrete help.

The FMA of the Community, with the collaboration of the Technical Development Office of the city, are involved in helping the population and coordinating the distribution of basic necessities to people in difficulty and to the families of the students of the School.

The Institute of the Daughters of Mary Help of Christians collaborates in the mission in favor of populations in situations of hardship, and counts on the generosity and solidarity of all. It is possible to send contributions and offerings in the manner indicated on the Website of the FMA Institute, indicating the Madagascar Emergency in the motive.

State of emergency in Chile

Relief Response to Landslide Victims in the Philippines