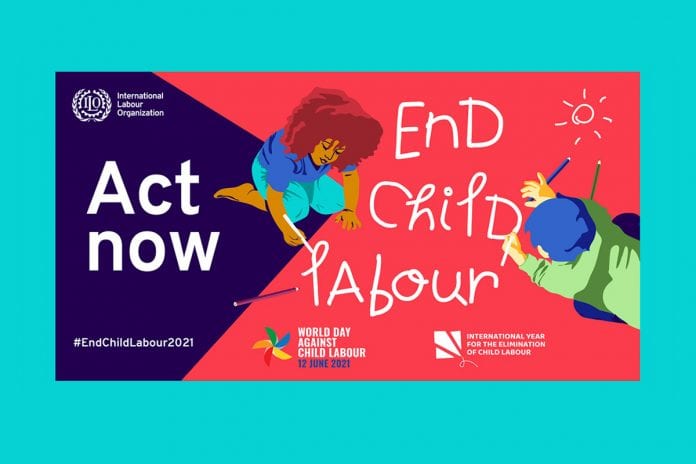 Rome (Italy). World Day Against Child Labour is celebrated on 12 June 2021, established in 2002 by the International Labour Organization (ILO) – United Nations specialized agency that works to promote social justice and rights at work – in order to draw the attention of civil society, in particular governments, employers and workers’ organizations, to the situation of child workers and actions to remedy it.

The United Nations General Assembly declared 2021 the International Year for the Elimination of Child Labour, urging governments to take the necessary measures to promote decent work and achieve the envisaged  Goal 8.7 of Agenda 2030 on sustainable development: “to end child labour in all its forms by 2025”.

In this direction, the ILO has established Alliance 8.7, a global alliance of partners to end child labour, forced labor, modern slavery, and human trafficking.

Child labour is defined by international labor standards as the work activity that deprives boys and girls of their childhood, their dignity and negatively affects their psycho-physical development. It includes various forms of exploitation and abuse often caused by conditions of poverty, lack of education, economic and political situations in which the rights of boys and girls are not respected. Children in a situation of child labour are denied the right to go to school, the opportunity to play, and enjoy their loved ones (cf. Document on the International Year for the Elimination of Child Labour).

The ILO estimates that around 160 million children, 63 million girls and 97 million boys,  are victims of child labor, half of whom, around 79 million, are forced into work activities that put their health, safety, and moral development at risk. Between 2000 and 2016, there was a 38% decrease in child labour globally. The report “Child labor: global estimates 2020, trends and the road forward” — published on the occasion of World Day Against Child Labor 2021 – signals that progress towards the elimination of child labour has suffered a setback, due to the impact of the Covid-19 pandemic which, for many children and their families, caused the interruption of education, instruction, and training courses, as well as illnesses and the loss of family income.

World Day 2021, with the slogan #EndChildLabour2021, is in line with initiatives undertaken in the International Year for the Elimination of Child Labour, information and awareness of civil society on this problem of global importance.

During the 109th International Labour Conference, 10 June 2021 ILO and UNICEF will present the new dates  (2016-2020) on the evolution of child labor, considering the influence of the Covid-19 pandemic and the economic crisis. Speakers will talk about the steps to be taken towards the 2025 milestone, towards the 5th Global Conference on Child Labour to be held in South Africa in 2022.

Starting from the presentation of the report, an “Action Week” will be promoted with events and activities through which the partners will present the progress made with the concrete actions taken for the elimination of child labor, and which will be published on the Web Site of the International Year for the Elimination of Child Labour 2021.

Another global initiative is Music against child labour, a singing competition that focuses on the potential of music to support the campaign against child labor. Promoted by the ILO since 2013, by JM International and the International Federation of Musicians (FIM), together with renowned musicians and key partners from the world of music, the initiative invites musicians, professionals and amateurs, to propose new songs on this theme. The winners will be announced on 10 June 2021 during the 109th International Labour Conference.

Pope Francis, in the  General Audience of 10 June 2020, reminds about the responsibility of each person and of the Institutions towards minors:

“In the current health emergency situation, in various countries many children and young people are forced to do work inappropriate for their age, to help their families in conditions of extreme poverty. In many cases, it is a question of forms of slavery and imprisonment, with consequent physical and psychological suffering. We are all responsible for this. I appeal to the institutions to make every effort to protect minors, filling the economic and social gaps that underlie the distorted dynamic in which they are unfortunately involved.”

In continuity with the charismatic experience of Valdocco and Mornese, in every corner of the world, the Institute of the Daughters of Mary Help of Christians is committed to guaranteeing human rights and promoting the integral growth of children, adolescents, and young people, also in disadvantaged situations, through works of hospitality and educational environments that favor accompaniment and scholastic and professional formation, towards a future of hope for them and their families.

The World Day of Reflection on Child Labour calls upon the Educating Communities of the FMA Institute to prevent and support in contexts of hardship in promoting respect for the dignity and rights of minors.

Children are the future of the human family: all of us have the task of promoting their growth, health, and serenity!

In solidarity against hunger – BAP