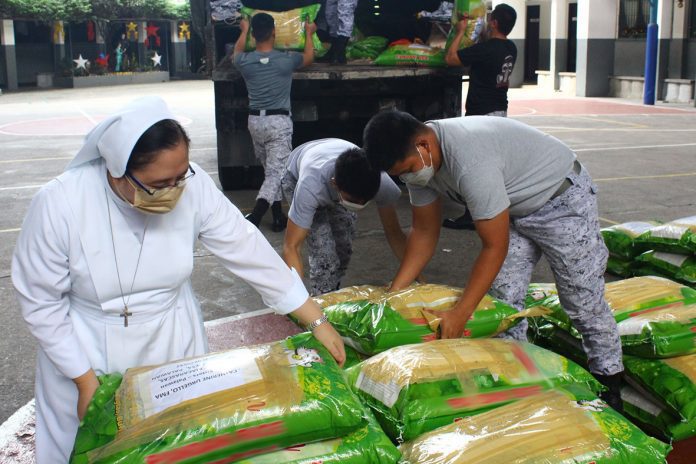 Philippines). The Daughters of Mary Help of Christians and the Educating Communities of the Province of St. Mary D. Mazzarello (FIL) are engaged in various relief and support activities after typhoon Rai, known in the Philippines as Typhoon Odette, which struck the country between 16 and 18 December 2021.

The typhoon was one of the strongest that hit the archipelago, claiming victims, displacing thousands of families, and destroying homes, community infrastructure, agricultural land, vegetation, livestock farms, etc. In some areas, electricity, telecommunications, transport, and other services have been restored, while many areas with serious damage are still unreachable. This has caused delays in news and the transport of relief goods.

The Educating Communities of the Province – FMA, lay collaborators, students and families, benefactors – have taken action to provide food to the populations of the islands of Cebu, located in the Central Visayas region, and of Palawan, where the 4 FMA communities are located (three in Cebu and one in Palawan). Food and clean water are lacking and very expensive. While waiting for food aid to arrive, the FMA of these communities, which in turn have suffered damage to their structures, are looking for food to buy for the poor in the area.

On 23 December 2021, the Educating Communities shipped hundreds of bags of rice and boxes of canned food from the island of Negros to the island of Cebu, with a transport requiring 8-10 hours of travel by ship. The next day, the Philippine Armed Forces lent their service to help ship rice and canned goods from the port of Manila to the port of Palawan, with a 25-hour journey.

As of December 29, the three FMA communities of Cebu distributed packages with food and water to 1150 displaced families in the surrounding areas: Tungkop, Inayagan, Estaca, Camansi, Abuno, Tuyan, Basak, Buhisan, Punta, Lapu-lapu, and Guindaruhan. Among the recipients were the families of teachers, staff, students, oratorians, and alumni of the three FMA communities of Cebu.

On December 30, thanks to the generosity of a benefactor, the FMA Community of Puerto Princesa, Palawan, managed to distribute about 200 packages of food to the families of an indigenous tribe and to some villages in the area. The FMA also prepared a complete meal for 350 people from Baranggay Langogan. Before delivering the packages, the team of volunteers organized some games for the children and listening and sharing groups for adults about what they are experiencing. Given the damage to the lands and structures of the communities, the FMA activated the ‘cash for work’ program, giving a small job to about fifteen men and women in the area for repairs.

On 4 January 2022, in Don Bosco School of St. John Bosco Community in Manila, some men of the Philippines Armed Forces, with the help of the School staff, loaded two army trucks with food and water of about 3,500 kg. to be sent to Cebu via a Philippine Navy ship.

On 5 January 2022, Sr. Phebe Lacse, FMA of the Community of St. Mary D. Mazzarello of Bacolod City, Negros West, took part in a rescue expedition to Sipalay, 115 km from Bacolod City and Bais, Negros East, led by the Negros West Women Religious Association (NOWRA), in partnership with the Philippine National Police Special Action Force (SAF). The group, made up of consecrated sisters and the police, worked in synodality to bring aid to more than 250 people in the mountainous and isolated areas hit by the typhoon.

Relief initiatives are still underway in Cebu and Palawan, with a solidarity network in which all work together to alleviate the suffering and bring hope to these populations once again tried by the floods and devastation caused by natural disasters.

The Institute of the Daughters of Mary Help of Christians collaborates in the mission in favor of populations in situations of hardship, counting on the generosity and solidarity of everyone.

It is possible to send contributions and offerings in the manner shown on the FMA Institute website, indicating the Philippine Emergency in the causal.

Networking to reach the poorest – INM

Now is the favorable time