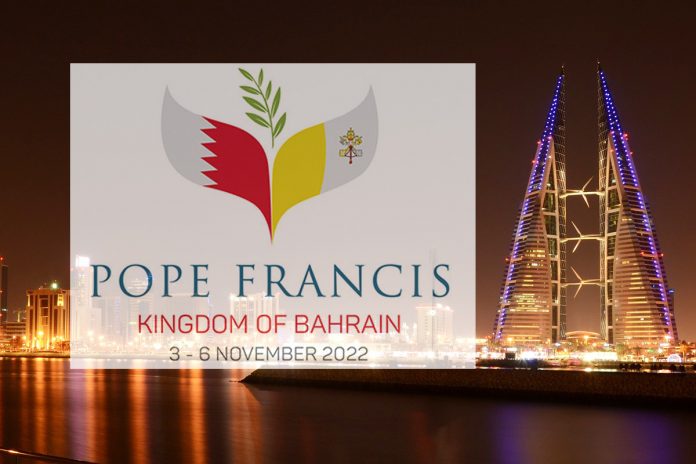 Rome (Italy). From 3 to 6 November 2022, the Holy Father will be in the Kingdom of Bahrain, a nation that includes an archipelago of more than 30 islands in the Persian Gulf, off the eastern coast of Saudi Arabia, for his 39th apostolic journey, on the occasion of the “Bahrain Forum for Dialogue: East and West for Human Coexistence”, a dialogue forum for peaceful coexistence. Invited by the King of Bahrain, Hamad Bin Issa Bin Salman Al Khalifa, and by the apostolic administrator of the local Church, Msgr. Paul Hinder, Pope Francis is the first Pontiff to go to Bahrain.

“Peace on earth to people of good will”, taken from the Gospel of Luke (Lk 2:14) is the motto chosen for the trip. The logo consists of the flags of the Kingdom of Bahrain and the Holy See, represented as two hands open to God, a symbol of the commitment of peoples and nations to the encounter as “brothers and sisters”, whose fruit is the gift of peace, symbolized by the olive branch. The Apostolic Journey is entrusted to the intercession of the Blessed Virgin Mary, venerated with the title of Our Lady of Arabia in the cathedral of the same name, which is why the inscription “Pope Francis” is blue.

The visit and participation in the Forum, as Card. Secretary of State Msgr. Pietro Parolin reiterated, in an interview with the Osservatore Romano and Vatican Radio-Vatican News, are an invitation “to dialogue, to the meeting between the East and West, in a reality like that of Bahrain, which is multi-ethnic, multi-cultural, and multi-religious, therefore the ability to live together, the ability to collaborate even in a composite reality such as the one which characterizes that country”.

In fact, the program foresees, in addition to the meeting with the grand imam of Al-Azhar, Ahmed el-Tayeb, on November 4, after the closing of the Forum, the meeting with the members of the Muslim Council of Elders. This is an organization that represents Muslim religious leaders committed in favor of dialogue and respect for religions, at the “Sakhir Royal Palace” Mosque and, subsequently, an ecumenical meeting and prayer for peace at the Cathedral of Our Lady of Arabia, where representatives from different Countries will converge.

On the morning of 5 November, at the “Bahrain National Stadium” in Awali, Pope Francis will preside at the Holy Mass for the country’s Catholics, a minority, since out of about one and a half million inhabitants, there are only 161 thousand. In afternoon, there is the appointment with the young people at Sacred Heart School.

On Sunday 6, the Holy Father will reach the capital Manama for a prayer encounter and the Angelus with the Bishops, priests, consecrated persons, seminarians, and pastoral workers at Sacred Heart Church. After this, he will go back to Awali for the farewell ceremony at the “Sakhir Air Base”, and then return to Rome in the evening.

At the Angelus of November 1, the Solemnity of All Saints, the Pope asked to accompany him with prayer on this journey under the banner of fraternity, dialogue, and peace:

“It will be a Journey under the banner of dialogue. I will participate in a Forum that thematizes the essential need for East and West to meet each other more for the good of human coexistence. I will have the opportunity to converse with religious representatives, especially Muslims. I ask everyone to accompany me with prayer, so that every encounter and event may be a fruitful opportunity to support, in the name of God, the cause of fraternity and peace, of which our times are in dire and urgent need”.