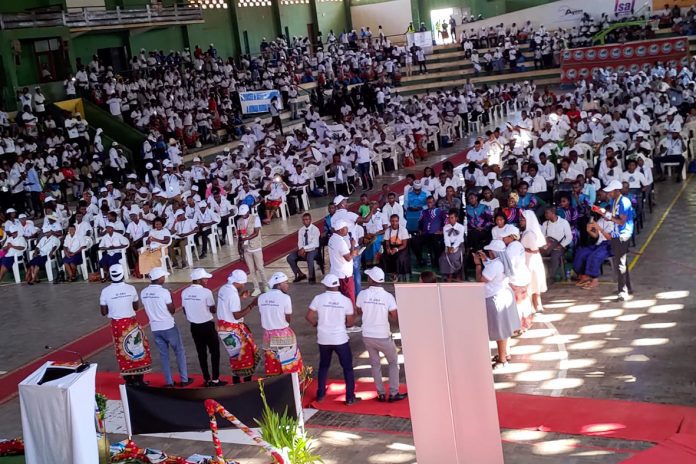 Mozambique. From 17 to 20 November 2022, the National Youth Day was held in Nampula, in northern Mozambique on the theme: “We have found the Messiah. Accompanying young people in society today”.

Given the cultural diversity present in Mozambique, it was also an opportunity for the young people to get to know the Macua culture in its entirety, from the gastronomy, to the customs, and even the way of praying.

The organization was very efficient. The young people were welcomed into the families of the parishioners and, given the excellent welcome, they had no difficulty in integrating, on the contrary, they found a new family and at the same time had the opportunity of a unique missionary and cultural experience.

On 16 November,  pilgrims from the various parishes of the Archdiocese of Nampula were entrusted with a group. The activities began on the afternoon of the 17th, at the Cathedral of Nampula, with the presentation parade of each Diocese done in a creative way, culminating with the Holy Mass, presided over by Archbishop Msgr. Inácio Saúre Vice-President of the Episcopal Conference of Mozambique and Representative of the Commission for Youth, which officially opened the National Youth Day (NYG).

On the morning of the 18th the young people listened to the first catechesis, “Encounter with Christ: starting point for the accompaniment of young people,”  followed by the culminating confessions and the Eucharistic Celebration. The afternoon was reserved for visiting the tourist places of the city of Nampula, whose streets were invaded by the joy of young people.

“Youth in society: the challenge of accompanying young people in choosing their professional orientation” was the theme of the catechesis on the third morning, while in the afternoon, an interreligious meeting was held in the Sports Pavilion with young people from Christian Churches and Muslims .

Each religious group presented itself through various expressions: singing, theatre, poetry, and other creative methods that delighted the young people and nurtured a climate of fraternity. Subsequently, there was a pilgrimage with the Cross through the main streets of the city, up to the Cathedral of Nampula, where the Vigil Mass was celebrated, presided over by Msgr. Francisco Chimoio, Archbishop of Maputo.

After dinner, Fr. Rafael Sapato, Director of the Secretariat of the Interregional Association of Bishops of Southern Africa (IMBISA), gave a conference on single mothers and presented some pastoral guidelines to be taken into consideration in these situations. Then there was the exposition of the Blessed Sacrament and the young people had the opportunity to have a personal encounter with Jesus in the Eucharist. After this time of prayer, there was a cultural vigil which ended at dawn.

Early Sunday morning, Holy Mass was celebrated for the sending of the pilgrims, presided over by Msgr. Inácio Saúre. During the celebration, the third NYD was announced, which will be held in the Archdiocese of Maputo in 2025, an announcement welcomed with great joy by the young people of Maputo.

The Daughters of Mary Help of Christians collaborated in the realization of this event of joy in view of WYD 2023 in Lisbon, committing themselves to the preparation starting from the different corners of the country where they were present and accompanying the young people of their own realities to live this experience of faith in communion with other young people, benefiting from the exchange of experiences and mutual cultural and spiritual enrichment.