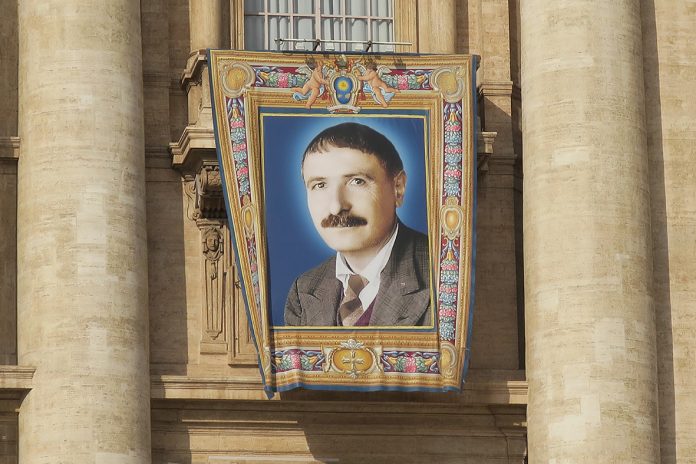 Rome (Italy). On 9 October 2022, the Eucharistic Celebration presided over by the Holy Father Francis took place in the Piazza of St. Peter’s Square in Rome, with the Rite of Canonization of the professed layman of the Society of St. Francis de Sales, Artemide Zatti, and of Msgr. Giovanni Battista Scalabrini, Bishop and Founder of the Congregation of the Missionaries of San Carlo and of the Congregation of the Missionary Sisters of San Carlo Borromeo.

In the Piazza crowded with the faithful and pilgrims who came from all over Italy and the world to acclaim the new saints, the celebration opened, after the entrance song, “Veni, creator Spiritus”, the invocation to the Spirito Santo sung by the Schola. Cardinal Marcello Semeraro, Prefect of the Dicastery for the Causes of Saints, accompanied by the Postulators, Fr. Graziano Battistella, of the Scalabrine Congregation, and Fr. Pierluigi Cameroni, a Salesian of Don Bosco, then went to the Holy Father, presenting the request to proceed with the Canonization. Then Cardinal Semeraro briefly shared their respective biographies.

The solemn act, which took place shortly after, was sustained by the invocation of the intercession of the Blessed Virgin Mary and of all the Saints, raised by the faithful present in the Square and in connection from all over the world through live television and streaming, to implore the grace of the inscription of the two Blesseds in the Register of Saints.

The Holy Father Francis therefore pronounced the formula of Canonization in Latin: “… we declare and define as Saints the Blesseds Giovanni Battista Scalabrini and Artemide Zatti and we enroll them in the Register of Saints, establishing that throughout the Church they are devoutly honored among the Saints”.

A great applause from the assembly of the faithful accompanied the proclamation, followed by the incensing and deposition at the foot of the statue of Our Lady the distinguished relics of the two new Saints, and the gratitude of the Cardinal Prefect of the Dicastery for the Causes of Saints, who at the at the same time  requested and obtained from the Pontiff the assent to the drafting of the Apostolic Letter regarding the Canonization (Source: infoAns).

The Celebration, concelebrated by various Cardinals, Archbishops, Bishops, and priests, many of them Salesians of Don Bosco, including the Rector Major, Fr. Ángel Fernández Artime, was then resumed with the Liturgy of the Word. In the piazza, next to the diplomatic corps, were present the Superior General of the Institute of the Daughters of Mary Help of Christians, Mother Chiara Cazzuola; the Vicar, Sr. María del Rosario García Ribas; and the Councilor for the Salesian Family, Sr. Leslie Sandigo.

In his homily, Pope Francis referred to the Sunday Gospel, which narrates the healing of ten lepers (Lk 17: 11-19), two aspects, walking together and giving thanks, linking them to the new Saints:

“Bishop Scalabrini, who founded two Congregations for the care of migrants, one male and one female, affirmed that in the common walk of those who emigrate one must not only see problems, but also a plan of Providence. (…) Scalabrini looked beyond, looked ahead, towards a world and a Church without barriers, without foreigners.

For his part, the Salesian Brother Artemide Zatti, with his bicycle, was a living example of gratitude. Cured of tuberculosis, he dedicated his whole life to pleasing others, to heal the sick with love and tenderness. It is said that he was been seen carrying the dead body of one of his sick people on his shoulders. Full of gratitude for what he had received, he wanted to say ‘thank you’ by taking on the wounds of others.”

The Pope concluded the homily by inviting everyone to entrust themselves to their intercession, “Let us pray that these holy brothers of ours will help us to walk together, without walls of division; and to cultivate this nobility of soul so pleasing to God which is gratitude”.

In the Angelus at the end of the Celebration, he thanked “all those present who had come to honor the new Saints” and greeted “in particular the Missionaries of St. Charles Borromeo and the Salesian Brothers“, who arrived in Rome in about 600 for this historical event.

The festive atmosphere between the two religious families animated the Piazza and the adjacent streets for a long time, between group photos and hugs, rediscovering familiar faces or sharing, in simplicity, the joy of being part of the same path of holiness that enriches the Church more and more with shining examples.

Speak with the heart

I heard your cry