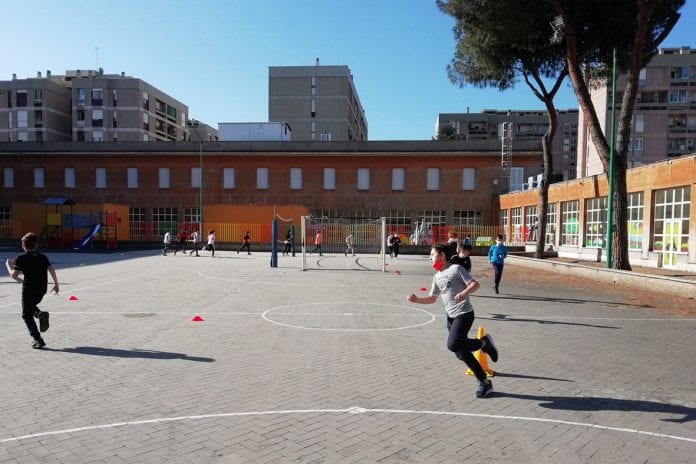 Rome (Italy). The students of St. John Bosco First Level Secondary School in Rome, of the Roman Province St. John Bosco (IRO), during the school year 2020/2021, carried out the International Educational Project of Education for Global Citizenship and Solidarity Race against Hunger, with the Service-Learning methodology, which combines community service and learning.

The Race against Hunger is a project conceived by the International Humanitarian Organization, Action against  Hunger, engaged in the fight against hunger and child malnutrition.  Among the objectives, one is to empower children and young people for social issues, with particular reference to world hunger.

The objectives of the Project are: study the science of nutrition by introducing the topics of nutritional function, nutrition control, and the physical and psychological consequences of malnutrition and denutrition; work across the board on civic education and citizenship education; acquire relational and intercultural skills, making students an active part of the learning process; talk about the environment and climate change, the theme of food in reference to the 17 sustainable development goals of Agenda 2030; investigate the causes and consequences of hunger in the world, analyzing issues such as current wars, drought, pollution, climate change, and poverty.

The Project began with the first phase of school enrollment in the months of June 2020-January 2021; a second phase in the months of February-April, ‘On-line teaching’, lasting one hour, realized through videos, interactive activities, and moments of reflection, with the involvement of the students  who shared testimonies in the classroom of what is happening in contexts of war, poverty, and climate change.

During the third phase between April and May, the students went ‘into action’ to raise the awareness of relatives and friends through the use of a ‘solidarity passport’, which helped them to resume the topics on hunger and malnutrition carried out in class.

The sensitized people were therefore able to decide to become a ‘sponsor’ of a student and promise to give a donation, even symbolic, for each lap covered by the student on the day of the race.

On 6 May 2021, with the material kits  provided by the Organization, the School organized a Race, the final event of the Project, in which the students committed themselves to multiplying with more running laps, the donation promises made by their own sponsor:

Martina, a student  from class 1a, says, “In this competition all the students ran laps of the school yard until they were ‘exhausted’.  Each student was financially supported by one or more sponsors: parents, uncles and aunts, grandparents, and friends who financed their student for each lap. In the morning, it was the turn of the first classes; from mid-morning, the students of the second classes ran; in the afternoon they concluded with the third classes. The various competitions were held in the courtyard of the School, in the presence of the Coordinator of Educational and Didactic activities, the Professors who accompanied the classes, and the Professor of Physical Education, who organized the event. All the pupils are committed to the task of saving human lives, of children who suffer from hunger every day. To help a life, only 28 euros were needed. The young people went beyond and thanks to the contribution of their sponsors, they reached a figure that could save 101 people. The event demonstrated that ‘unity is strength’, as the students put physical and mental strength into play, while the sponsors contributed with their generosity, even if in this moment there is strong economic difficulty”.

The students of St. John Bosco First Level Secondary School had a significant teaching experience, which allowed them to learn about the problems of the world and to take concrete action starting from their own reality, involving people and family members.

Raffaella from class 1a, comments: “We heard stories of children who do not have water, food… Something that for us can be normal, like taking a shower, is almost impossible for them to do. The Association asked us to help these children, but how? Through a race, or rather the ‘race against hunger’ and we immediately accepted! Some of us managed to do up to 35 laps and everyone wanted to participate, even those who couldn’t run at that moment, and walked. Once the race was over, each of us was given a plaque with the number 28, which represents the amount in euros needed to save a child’s life. The moment I received it was wonderful because I was aware and very happy to have saved the life of more than one child. Our class was very enthusiastic about this initiative. It is always beautiful to help those in need”.

United in prayer for peace