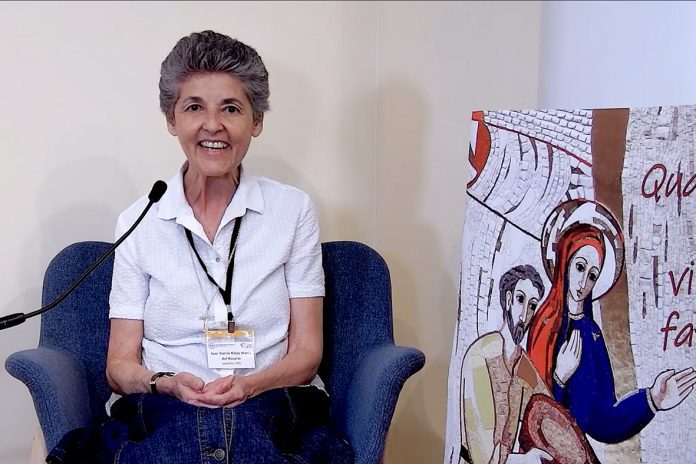 Madrid (Spain). In an interview published on November 18, 2021 in the Catholic information weekly Alfa and Omega, a supplement to the Spanish newspaper ABC, Sr. María del Rosario García Ribas, elected Vicar General of the Institute of the Daughters of Mary Help of Christians during the XXIV General Chapter, speaks of the new challenges to which the Daughters of Mary Help of Christians and the Educating Communities are called in the mission with young people, in a scenario still characterized by the Covid-19 pandemic.

“In the pandemic, young people have rediscovered forgotten values” is the title of the interview by the journalist María Martínez López, in which Sr. María del Rosario recalls the event of the GCXXIV recently lived, where the Chapter Members, looking at the example of Mary at Cana of Galilee, reflected on how to be a “presence that listens, walks with others, in communion with the community, outgoing, and online to ‘identify God’s calls’ in an ‘unprecedented’ reality” such as the present one.

During the pandemic, the young people of the works in which the FMA are engaged “shared the pain, insecurity, and uncertainty with all humanity” says Sr. María del Rosario, who before being called to the service of Vicar General was Provincial of the Province of Mary Help of Christians (SPA), and they felt “pessimism, sadness, loneliness, and difficulty in projecting themselves into the future.” However, from the sharing of experiences, there also emerged “generosity, solidarity, and commitment” generated from this time of crisis.

On the part of the Educating Communities, there was no lack of commitment to get close to young people, through material assistance to the families of students and the help for distance learning during the lockdown, sending material, opening a radio station or by financing the Wi-Fi connection at home. In many of these initiatives, “young people were protagonists”,  says the Vicar General, and “they felt called to rediscover values that perhaps they had forgotten.”

In the interview, Sr. María del Rosario also takes up the aspect of vocations and stresses that the essential is not in the search for better forms of management and organization, but in the “desire to continue to respond with fidelity to the charism” and to bet on “what is truly fundamental: responding to the profound aspirations of young people, especially the weakest; accompany them from an educational point of view and propose the Gospel as a source of happiness.”

Young people are “holy ground and we want to see them, as Don Bosco said, happy here and in eternity”, she stresses. “Our presence among them reaches its peak when they meet face to face with Jesus of Nazareth. This is our goal.” Reaching them through education in their free time “does not mean staying on the surface, opening up courtyards for them to play, gyms or theaters to perform their musicals.” All these activities “are accompanied by a clear faith proposal” and tailored to them.

In this regard, Sister María del Rosario acknowledges that the post-Synodal Exhortation Christus Vivit, which Pope Francis encouraged to continue to deepen, is “a true gift”. It has “very concrete keys”  which the Daughters of Mary Help of Christians are making use of to “consolidate and open new perspectives” in accompaniment and to ensure that young people “are protagonists” in the life of the Educating Communities.

The door of holiness

Stir into flame the gift of God that is in you...