Chennai (India). On February 23, 2019, at the Provincial House in Chennai, the formation meeting began, organized by the Formation Sector for the presentation of the Guidelines for the Formation period of Temporary Vows. Sr. Nieves Reboso, Councilor for Formation; Sr. Maria Fisichella and Sr. Anelfreda Miranda, Collaborators of the Formation Sector will meet the FMA of the Indian Provinces in February, March, and April to share the reflection process on Temporary Vows and the Guidelines to help the Temporary Professed grow in their vocational identity and to enhance the missionary dimension of the communities.

This meeting was attended by the members of the Provincial Council, the Community Animators, and the Formators of St. Thomas the Apostle Province (INM).

The day began with a welcome ceremony by the community of Our Lady’s Center in Chetpet, Chennai.  Fr. Kanaga Maria Arokiam, Regional Councilor for South Asia; Sister Nieves Reboso, Sister Maria Fisichella, Sister Anelfreda Miranda, and the Provincial, Sister Maria Nirmala Lazar were welcomed with flowers woven into a garland and honored with kumkum and sandal. The Formation Plan was presented through gestures and symbols (diversity of seeds and earth, empty amphorae). Then a group of young people danced and introduced the Eucharistic celebration.

The theme of the day was “Do whatever He tells you”. The celebrant stressed that Mary was the first formator of Jesus, accompanying the Son so that God’s plan could be realized in His life.

The morning work began with a prayer and reflection on humanity and the five natural elements: Air, Water, Fire, Earth, and Space. Sister Nieves emphasized that the last words of Mary in the Gospel were “Do whatever He tells you”. During group work, each sister shared the joys and difficulties experienced in initial formation. At the assembly, each group shared through a symbolic gesture, the experience and expectations for the meeting.

The Guidelines for the formation period of Temporary Vows was then given to each sister. In the afternoon, the first chapter was studied: The challenges of the context for the formation processes of Temporary Vows. In the evening, the second chapter was presented ‘Listening to the Temporary Professed, Formation Communities, and Formators’. The day ended with the Good Night of Sister Nieves who announced the good news of the new FMA who will go to Sri Lanka. 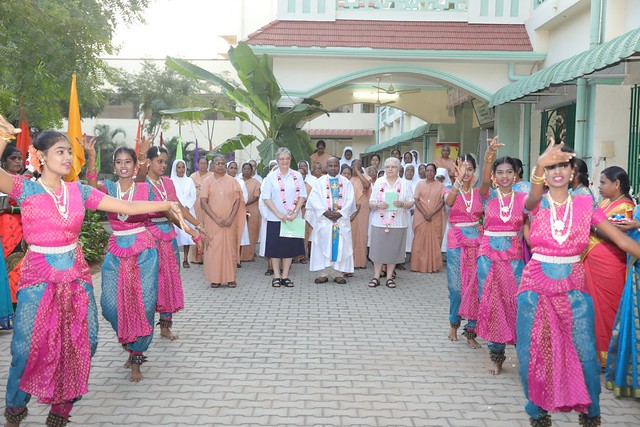 Moved by Hope, we walk the path of freedom and reconciliation.

Animator of the Association of Mary Help of Christians

Discernment: a gift to ask for, to welcome, to cultivate

A time to renew hope

I am a mission

A journey of gazes

8 March 2019
We use cookies to make sure you can have the best experience on our site. If you continue browsing you accept the use of cookies.OkPrivacy and Cookies