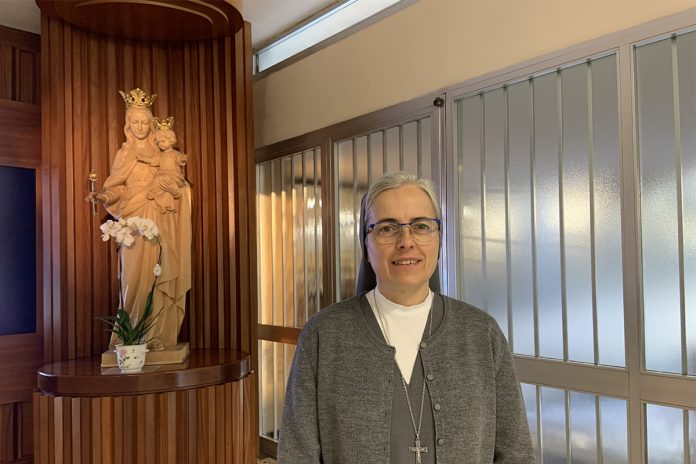 Rome (Italy). Sr. Lidia Strzelczyk was born on 23 October 1968 in Poland. Her family of 4 children has solid Christian roots. Faith is part of their daily life, as it is lived throughout the Country.

As a young woman she was part of the Ecclesial Movement for young people called Oasis, the ‘Light-Life’ Movement born after the Second Vatican Council, which has a strong liturgical and biblical imprint. It is here that Sr. Lidia experienced the presence of God and from here began her preparation for the radical handing over of her life to Him.

During this time she met the Daughters of Mary Help of Christians through her companions of the apostolic group and after graduating from Classical High School, she entered the FMA Institute in 1987.

After her initial formation, she worked for a year in the State School teaching religion and then in the years 1992 – 1997, she studied Pedagogy at the Catholic University of Lublin.

After Perpetual Profession from 1997  until 2002, she worked as a Catechist in the State School, in  Youth Ministry in a Salesian parish, and a year in the social work at the Diocesan Caritas with young mothers.

From 2002 to 2004, she completed the study of Salesian Spirituality at the Pontifical Faculty of Educational Sciences “Auxilium” in Rome.

From 2004 and for 10 years, she was Novice Formator and Animator of the Novitiate Community, where there is also the Kindergarten and the festive Oratory.

In 2014, she received the appointment of Provincial of the Province of Our Lady of Jasna Gora (PLJ) Łomianki – Warsaw (Poland). Her style of animation is characterized by a strong formative imprint, in which she always sought to give much space to listening to the sisters and the Educating Communities, and to discerning the qualities and characteristic traits of the sisters in order to awaken in them the best energies and visions for the educational mission.

Among the priorities of her service there is also strengthening and renewing the covenant with God of the sisters through the Word in the personal and community life of the Province and personal and community accompaniment at all levels in the Educating Communities  particularly for the young.  She has always had at heart the pastoral and educational work with families, which greatly developed through the commitment of many sisters.

In 2020, she was Community Animator for one year. On 22 August 2021, she was appointed Provincial of the Province of Mary Help of Christians (PLA) Wrocław – Poland.

During the XXIV General Chapter, the Chapter Assembly elected her as Visiting Councilor. In this new mission that the Lord and the Help of Christians have entrusted to her, she is ready to serve with humility and availability in synodality with all the sisters of the FMA Institute.

Vocational Communities: A Yes that is renewed over time