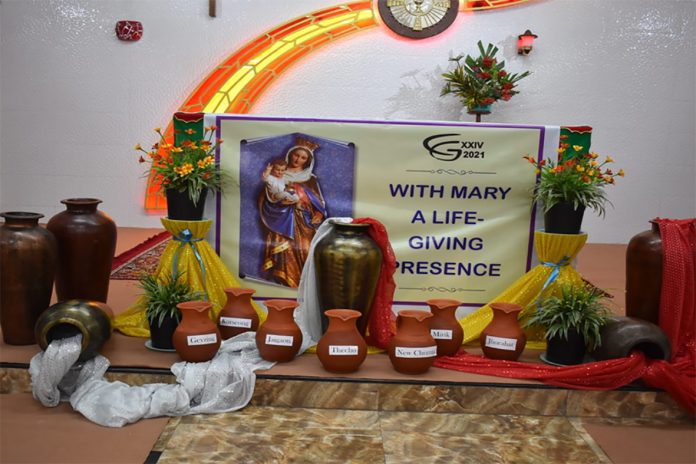 Calcutta (India). On 7 January 2022, the Provincial of Mary Help of Christians Province of Calcutta (INC) Sr. Leelamma Palliparambil and the Delegate, Sr. Stella Potteparambil, concluded the transmission of the experience of the XXIV General Chapter, lived in Rome in the Generalate of the FMA Institute, from 17 September to 24 October 2021.

The transmission took place in five meetings: from 12 to 15 November in Jaigaon “Nirmala Niketan”, in North Bengal, from 10 to 13 December in New Delhi, Vasant Vihar, two meetings in the Provincial House of Calcutta Dum Dum – 1-4 and 18-22 December, and the last, 5-7 January 2022, in Bandel, Calcutta.

The six sisters who represented the servants, to the rhythm of the song “The daughters of Israel dance with joy”, involved the FMA of the Province in reliving the atmosphere of the “Wedding Feast at Cana” described in the passage from the Gospel of John from which the theme of GCXXIV was taken: “Do whatever he tells you” (Jn 2:5).

Sr. Leelamma and Sr. Stella presented a panorama of the participants, of the process and methodology, of reflection and sharing in the Commissions, of the report on the life of the Institute (2014-2021) and of the reports on the three nuclei of the Chapter theme.

The presentation of the Acts of the Chapter, With Mary be a ‘presence’ that generates life, which shared the discourses and messages of GC XXIV and the priority choices, deliberations, decisions, and action guidelines, was an expression of gratitude to the Lord for the work done by the Chapter members and an invitation to resume the journey “from Cana to Capernaum”, sharing life and mission with the Educating Communities.

The five groups of FMA who listened to the transmission of GC XXIV welcomed with joy the experiences and contents communicated in a creative way by the two Chapter members. The transmission aroused in the sisters profound gratitude for the gift of the vocation and the Salesian charism and a renewed enthusiasm to go forward with fidelity towards a future of hope.

Message of the young to the participants at GC XXIV –...