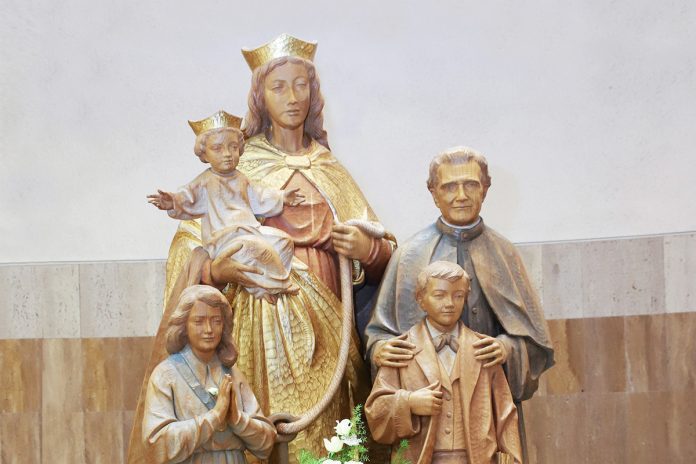 Rome (Italy). On 6 May 2022, the liturgical memory is celebrated of St. Dominic Savio, “A true masterpiece of the Spirit and fruit of the educational method of St. John Bosco”. Don Bosco wrote the biographies of the young exemplars of the Valdocco Oratory – Domenico Savio, Francesco Besucco, and Michele Magone – precisely with the aim of spreading their virtues and ensuring that they were imitated, first of all by their companions in the Oratory, later by the young people from all over the world and of all generations.

In the “Life of the young Savio Dominic”, Don Bosco writes: “It is precisely of youthful age to change often about what one wants. This was not the case with our Domenic. All the virtues grew in him wonderfully and grew together without one overshadowing the other. (…) The first thing he was advised to do to make himself a saint was to work to gain souls for God. This thought became the continuous breath of his life” (Published Works, XI, Rome 1976, 187ss passim).

On 8 December 1854, while Pope Pius IX proclaimed the dogma of the Immaculate Conception, Dominic consecrated himself to Mary by reading a few lines he had written on a piece of paper, “Mary, I give you my heart. Make it yours always. Jesus and Mary, always be my friends, but out of pity let me die before the misfortune happens to me of committing a single sin.”

In the homily of his canonization, on 12 June 1954, Pope Pius XII said of him, “At the school of his spiritual Master, the great Saint Don Bosco, he learned how the joy of serving God and making Him loved by others can become a powerful means of apostolate. (…) He incited his companions to piety, to good conduct, to frequent the Sacraments, to recite the Holy Rosary, to flee from evil and temptations”.

The exemplary virtues of Dominic, spread by the first Salesians of Don Bosco and the Daughters of Mary Help of Christians to the places of mission and made known through the biography written by Don Bosco and the Salesian Bulletin, were therefore imitated by many adolescents, including Blessed Laura Vicuña.

The General Secretariat of the Institute of the Daughters of Mary Help of Christians offers some ideas from Laura Vicuña’s Positio super virtutibus that demonstrate the importance of Dominic Savio’s influence on her:

– She remained in the School of the Sisters until her death, that is, for the space of four years. Shortly after her entry into the School, she Confessed and a year later she made her First Communion on 30 May 1901, formulating resolutions of the type she had read in the life of St. Dominic Savio, and in particular the following: 1. In all the days of life do not love anything other than God. 2. Prefer death rather than offend Him with mortal sin: 3. (act in such a way) that God may be known and loved by all. She then frequently approached the Holy Sacraments, and in the end, received Communion daily.

– Miss Francesca Mendoza related that on the day of her First Communion, she thought she saw three stars on Laurita’s head.

– Her sister Giulia Amanda affirms that she never noticed in her sister either serious defects, or deliberate slight defects, and remembers instead that she was pious. She loved God and the Virgin very much and she made sacrifices for those who did not love God and the Virgin.

– Sr. Clementina Boneschi heard that when she made her First Communion, she made the resolution to want death rather than to commit a sin and she concludes that the love Laurita had for the Lord must have been great and truly ardent.

– She kept her resolve to die rather than stain herself with sin. She proved this abundantly when she found herself locked in alone with Mr. Manuel Mora. Or when she refused to participate in the dance at night, always in Mora’s house, preferring to spend the night in peace, despite the pleas and the cries of her mother, who tried to persuade her to please that extravagant individual, who undoubtedly would have taken revenge on the mother because of the resistance of her daughter.

– Fr. Crestanello, Fr. Ghenghini, and Fr. Berardi admired her for her extraordinary commitment to imitate the examples of Dominic Savio and the virtues of the saints whose biographies she read with eagerness.

The 1982 Salesian bulletin outlines the figure of Laura and highlights her message: “Purity, sacrifice, filial love … with an emphasis on sacrifice”. Referring to St. Dominic Savio and Zefferino Namuncurà, he writes, “Immolation was common to all three of these adolescents who blossomed in Don Bosco’s garden. The preteen Laura, however, remains the youngest of the three”.

“Homecoming” of Past Pupils of the FMA Cambodia – Province CMY