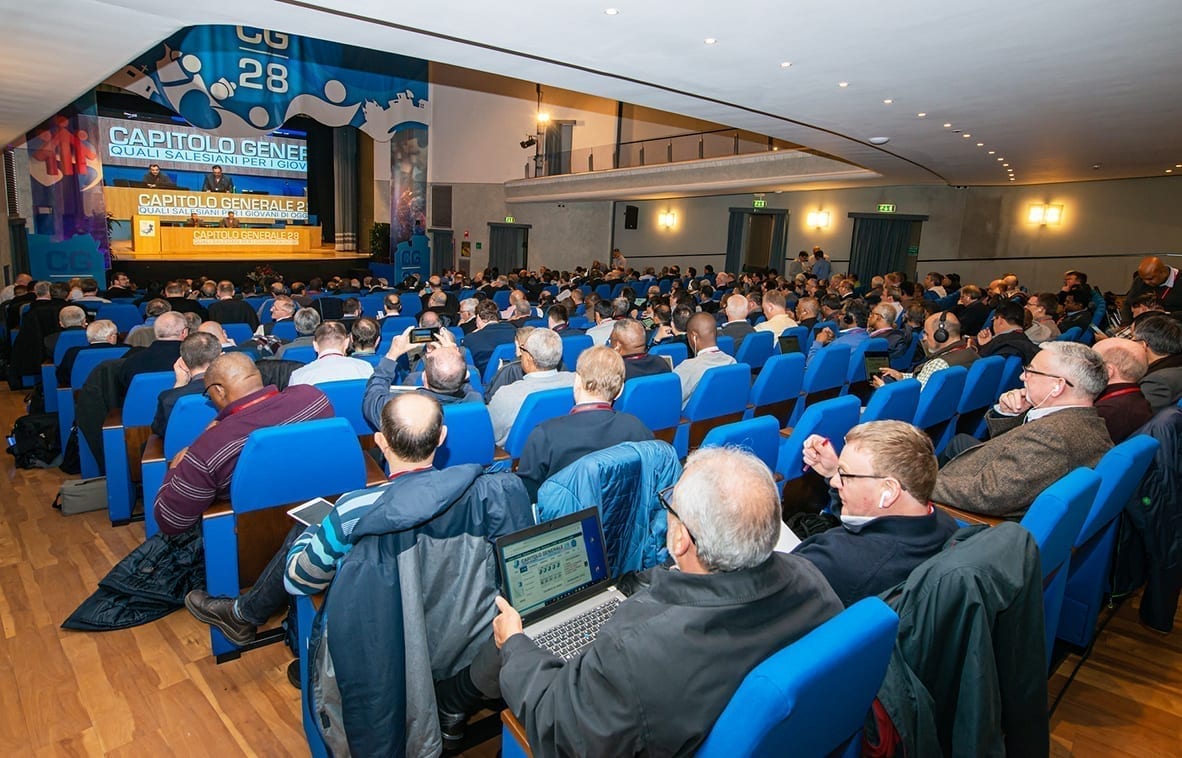 A General Chapter that “takes place in Valdocco after 62 years to give strength to the vocation and charismatic identity of Don Bosco’s disciples”, explained the Rector Major Fr. Ángel Fernández Artime, in the Press Conference for the presentation of the 28th GC, held at the Salesian Headquarters in Rome (Italy) on January 23, 2020.

23 Capitulars participated in the First General Chapter, held in Lanzo Torinese (Italy) in 1877, presided by Don Bosco. At the 28th General Chapter, the Chapter Members are 242, representing the 7 Regions into which the Congregation is divided. There are 66 Nations to which they belong, and for their mission they are present in over 130 countries on the five continents.

Fr. Stefano Vanoli, Regulator of the 28th General Chapter explains: “The participants are divided into two orders: a first group made up of the confreres who have a world or provincial level government role, the Rector Major, and members of the General Council, the Provincials or the Superiors of the various Circumscriptions; a second group made up of SDBs “delegated” by the Provinces. Then there is a third group, the “guests” who are confreres or lay people called to participate in the General Chapter at the explicit invitation of the Rector Major.

Among the participants by right are sixteen Salesians of Don Bosco from the Salesian Headquarters in Rome (Italy) and for the first time in a Chapter, the Rector Major Emeritus, Fr. Pascual Chávez Villanueva.

Two significant changes in GC28: ​​the first concerns the participation of twenty one young people from the seven regions of the Congregation. They will participate with the right to speak, in an entire week of chapter work and will give their contribution on the theme The priority of the youth mission today. The second concerns the participation of a dozen lay people from different parts of the Salesian world, called to offer their contribution on the nucleus of the mission and formation shared with the laity.

On February 15, in the Basilica of Mary Help of Christians in Valdocco, at the pre-Chapter Good Night, in the presence of the many Capitulars who had already arrived in Turin, many Daughters of Mary Help of Christians, and many lay faithful, Fr. Stefano Vanoli, with the words “We are in Valdocco, we are of Valdocco. Where  the place of our origin is, there is also the place of our originality” greeted the Capitulars present.

On February 16, the 28th General Chapter began with the Eucharistic Celebration in the Basilica of Mary Help of Christians in Valdocco, presided over by the IX Successor of Don Bosco, Fr. Ángel Fernández Artime, who said in his homily: “He is actively present among us, He who raised up and guided Don Bosco, that is, the Holy Spirit. His presence will allow us to realize our union with Don Bosco and our communion in the ‘Salesian spirit’. In the same way in which He led our Father to carry out the mission to which he was called in the Church and in the world of his time, the Spirit will accompany us all to respond to the needs of this time. The Holy Spirit of God will help us, with His impulse and our availability to let ourselves be shaped by Him, to “be with Don Bosco and with the times”, as Fr. Albera wrote. Or better yet, He will help us to be with Don Bosco today, to be the Salesians that young people, families, and society need today.”

From 17 February, the Capitulars are called to listen to the General Councilors, who will present the reports of the Sectors and Regions. This moment ends with the report of the Rector Major on the State of the Salesian Congregation, which is broadcast live at 17:30 (UTC + 1) on the ANS Facebook page.

The official opening ceremony of GC28 is scheduled for 22 February, during which the Mother General of the Daughters of Mary Help of Christians, Sister Yvonne Reungoat, will address a greeting to all the Chapter Members.

The Secretariat of GC 28, the Dicastery for Communication, and the InfoANS Agency, are committed to disseminating information on the progress of the Chapter through the Institutional Channels.

Visit of Sr. Lucy Rose to the Philippine Province