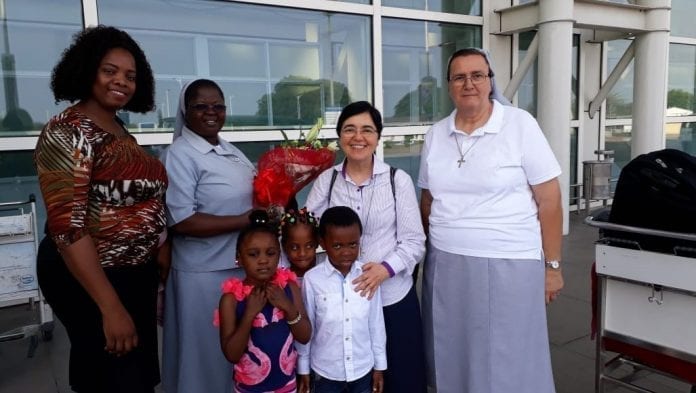 The Sisters of the St. John Bosco Province (MOZ) are living a time of grace and joy: the canonical visit of Sister Maria Helena Moreira, Councilor for Social Communications, sent by Mother to visit the educating communities. Sister Maria Helena arrived on 23 August 2018. She was welcomed by the Provincial, Sr. Zvonka Mikec, by some sisters, and also by the children of the kindergarten. Upon arrival at the Provincial House there was the welcome of the girls, the women of the literacy program, and a group of teenagers who received her with song, invoking the Lord’s blessing upon her.

The canonical visitation was prepared for by using some reflection texts presented by Father Alvaro Lopez, a missionary of the Consolata. The first was listening, the second accompaniment, and the third discernment. Before coming, Sister Maria Helena sent a letter to each FMA in which she wrote: “I come with the delicacy of the ‘Spirit of the Visitation’, celebrating the joy of the encounter in simplicity, openness, welcome, respect, reciprocal accompaniment, the characteristics lived between Mary and Elizabeth“.

The visit began with a ceremony in the Provincial House attended by some members of the Salesian Family with the traditional welcome in which some typical gestures of Mozambican culture were made, accompanied by the offering of products of the earth.

Sr. Maria Helena has already met with the Provincial Council, the Provincial Team, and the Animators. She also met with the group of young people and adolescents of Good Shepherd Parish. The Councilor transmitted to them the targeted content for each group. For the youth and adolescents, she launched the vocational proposal following the theme of the Synod of Bishops, focusing on discernment and God’s plan for each one.

After these meetings, she began her visits to the communities where she will meet with the sisters, the lay people, and the young.

The Salesian Family Sector meets with the Generalate Community