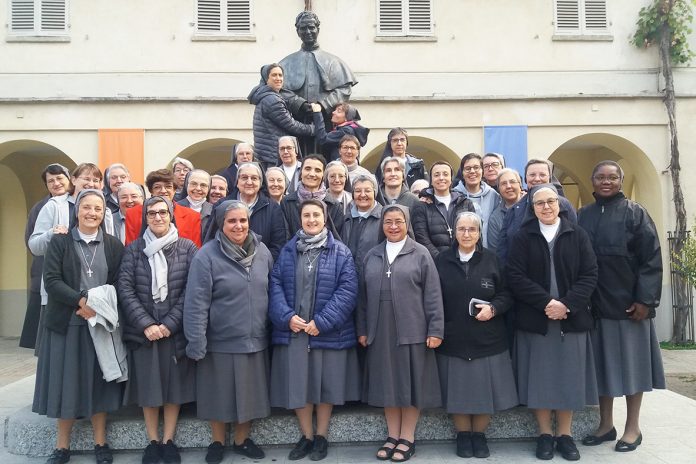 Turin (Italy). From 26 to 28 October 2022, in Turin at the headquarters of the Mary Help of Christians Province (IPI), the formation meeting for the Animators who have one or more Temporary Professed Daughters of Mary Help of Christians in their communities took place, organized by the Formation Commission Italy by the Union of Italian Provinces (UNISIT).

With the theme, ‘The community, a formative place where we grow together in generativity. Attentions, conditions, and tools’, identified during the previous year during the verification, the focus was placed on the Community and its formative role.

The ILS Provincial, Sr. Elide Degiovanni, referent for Formation at the Italian level, began the meeting by greeting the 36 Animators present, recalling the responsibility for the formation of the new generations and how this is not only the task of the Animator, but of the whole community.

After an initial moment with knowledge dynamics, the participants listened to the intervention of Mother Simona Corrado, Superior General of the Missionary Sisters of Queen of Peace, pedagogist, who offered a lectio divina on a Letter of St. Paul (1 Cor 12:12 -27).

This was followed by a time of reflection and personal prayer, which ended with participation in the Eucharistic celebration in the Basilica of Mary Help of Christians. The day ended with a pleasant recreation animated by the Postulants of the Most Holy Mary Consolata and the goodnight of the ILS Provincial, Sr. Elide Degiovanni.

The following day, the group continued the study with Mother Simona, who presented the key words of the theme: generativity, growing together, in community; and five movements proper to the verb generate: desire, conceive, bring into the world, take care, let go. The study of a case then engaged the Animators in group work and sharing in the assembly, during which they were able to get concretely into community dynamics.

The day was enriched by the discourse prepared and held by Sr. Piera Cavaglià on the theme, “The community is a privileged place of formation. Some early communities question us.” Sr. Piera, with her passion and enthusiasm, presented a glimpse of the life of the first FMA communities of Mornese, Turin, Catania, and Nizza Monferrato. In her presentation, they rediscovered the hardships and opportunities that even today are lived in community life, and also the strategies that the first communities put in place to be generative.

The day ended by listening to the intense and engaging testimony of three mothers, who shared their experience of generativity, highlighting some fundamental elements: making room, growing together, expressing love and gratitude, welcoming diversity, decentralizing, letting go to give life.

On the last day, 28 October, the group began with the Eucharistic celebration presided over by the Vicar General of the Salesians of Don Bosco, Fr. Stefano Martoglio, in Valdocco, at Don Bosco’s Rooms.

The work then continued by sharing the resonances on what Sr. Piera Cavaglià had presented and recovering the significant elements to take stock of the situation. In the second part of the morning, by province groups, an attempt was made to identify possible ways to give life together with formation communities in which to grow in generativity.

They were intense days full of content, which helped to review the methods of assuming the role of the Animator, gave much food for thought, and suggested strategies to help in reciprocity to give life to ever more generative community dynamics. Sharing enriched and encouraged everyone to take up the challenges with the attitude of those who love life and want it to continue to bear fruit.

Entry into the Postulancy – Vietnam

The Thanks of the FMA for the virtual pilgrimage – Spanish...