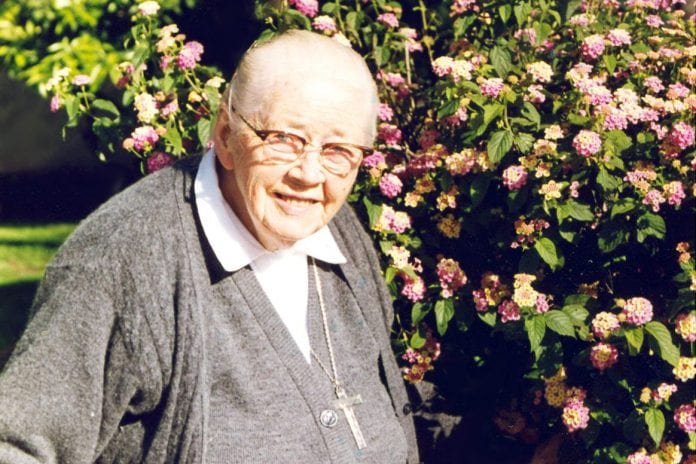 Rome (Italy). April 27, 2021 marks the 13th anniversary of birth into heaven of the Servant of God Sr. Antonieta Böhm, Daughter of Mary Help of Christians, born on September 22, 1907 in Bottrop (Germany), a town in the north between Rhineland and Westphalia. Antonieta  met the FMA in Essen-Borbeck to whom she expressed the desire to become a missionary.

With an apostolic heart, she lived for over 68 years as a missionary in Latin America. Her motherly and welcoming kindness,  generous and serene availability,  predilection for the poor, and the call to be the transparency of Mary Help of Christians in order to be her blessing hand  are the characteristics that the people who knew her testify about her.

Sr. Antonieta died on 27 April  2008, at the age of 100. In 2016, the process on her life and  virtues opened, which led to her being declared a Servant of God. On 7 May 2017, with the Solemn Eucharistic Celebration in the Cathedral of the city of Cautitlán in Mexico, the diocesan phase of the process of Beatification and Canonization was opened.

When the Church begins a process of canonization it has three purposes: imitation, intercession, cult. The most important purpose before intercession is imitation so that the Church may grow in holiness. For this reason, the commitment to spread the knowledge of the Servant of God is important, so that many people may be inspired by her way of living the Gospel, imitating her and invoking her intercession.

To promote the life and spirituality of the Servant of God Sr. Antonieta Böhm, the Office of the Cause of Canonization publishes on the Facebook Page, a video on an aspect of her life: missionary vocation, vocation as a nurse, devotion to the Child Jesus, devotion to St. Joseph, Marian devotion, etc.  On the 27th of each month, it also transmits from her little room the prayer of the Holy Rosary.

On the 13th anniversary of her Dies Natalis, the proposed video recalls her entry into Heaven on 27 April 2008, at “Villa Spem” of Coacalco in Mexico, in Mary Help of Christians Community in Our Lady of Guadalupe Province (MME).

The announcement of Sr. Antonieta’s death spread quickly. The following day, numerous groups of people who prayed the Holy Rosary uninterruptedly, arrived at Villa Spem. Professors, students, representatives of the Salesian Family, benefactors, and poor people whom she had helped participated in the Eucharistic celebrations celebrated for her by the Salesians of Don Bosco. Everyone wanted to be close to her, to have a souvenir, and a last blessing, placing flowers, medals, and rosaries on her coffin.

Her life continues to be a concrete example of the journey towards holiness according to the charism of Don Bosco and Mother Mazzarello and helps us to grow in true Marian devotion, so characteristic of her spirituality.

Antonieta Böhm was received into the FMA Institute on 19 January 1926, and made her Novitiate at Nizza Monferrato (Asti). On 5 August 1928, Sr. Antonietta made her First Profession.  On the day of her Perpetual Profession on 5 August 1934, she received the news that she was chosen to be a missionary for Patagonia (Argentina).  After the Pope’s blessing in Rome, she left for Latin America where she lived for more than 68 years, first in Argentina (1934-1965), then in Peru (1965-1969), and in Mexico (1969-2008). She was a music teacher, nurse, Vicar, Animator, and Provincial.  She lived her last 30 years of life in the ‘Villa Spem’ Community of Coacalco, where she was Vicar and Animator.

You are salt and light