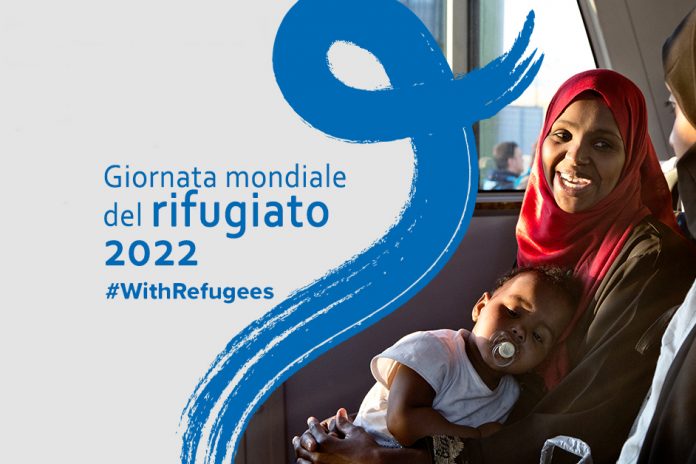 Rome (Italy). World Refugee Day is celebrated on 20 June 2022, approved by the United Nations and celebrated for the first time on 20 June 2001 to raise public awareness on the condition of millions of refugees and asylum seekers who, forced to flee from wars, violence, and persecutions, they leave their families, their homes, and their securities to seek safety in another Country.

According to the 1951 United Nations Refugee Convention, which defines the rights of those who have obtained asylum and the responsibilities of the nations that welcome them, a refugee is a person who has fled home and country due to “a well-founded fear of being persecuted because of race, religion, nationality, belonging to a particular social group or political opinion.” Many refugees are in exile to escape the effects of natural or man-made disasters, such as war conflicts.

According to the annual report by UNHCR, the UN Refugee Agency, at the end of 2021, people fleeing war, violence, persecution, and human rights violations were 89.3 million, an increase of 8% compared to the previous year and more than double the figure recorded 10 years ago.

After this Report, the Russian invasion of Ukraine and other emergencies – from Africa to Afghanistan to other areas of the world – have led to an increase in this figure, to exceed 100 million. At the same time, food shortages, inflation and the climate emergency are aggravating the already difficult conditions of these people.

“Whoever. Wherever. At any time. Everyone has the right to seek safety” is the theme of World Refugee Day 2022:

Whoever they are, people forced to flee must be treated with dignity. Anyone can ask for protection, regardless of who they are or what they believe in. Seeking a safe place is a human right.

Wherever they come from, people forced to flee should be welcomed. Refugees come from all over the world. To escape danger, they take any means: whether they travel by plane, on a boat or on foot, they should not be judged.

At any time, people forced to flee have the right to be protected: whatever the threat – war, violence, persecution – their life is precious and they must be protected.

World Refugee Day highlights the rights, needs, and dreams of refugees, urging public and political attention to put resources in place so that refugees can not only survive, but also rebuild their lives and be happy. Various initiatives organized on the occasion of World Refugee Day give rise to new projects and opportunities to support refugees on an ongoing basis.

Migrants and refugees are now an integral part of the fabric of the societies that welcome them, contributing, with their cultural and work, to social and economic growth. This is what Pope Francis highlights in the Message for the 108th World Day of Migrants and Refugees which will be celebrated on 25 September 2022, on the theme Building the Future with Migrants and Refugees.