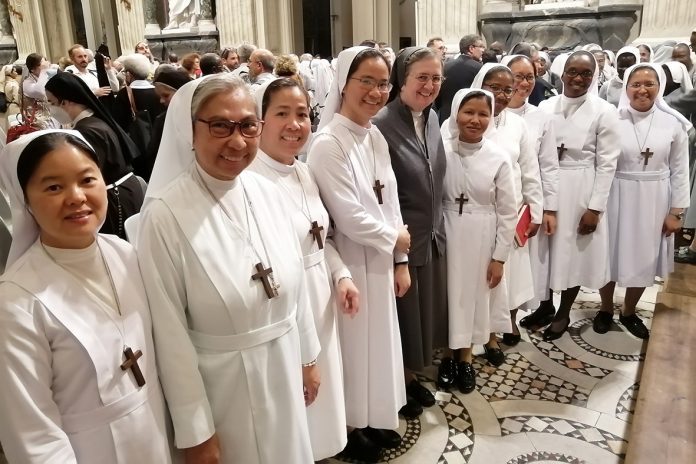 Rome (Italy). On 15 October 2022, on the occasion of Missionary October and close to World Mission Day, the Missionary Festival and the Prayer Vigil were held in the Basilica of St. John Lateran in Rome.

In the afternoon, in the courtyard of the Lateran Palace, the Missionary Festival was held on the theme. “You will be my witnesses” (Acts 1:8), from the Message of Pope Francis for World Mission Day, promoted by the Diocesan Missionary Center, by the Diocesan Council of Missionary Religious Institutes, and the Itinerant Missionary Fraternal Team (Efim).

During the Festival moments of animation and testimonies alternated with songs played by the music band 70X7. In addition, in the courtyard animated by music, colors, the lively creativity of the various missionary charisms, missionary exhibits were set up, while under the arcades, stands were arranged of organizations involved in the five continents.

The Missions Sector of the Institute of the Daughters of Mary Help of Christians, in collaboration with the Provincial Coordinator of the Missions ad gentes of the St. John Bosco Province (IRO), Sr. Ilaria Fara, and with the National Delegate for Missionary Animation Italy of the Salesians of Don Bosco, Fr. Francesco De Ruvo, set up a stand in which the mission lands where the FMA are present were shown.

At the same time, some FMA missionaries who are attending the Missionary Pastoral Refresher course at the Salesian Pontifical University (UPS) and some young people from the Missionary Animation of the IRO Province who lived the experience in mission in the summer of 2022, brought their missionary testimony by showing videos.

At the end of the afternoon, the participants went to the nearby Basilica of St. John in Lateran for the Missionary Vigil presided over by Msgr. Benoni Ambarus, Auxiliary Bishop of Rome, Diocesan Delegate for Charity and Migrants, during which 21 men and women religious belonging to various Institutes, who will leave for the mission ad gentes, including eight new missionaries and an FMA missionary, received the missionary mandate.

Present at the Vigil were the Superior General of the FMA Institute, Mother Chiara Cazzuola, some General Councilors, the Novices, and the FMA from the various houses in Rome, who participated in this particular moment of sending. In his homily, the Bishop urged the departing missionaries to trust in the Holy Spirit, with the certainty that He guides, works in each one and precedes them in the places where each one is sent.

In the name of the Church of Rome, Bishop Benoni then expressed his gratitude to those departing on behalf of the Church:

“We thank you for your willingness to leave. You go out into the world on behalf of us all. We have all received the gift of faith, thanks to the testimony of someone who gave us the example and testimony of faith. You leave, but we too want to renew the availability of our faith”.

At the end of the Missionary Vigil, Mother invited the new missionaries, the Sector collaborators, those who contributed to set up the stand and the preparation of the Vigil, to the International Novitiate Sister Teresa Valsè Pantellini in Rome for a time of fraternity, of simple, Salesian and ecclesial conviviality, a small concrete gesture of “You will be my witnesses”.

With the Immaculate Conception, generative communities in the heart of contemporaneity

Benedict XVI: Grateful dedication of service to the Lord