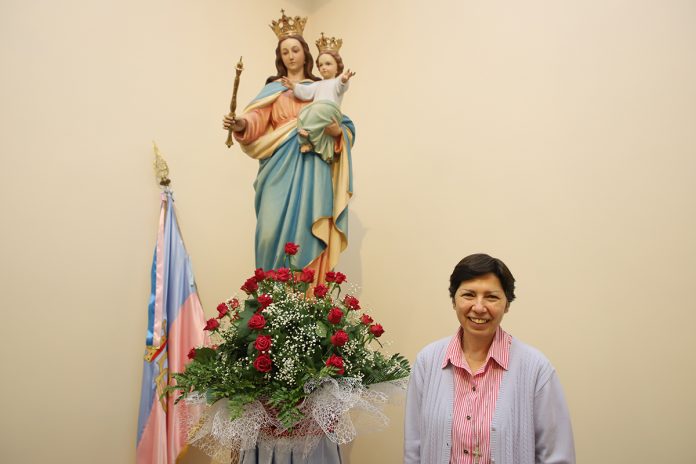 Rome (Italy). Sr. Marta Liliana Riccioli is the Visiting Councilor for the Institute of the Daughters of Mary Help of Christians.

Sr. Marta Liliana Riccioli was born on 20 December 1957, in Argentina. She participates in the XXIV GC General Chapter as Provincial of  “St. Francis Xavier” Province of Bahía Blanca (ABB), the land of the Three Holy Blesseds: Laura Vicuña, Zephyrinus Namuncurà and Artémides Zatti.

Her family roots gifted her with the experience of interculturality. Her grandparents were migrants in Argentina and she received a wealth of different cultures: Italian from Sicily, Spanish from Huelva, and Charrúa (indigenous) from Uruguay.

Since adolescence, she has always been a seeker of truth. She studied mathematics and taught it with great joy. She always wondered about the meaning of life and after various experiences, she found that meaning in Jesus. She  let herself be loved by Him and He  transformed her whole life. She felt His presence in the Eucharist, in the Word, in the experience of the youth group,  in the faith community of St. Francis de Sales, in the face of the poor children of the FMA Oratory of Almagro. God has always placed on her path people who have marked her life and accompanied her vocationally.

Mary has always been the motherly Presence that accompanied her journey of faith, of following Jesus. She truly felt like her daughter and through this experience, she became a Daughter of Mary Help of Christians.

As a Temporary Professed, she studied Pastoral Ministry at the Pontifical Faculty of Education “Auxilium” in Rome and celebrated Perpetual Profession in Mornese with a group of sisters, fellow students coming from different countries.

For a long time, her mission was Youth Ministry in various fields of animation at the local, provincial, national, and Southern Cone levels. The experience of living the mission shared with the laity and young people and as  Salesian Family continues to be a very valuable charismatic strength to this day.

She was Animator in Buenos Aires of the Communities of Almagro and Ciudad Evita; and in  southern Patagonia of Puerto Santa Cruz. For 8 years she lived in an insertion community in Barrio 22 of Enero-Buenos Aires, where the poor  became her teachers of life and of her faith. There she lived a strong ecclesial, and inter-congregational experience among the people,  and also with young volunteers from VIDES.

She began in 2015 as Provincial of the Argentine Province “St. Francis Xavier” (ABB) and at the end of the six-year period, her service was extended by two years, due to the process of national unification of the three Argentine Provinces (ABA-ABB-ARO ), which in 2023 will become one.

During the XXIV General Chapter, the Chapter Assembly elected her as Visiting Councilor. In this new mission that the Lord and the Help of Christians have entrusted to her, she is open and available to animate and govern in synodality and in communion with the whole FMA Institute.

Message from the young people to the participants in the GC...