Melbourne (Australia). The Triennial Verifica of the Southern Pacific Region (SPR) is taking place in Melbourne, Australia, from 11 to 15 May 2018.

Presiding is the Mother General of the Institute of the Daughters of Mary Help of Christians, Mother Yvonne Reungoat, together with Sr. Lucy Rose Ozhukayil, Visiting Councilor.

The biblical theme chosen by the Province is the meeting of Jesus with the Samaritan woman, which is in harmony with Strenna 2018 “Lord, give me this water” (Jn 4: 5-42), and will accompany each day’s work.

On the first day, the opening prayer focused on the theme “Lord, give me this water”. All participants were given an empty jar to be filled with water and shared among the members of their group. The SPR Province is surrounded by water, a reminder for all the sisters and laity coming from the Solomon Islands, from Samoa and Australia.

This was followed by Mother Yvonne’s talk on the theme “Remembering the Call” and then the whole day was dedicated to the development of the theme of the XXIII General Chapter on Pastoral Conversion.

On the second day, there were reflections on the FMA Constitutions and on the prophetic life as a testimony of the Educating Communities according to the guidelines of the XXIII General Chapter. In the morning, the reflection focused on the reality of the SPR Province and in the afternoon the group work gave space to dialog-confrontation starting with some questions and areas of attention: ecology, community life, pastoral accompaniment, Family, young people at risk, media …

On the third day in prayer, emphasis was placed on the journey as FMA in the personal encounter with Jesus to reach everyone like the Samaritan woman, no matter what gender, ethnicity, religion or lifestyle. The Samaritan woman did not return home but went to the village. At the end of the prayer, all the communities were given a candle as a symbol to continue to be light for one another and for those who are in the missions.

Mother then developed the theme “Here is the field where you must work“. She proposed some points for meditation: the young “our holy ground”; Don Bosco: a sign of God’s tenderness among the young; Mother Mazzarello: among young women with a feminine and Marian style; awaken the Oratorian and missionary heart; with young people; young missionaries of other young people.

In the afternoon, in group work, the participants were called to identify the prophetic signs in their own reality.

In the late afternoon, Sr. Lucy Rose Ozhuyakil presented the summary of the General Chapters emphasizing the unifying elements of the educational mission among young people.

After dinner, the young gathered to talk with Mother Yvonne, Sister Lucy, and all the FMA and novices. Present were young people from COSDU (Catholics of One Spirit Down Under), Don Bosco Camp, Cagliero Project, ASYC (Australian Salesian Youth Community) and Salesian Co-operators.

Mother Yvonne asked what the challenges are for the young and how to live a convinced faith in a secular society and be accompanied to deepen the faith as young adults. “In a secularized society like Australia, Salesian pedagogy can welcome any young person, whatever his/her faith or culture. Australia is the world! “.

The fourth day began with the dramatization of the Gospel passage of the Samaritan woman to emphasize that the woman left her jar of water, that is, she left what she did not need, to tell others about her marvelous encounter with Jesus.

Mother Yvonne then developed the theme ‘Together to be a prophecy of hope’, highlighting the need for a strong sense of communion with God and others, in particular the bond with the community and the young.

The participative and engaging methodology sees the participants actively involved in spaces for personal reflection, group work, assemblies, moments of fraternal conversation and relaxation. It continues the reflection in the afternoon with the unified presentation of the path of assumption of the Constitutions and discernment and identification of the theme for the GCXXIV.

The experience will end on May 15, 2018, on the Solemnity of Saint Mary Mazzarello, with the Eucharistic Celebration presided over by Fr. John Papworth; the concluding talk of Mother; and a cultural evening. On May 16, 2018 in Scoresby, Mother will receive the Perpetual Vows of Sister Bernadette Wauki, FMA. 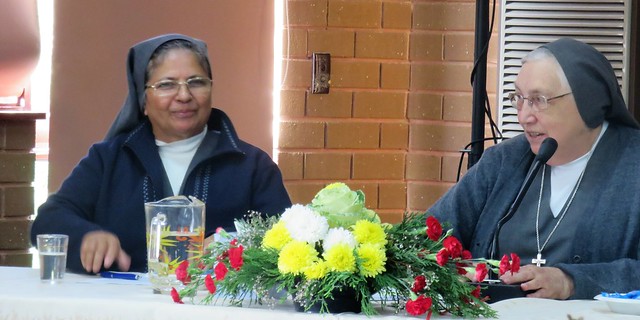 Feast of the Immaculate Conception: the “beautiful day”

Pope Francis in Cyprus and Greece

The educational motherhood of Mother Mazzarello

Mother Yvonne Reungoat receives the honor of Officer of the Legion...