Rome (Italy). From April 10 to 14, 2018, the Second Seminar for the Promotion of the Causes of Beatification and Canonization of the Salesian Family was held in Rome.

After the first Seminar, celebrated in April 2016, this was dedicated, in particular, to scientific assessment and theological evaluation of miracles.

There were about 90 participants among consecrated persons, lay people, and some diocesan priests. They were all representatives of 14 groups of the Salesian Family, witnessing how holiness is an element of communion and vitality in the charismatic Family, born of Don Bosco.

For the Institute of the Daughters of Mary Help of Christians Sr. Piera Cavaglià, Secretary General; the Vice Postulator Sister Sylwia Ciezkowska, and 14 FMA from different Provinces took part.

The Mother General of the Daughters of Mary Help of Christians, Sr. Yvonne Reungoat, gave the Goodnight, and the Rector Major, Fr Ángel Fernández Artime, offered the concluding reflection also in the light of Strenna 2018, focusing above all on the conviction that the Saints are our companions in the ways and in the life of the Spirit.

The aim of this Seminar – recalled Fr Pierluigi Cameroni, Postulator General of the Causes of Saints of the Salesian Family – is to foster, through relationships, experiences, moments of sharing, and work in groups, contents and processes that help in the ascertainment and accompaniment of presumed miracles.

To enhance the patrimony of holiness that flourished from Don Bosco and which reaches to this day, is to demonstrate the truth of the sentence pronounced by Don Rua after the death of the Holy Founder: “From now on this is our motto: the sanctity of the children is proof of the holiness of the Father”.

The Salesian Cardinal Angelo Amato, Prefect of the Congregation for the Causes of Saints, illustrated the value and necessity of miracles in the causes of beatification and canonization. “Miracles are the work of God’s power, divine charity, the advent of the kingdom of God. They are not events that go against the laws of nature, but rahter go beyond, often bringing our nature back to its original call to the fullness of life, like the many healings. In the miracle, faith transforms life in a tangible way. It is precisely to this fruitful encounter between faith and life that the path of the Church links the processes of beatification and canonization that it documents and fosters. A gift to be grateful for, but also a gift that is always renewed and renews us, if we are willing to receive it by asking, knocking, seeking, as the Gospel invites us to do without ever getting tired”.

Presented by the Postulator General, Fr Pierluigi Cameroni at the beginning of the Seminar was the path of Postulation between 2016 and 2018: an impressive journey for the beauty of the testimonies that come from the heroism, the graces, and the miracles of the many Servants of God, Venerables, Blesseds, and Saints originating from the charism of Don Bosco; and from the vivacity of the journeys of conversion of many people, who find new vigor for their faith, hope, and love, thanks to these sisters and brothers.

Following the presentation of the theme on “Discussion and medical-legal evaluation” in the procedure for ascertaining miracles, edited by Mgr. Boguslaw Turek, CSMA, Undersecretary of the Congregation for the Causes of Saints, group work was carried out in linguistic areas, where many of the ideas received were deepened and shared.

Msgr. Carmelo Pellegrino, Secretary of the Congregation and Promoter of the Faith, illustrated with competence and in an accessible way for all, the nature, the reasons, and the modalities of the theological process, second step of the Roman phase of the process, entrusted to a commission of nine theologians. He also exhibited the new path for Beatification and Canonization, opened with the recent Motu proprio “Maiorem ac dilectionem” by Pope Francis.

Dr. Lodovica Maria Zanet, a contributor to the Postulation of the Causes of the Salesian Family, illustrated clearly and systematically the steps prior to the Roman phase, which accompany and document the ecclesial pilgrimage of holiness which is every cause of Beatification, starting from ‘dies natalis’, that is, from the hour of the death of that brother and sister, who will then be indicated as a model to be venerated and followed.

Particular attention was given to intercession, where the faithful turn to those considered to be in full communion with God, so that with their prayers they may become mediators of an extraordinary intervention of God’s mercy, especially in cases of grave necessity. “Inter-cede means walking in the middle, and in this way to intervene in favor of. It is a relationship of trust and closeness, where our faith is the first to benefit from it; the more it is a community journey, the more it bears fruit and brings forward all those who get involved” was emphasized.

The life of the saints is in its entirety an ‘existential mediation’, so that their example and the ‘evangelical flavor’ of their life may be in favor of the faithful and make them grow.

The Carmelite, Father François-Marie Léthel, OCD, Professor of Spirituality at the Teresian of Rome and Consultor at the Congregation of Saints, presented the ‘girotondo dei santi’, that is, the theology of the Saints, “Light of Christ in the heart of the Church “.

Of particular relevance was the relationship between ‘scientia fidei’ and ‘scientia amoris’ and the Trinitarian Christocentrism of the saints between filiality and nuptiality starting from the theology of the Carmelite mystics. Among the examples of Saints who have lived a mystical experience, the Carmelite Professor quoted two exemplary figures of the Salesian Family: the theologian Fr. Giuseppe Quadrio, and the Salesian Cooperator Vera Grita (1923-1969) consecrated lay person, mystic of the Eucharist.

As Pope Francis says: “Holiness is the most beautiful face of the Church” and in this Seminar, it emerged that it is also the most beautiful face of the Salesian Family, because every Saint, Blessed, Venerable or Servant of God highlights some dimension of the beauty of the Lord Jesus and shows us a path of holiness, a true prophetic gift to the Church. The Causes of Beatification and Canonization are necessary for the Church and the Salesian Family not only because they enhance their charismatic vitality, but also because they help us to counteract the harmful tendency of worldliness, superficiality, and mediocrity that seems to advance at all levels.

All participants are convinced, as it emerged from the work groups and in the Assembly, that the Causes are an extraordinary gift of God, but at the same time, a shared responsibility for which to give thanks and to commit ourselves to communicate widely.

Photos  from the seminar are available on FlickrANS, while all materials and presentations can be found in the section on the sdb.org website. 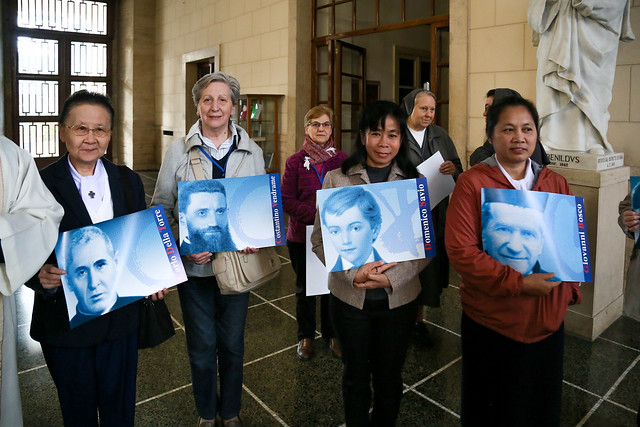 Week of Prayer for Christian Unity 2022

Walking with you, Main