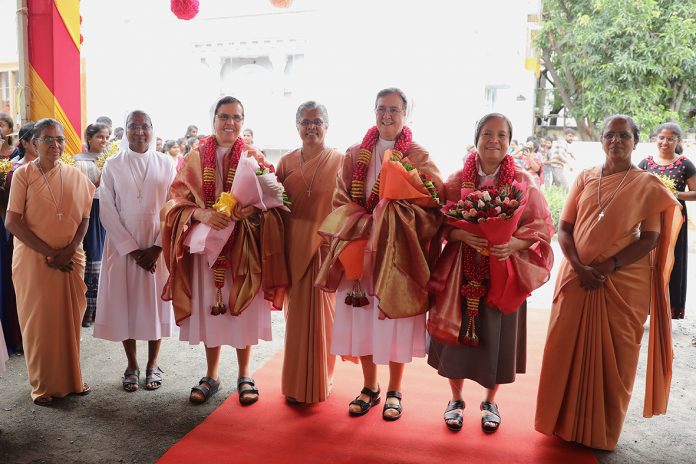 Chennai (India). On 31 August 2022, Mother Chiara Cazzuola, with the General Councilors Sr. Runita Borja and Sr. Ruth del Pilar Mora, was welcomed at the airport of Chennai, in the Province of St. Thomas the Apostle (INM), where the Celebrations take place for the Centenary of the presence of the Daughters of Mary Help of Christians in India.

On 22 November 1922, in fact, the first six FMA missionaries:  Sr. Teresa Balestra as Animator, Sr. Catherina Marnetto, Sr. Maria Angeleri, Sr. Luigina Appiano, Sr. Recommends Tarricone, and Sr. Teresa Merlo, led by Fr. Giorgio Tomatis, Salesian missionary of Don Bosco  arrived in Tanjore, in the state of Tamil Nadu where, with modest means, they began first with a cutting and sewing workshop for girls, then with a dispensary and an orphanage, and educational work, now extended to seven Provinces based in Chennai, Bombay, Calcutta, Guwahati, Bangalore, Shillong, and Tiruchirapalli.

Arriving from Bombay after their visit to the Province of St. Mary Mazzarello from 27 to 30 August, Mother and the Councilors received a warm welcome from the Provincial of Chennai, Sr. Nirmala Lazar, the Economer, and the Provincial Secretary, from the members of the Educating Community of the Fatima Matriculation School of Kodambakkam, the Salesians of Don Bosco, and some Past Pupils.

Waiting for them in a festive atmosphere in the Provincial House of Kodambakkam, were the students of the Fatima School, the girls from the Marialaya Reception Center in Nandambakkam, and the young residents of Our Lady’s Center.

The FMA of the communities of the Chennai area expressed their welcome by putting the garland and the ponnadai, the typical colored shawl, around the neck of the guests, while the students welcomed them with dances, rhythmic songs, and with arathi, as the Tamil culture uses. Mother Chiara returned the affection by thanking the whole Educating Community and praising them for their commitment and presence.

Accompanied by the Provincial and the FMA, Mother and the Councilors then went to the chapel for a brief moment of prayer, in which Mother Chiara lit the traditional Indian lamp (kuthuvilakku) and Sr. Nirmala recited a prayer of thanksgiving.

In the afternoon, they made a pilgrimage to places related to the life of St. Thomas the Apostle: Little Mount, Thomas Mount, and the Cathedral Church of Santhome. Significant was the Eucharistic Celebration in the crypt of the Basilica where the remains of St. Thomas are, presided over by Fr. Maria Arockiam Kanaga, Salesian of Don Bosco, Superior of the Vice Province of Mary Seat of Wisdom (UPS), who in his homily spoke of the historicity of the presence of St. Thomas the Apostle in India and of his martyrdom, for which Chennai is a holy place.

The day ended with Mother Chiara’s Goodnight, which underlined three aspects: Gratitude, at the beginning of the celebration of the Centenary of FMA presence in India, for the wonders that God has worked; the continuous presence of Mary in the FMA Institute, in India, and in the life of each one; and the example of St. Thomas to be followed in faith and courage, since he is the patron saint of the Province.

The visit of Mother and the General Councilors, and the added presence of Sr. Celine Jacob, Visiting Councilor who is making the Canonical Visit since 7 August to the INM Province, continues according to a special Triduum, with the knowledge of the educational, pastoral, and vocational realities and the meeting with young people, the FMA, and the Educating Communities, anxiously awaiting the official celebrations that will take place on 3 September 2022 at the Auxilium Campus in Katpadi, Vellore.

The festivities may be followed through direct streaming:

The Grand Finale of the Centenary Celebration will be at 4:30 AM in India (1:00 PM Italian time):