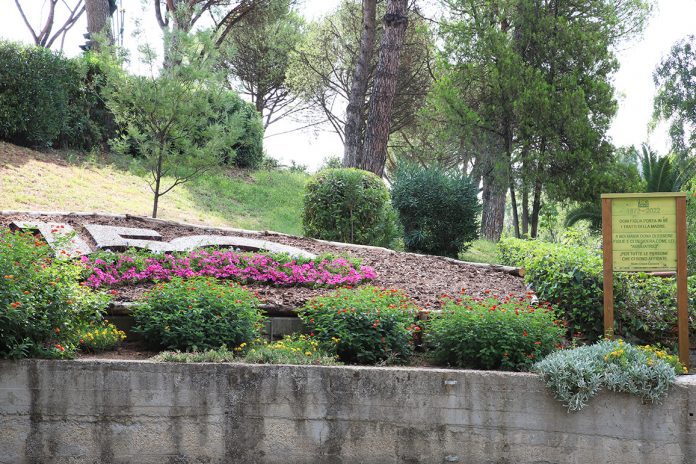 Rome (Italy). On the occasion of the 150th anniversary of the foundation of the Institute of the Daughters of Mary Help of Christians, a part of the garden of the Generalate (RCG), in Rome, was enhanced with charismatic contributions, in continuity with the Exhibit of the Charism that can be visited inside the building.

The idea was born from the sharing of the General Councilors with the Sisters of Mary Help of Christians Community, to offer a space in which the FMA, the young people, and all those who pass by the Generalate may have a first encounter with Mother Mazzarello, in response to what Mother asked for in Circular No. 1014:

“It is important and vital for the present and for the future of the Institute to strengthen at all levels and in all environments in which we are present, the capacity to welcome young people, so that they feel that the Institute is ‘home’ for them, that we are willing to walk together in building a world of universal fraternity and in following a path of global ecological conversion.”

The project also intends to take up the invitation to ecological conversion mandated by the XXIV General Chapter with the Deliberation, through the creation of panels, placed in nature, which invite contemplation, reflection, and prayer.

The path begins with a wooden panel that recalls the first feast of Mary Help of Christians at the Mornese Collegio:

“From the Cronistoria, 24 May 1872: It was the feast of the divine Mother and on that feast she, the ever-tender Mother, had wanted her daughters in the house prepared for them by her foreseeing love. After the Mass, she hurriedly arranges the workroom. Asking for silence that morning and expecting them to work as usual would have meant wanting the water to flow up.” Below follows the list of the names of the first 11 Daughters of Mary Help of Christians.

Further on, one can pause in front of some panels that present the most significant dates in the life of St. Mary Domenica Mazzarello and some traits of her spirituality:  love for Jesus and Mary, joy, apostolic charity that emerge from her Letters.

As a reminder that the life of Mother Mazzarello prolonged in the heart and daily life of the Educating Communities scattered throughout the five continents, in the garden one can find a totem pole with directional arrows and the geographical distance of the places where the first FMA house was founded in each of the five continents. 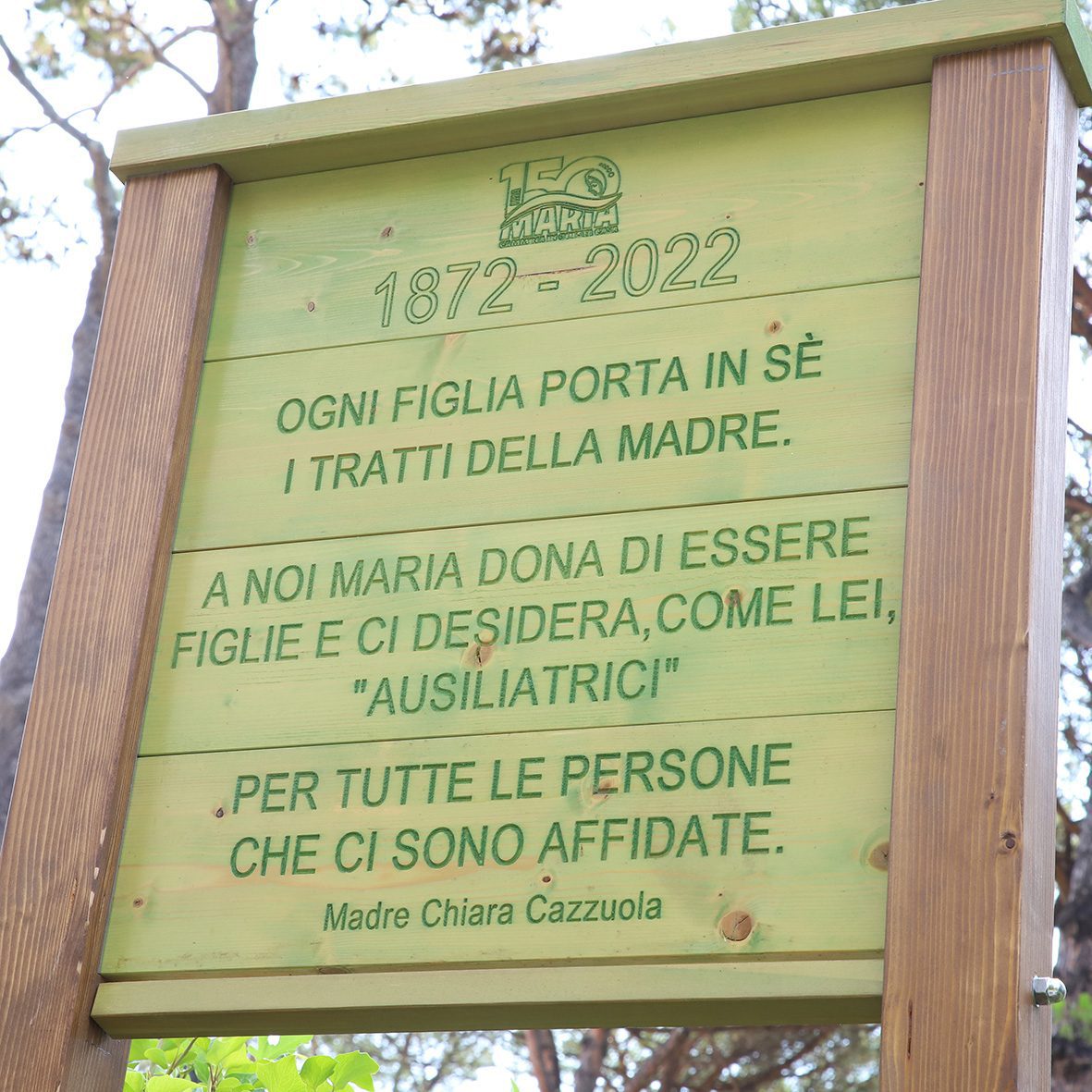 A flower bed was also created that reproduces the logo of the 150th anniversary, next to which there is a panel with the phrase that Mother Chiara Cazzuola sent as a wish and commitment to the FMA.

In Circular 1020, Mother announced another ‘charismatic touch’, which is underway:

“As a perennial reminder of this year, the Generalate will have a new and particular touch of ‘Mornese’ welcome: a statue of Mother Mazzarello placed in the garden, which portrays her seated, ready to dialogue with simplicity and familiarity with those who pause next to her”.

A tree will then be planted as a sign of the fruitful and lasting vitality of the Institute, which draws ever new energy from the Gospel and the Salesian Charism.

On 5 August 2022, at the end of a day of celebration, prayer, and grateful remembrance, the General Councilors at the headquarters and the Community of the Generalate prayed the Rosary in the garden, stopping in front of the panels to meditate on the words of Mother Mazzarello, in communion with all the FMA of the world.

At the end, the Vicar General, Sr. María del Rosario García Ribas, gave the Good night, inviting us to project ourselves into the future with patient charity, a distinctive trait of the FMA, as indicated by Don Bosco in the essential virtues proposed for the study of the Novices and the practice of the Professed in the Constitutions of 1885, which is now at the beginning of the current Constitutions. In fact, charity makes the community united and proactive and urges towards the mission.

Opening of the 150th – Preprovince ANG