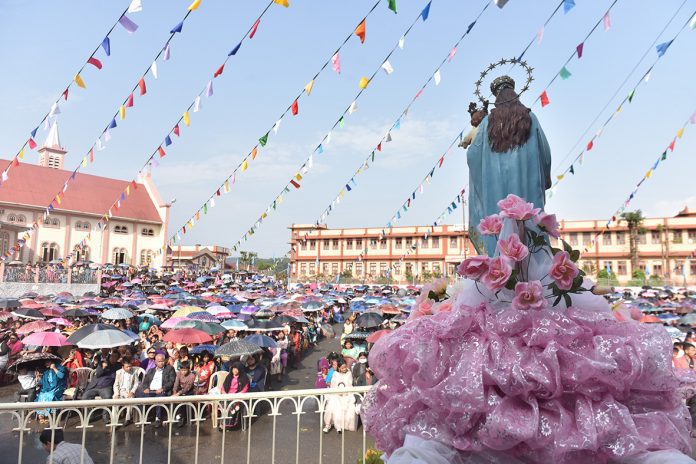 Mawlai (India). On 22 May 2022, to commemorate the 100th anniversary of the first Marian procession held in the Khasi Jaintia region, the parish of Mawlai-Shillong, in collaboration with the Salesians of Don Bosco of the Shillong Province, celebrated a solemn Marian procession.

During the First World War, the German Salvatorian Fathers who had carried out a great work of evangelization in Northeast India were deported and this mission land was left almost unattended. In 1921, the Sacred Congregation Propaganda Fidei entrusted this mission to the Salesians of Don Bosco. 11 Salesian missionaries, led by Fr. Louis Matthias, arrived in Shillong, then the capital of north-east India, on 13 January 1922.

The missionaries, animated by the spirit of the Da mihi Animas, entered Divine Savior church in Shillong that same day, to have the Lord’s blessing on their apostolate. One of the Salesian Coadjutors exclaimed that Our Lady of Don Bosco had preceded them in this land, in fact they saw a wooden statue of their beloved Madonna in the church. The German Fathers who had purchased it in Trento, Italy, venerated it with the title of Queen of the Apostles and had taken it on this mission.

On 24 May 1922, the Salesians celebrated a solemn candlelight Marian procession by in Shillong. There were only 600 participants, but a large crowd of non-Catholics witnessed the solemn event they saw for the first time in amazement. At the end of the procession, the 11 Salesian missionaries knelt in front of the statue of Mary Help of Christians and consecrated the whole of northeastern India to her protection and her maternal intervention. On 10 April 1936, the Church of the Divine Savior caught fire and since then the statue has been kept at the Salesian Novitiate in Shillong, Meghalaya.

The procession began with the Eucharistic celebration presided over by the SDB Provincial, Fr. Paul O. Lyngkot, and concelebrated by 24 other priests. The parish priest solemnly welcomed the celebrants and the faithful, including some government officials, and other personalities. In his homily, the Provincial spoke of the role Mary played in the history of redemption and urged the faithful to “listen to Jesus”, the source of true peace.

– In 1942, during World War II, the Japanese army advanced to Kohima, Nagaland, in northeastern India. The Japanese had sent their airplanes on three occasions to bomb Shillong. The planes had to retreat without completing their mission, as each time a very dense cloud covered the area causing poor visibility. This is one of the reasons why the state is called Meghalaya, ‘the abode of the clouds’. Believers attribute this fact to the intervention of Our Lady.

– In 1962, there was the Chinese invasion of North East India. The venerable Bishop Stephen Ferrando SDB, then Bishop of Shillong, was in Rome for the Second Vatican Council with his Secretary, Bishop Pietro Bianchi, SDB. The Bishop asked his Secretary to go and consult St. Padre Pio. As soon as the Saint saw Fr. Bianchi, and before Fr. Bianchi spoke, the Saint said, “Father, you have come from so far to meet me, tell your Bishops that there is nothing to fear. Our Lady reminds us that north-east India is consecrated to Her and no evil will happen.” Three days after this meeting, the Chinese army withdrew.

The Procession of Mary Help of Christians concluded with Eucharistic Adoration animated by Fr. Richard Majaw, Vicar General of the Archdiocese of Shillong.

It all began with a Hail Mary