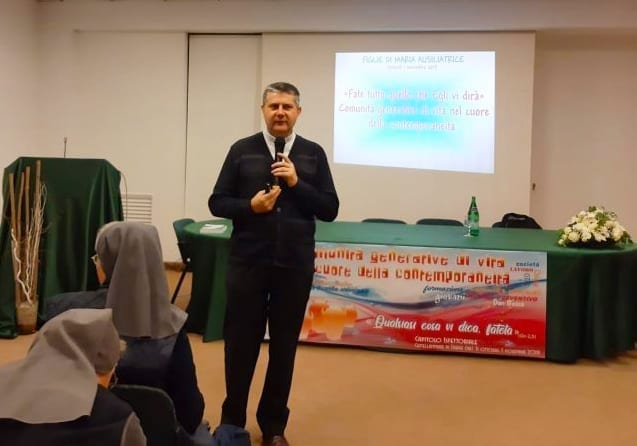 Castellammare di Stabia (Italy). At the Hotel of the Congresses in Castellammare di Stabia (Naples-Italy), Our Lady of Good Counsel (IMR), the FMA and lay participants, joined the various Regions and Countries of Southern Italy, Malta, and Albania Province – 84 people, including 67 FMA, 1 novice, 1 SDB, and 15 lay people to celebrate, from 31 October to 3 November 2019, the Provincial Chapter on the theme: “Communities that generate life in the heart of contemporaneity”.

The Provincial Chapter opened with the greetings of Sr. Marija Peče, Visiting Councilor on the Canonical Visitation of the IMR Province, of the Provincial Sr. Maria Rosaria Tagliaferri, of the young person Annarita Chierchia, of Clara Cordaro, Salesian Cooperator, and of Fr. Gianpaolo Roma in the name of the Provincial of the Salesians, who addressed the capitulars words of hope and the invitation to live this time of particular grace in the light of the Spirit to discern the new steps of life that they are called to make as a Province and as an Institute.

After the introductory greetings, the celebration of the Word takes place “Do whatever he tells you”, punctuated by the invocation to the Holy Spirit and to Mary, woman of the new wine. This intense period of prayer concluded with the illuminating lectio of Fr. Alessandro Valentino , Episcopal Vicar for the Laity of the Diocese of Nola, on the passage of the Wedding at Cana, followed by the sharing of personal resonances in work groups.

At the end of the evening, the Provincial presented to the Assembly the report of the six years of the life of the Province, woven with the red thread of the re-signification process, outlining the paths taken, the key words, the processes activated, and recalling that the journey is made by going in a spirit of asceticism and in the style of synodality.

The second day of the Provincial Chapter begins with the solemn celebration of Lauds and the Eucharist of the Feast of All Saints, followed by the report of Fr. Rossano Sala, SDB on the theme of General Chapter XXIV: “Do whatever he tells you“. Communities that generate life in the heart of contemporaneity. In a masterly summary, Fr. Rossano underlines the objective of the Chapter: “to reawaken the freshness of the vocational fruitfulness of the Institute.” It is a moment of discernment, in a time of epochal change. Taking up the three actions of the Synod on young people, he emphasizes that an authentic discernment is modulated on three verbs: RECOGNIZING: having open eyes and ears and a closed mouth to listen and see carefully what reality and young people have to say; INTERPRET in the light of the Spirit and with educational and maternal solicitude, the appeals received that must touch, impact, change; CHOOSING true discernment can only end with clear choices for a pastoral renewal.

The last two days saw the Chapter members and invited guests to the Provincial Chapter work with a spirit of belonging to the Institute and the Province and with a lively sense of co-responsibility. The synthesis of the contributions of the 30 educating communities was studied and discussed with regard to the three questions proposed by Mother General in the Letter In preparation for the XXIV General Chapter, a synthesis prepared by a pre-chapter Commission. It was a synodal work that engaged most of the days, in which moments of study and sharing in groups alternated with moments of assembly.

All of this culminated on the last day when the Chapter members experienced three fundamental moments in the light of the Spirit: the approval of the final document of the Provincial Chapter, the proposals to be sent to the Moderator of the General Chapter, and the election of the two Delegates, with the relative Substitutes, who will participate together with the Provincial in the next General Chapter.

The Provincial Chapter concluded with thanksgiving to the Lord in the Eucharistic Celebration presided by the Provincial of the Salesians, Fr. Angelo Santorsola. At the end of the Eucharist, the Provincial, Sr. Mara, gave each chapter member a small amphora with the Word of God that accompanied the Provincial Community on this chapter journey: “Do whatever he tells you“, in memory of this event that will mark the next six years of the Institute and the Province.

You can be a saint wherever you are